It’s crunch time at Miradoro, the bistro at Tinhorn Creek Estate Winery near Oliver, BC. A black-clad server polishes a delicate Riedel wine glass with a white cloth. Another carefully rearranges cutlery and napkins at a table on the wrap-around deck, thirty metres above the valley floor, where grapevines march in rows this way and that like curly green soldiers. At the bar, restaurant owner Manuel Ferreira sips hot coffee and catches up on paperwork. Lunch service begins in less than 30 minutes.

The kitchen door swings open, and out strides a burly fellow, over six feet, baseball hat covering his bald head, and bare arms sporting a sleeve of tattoos. This is Miradoro’s executive chef, Jeff Van Geest, and the latest inductee into the BC Restaurant Hall of Fame. He shakes my hand in his huge one, and we wend our way back into the small, U-shaped kitchen, where no fewer than six other cooks bustle around, prepping for the lunch service. 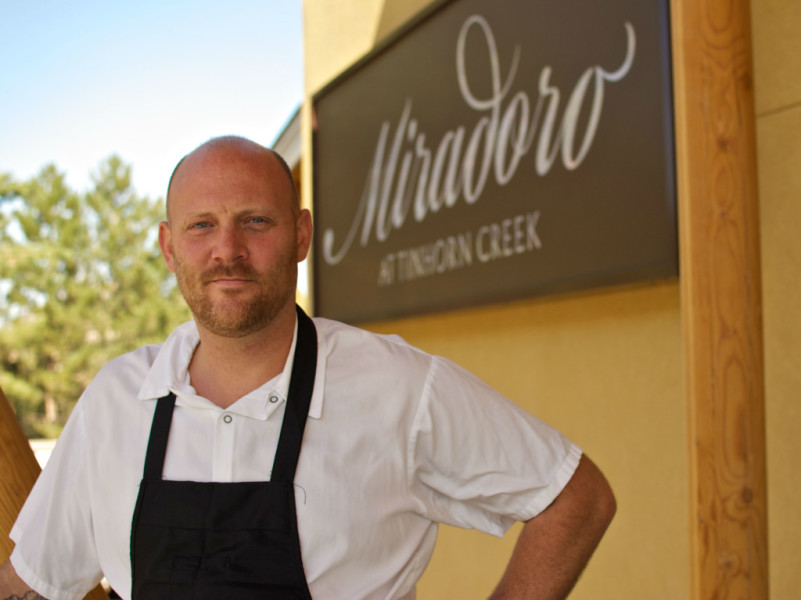 Van Geest has been the executive chef at Miradoro at Tinhorn Creek in Oliver for the past four years. There is much to celebrate at Tinhorn Creek in 2014. The successful winery is commemorating twenty years in business in the much-vaunted ‘Golden Mile’ of the South Okanagan. It’s grown from a mere 15 acres in 1994, with a production of 1,000 cases, to over 130 acres and 40,000 cases for 2014. The ‘estate’ started with just one building, but now houses a barrel room, a tasting room and shop, an outdoor amphitheater, Miradoro, and now, a Hall of Fame chef.

“It’s a huge honour,” he says, as we squeeze into a tight corner of the back kitchen near the walk-in. He’s just finished training a couple of new dishwashers, and is about to prep tri-coloured baby eggplants and finger-sized yellow and green zucchinis that just came in from a local farmer for the lunch service.

Trained at Vancouver Community College and apprenticed at Bishop’s, Van Geest eventually opened his own restaurant, Aurora Bistro, where his philosophy of respect for fresh, local, and sustainable ingredients ruled. After closing Aurora Bistro, Van Geest became the executive chef at Diva at the Met in the Metropolitan Hotel.

He found the lifestyle in Vancouver overwhelming, so took some time off one summer to live in the Okanagan with his wife and young son. He cooked in a few places, worked at a few wineries. His family liked the “country” lifestyle, and were looking to move permanently to a smaller town, when restaurateur Manuel Ferreira (formerly of Le Gavroche, and similarly looking to escape the city) came knocking.

“It was too good to pass up,” Van Geest says. He was given carte blanche to create his own menu. The only thing on site was a pizza oven. Van Geest had previously considered opening a Spanish tapas restaurant, so decided to explore a Mediterranean-influenced menu, seasonally-based, and locally-sourced. “It’s authentic, but modern. Rustic roots, but modern techniques, and a more modern plating technique. My goal is to create approachable fine dining.”

Given the amazing bounty of fresh produce, meats and cheeses that the Okanagan Valley provides, Van Geest changes the menu five times a year in the ten months that Miradoro is open. Even though the menu changes every two months, he may still make small changes, swapping out vegetables or other seasonal elements based on what’s available and fresh. 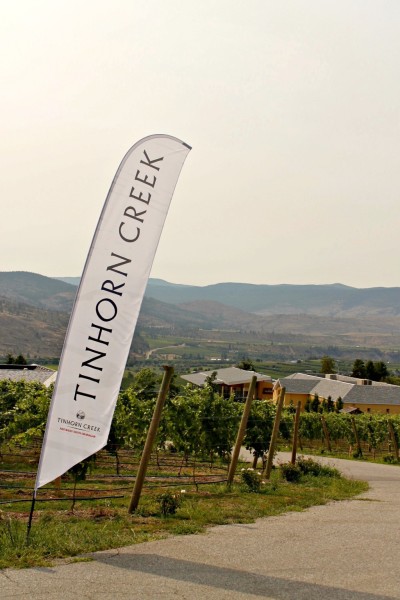 “I like to play with what’s coming in the back door,” he grins, as a sous-chef steps up and asks the chef to taste a sauce, and we have to get out of the way of another one as he loads vacuum-sealed bags of quail into the sous vide machine just to our right for a gentle half-hour simmer. To our left is a tall pan rack loaded with trays of fresh pasta drying—orecchiette and spagettini.

And play he does—the menu features lighter fare, shared plates, pizza, and solid standards. They do a true, thin-crust Neapolitan-style pizza. Van Geest’s favorite is his local take on a Hawaiian–confit of garlic, smoked mozzarella, pancetta, and peaches. 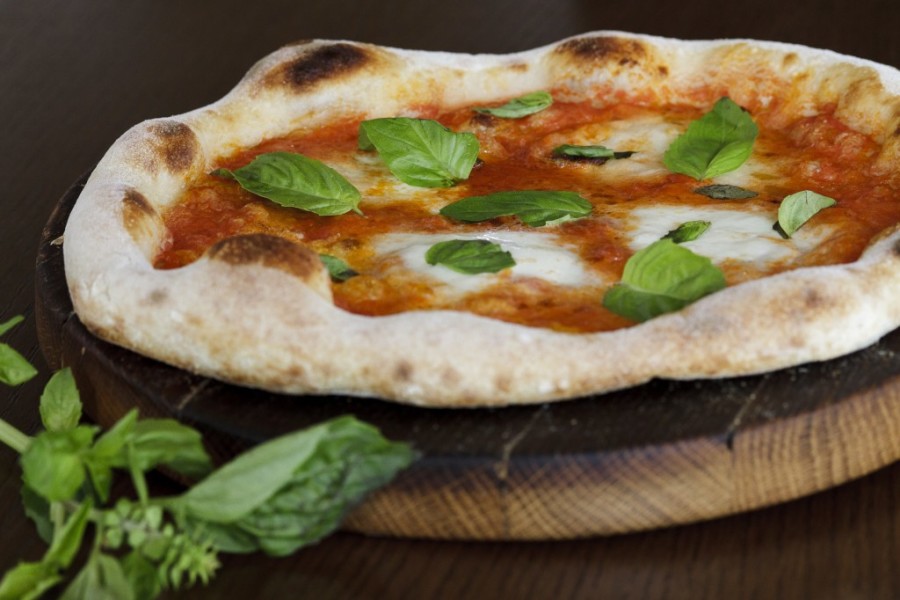 Miradoro is part of the Ocean Wise program, and you’ll find sustainably harvested salmon, ling cod, and clams gracing the menu. But his sense of “play” is most apparent in the local Arctic Char escabeche (a technique where you “cook” the fish in acid, similar to a ceviche). It’s served with pickled vegetables, sorrel, rye crisps, and local berries.

No Mediterranean menu would be complete without pasta, and Chef Van Geest’s take on a carbonara includes locally-sourced boar bacon. The sous-vide quail, another ingredient in abundance in the Okanagan, is infused with honey and fresh herbs, and then delicately grilled. 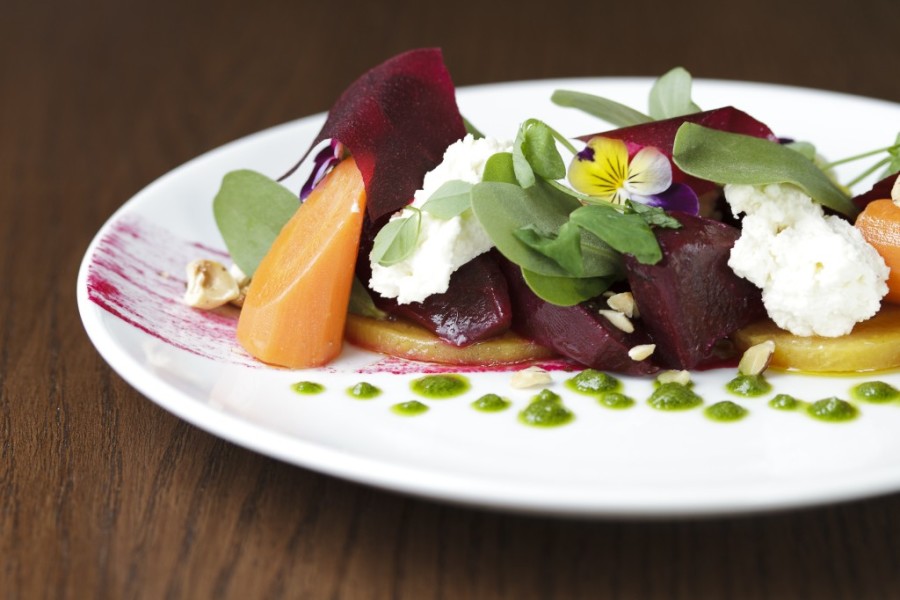 When I quiz him about his Hall of Fame induction, he’s grateful, but slightly embarrassed. He feels he’s still a young chef with so much more to come. When I ask him about the future, he says, “I’m in it for the long haul. I love it here.”

One of his line cooks now needs to plug in the ice-cream maker where we’re standing, so we wrap it up. Hall of Fame member or not, in a few minutes Miradoro will open for lunch service, and Van Geest is responsible for every plate that leaves his kitchen. He quickly tastes a noodle for toothesomeness, and then adds some microgreens to a plate as a finishing touch. And that is the real life of a chef.