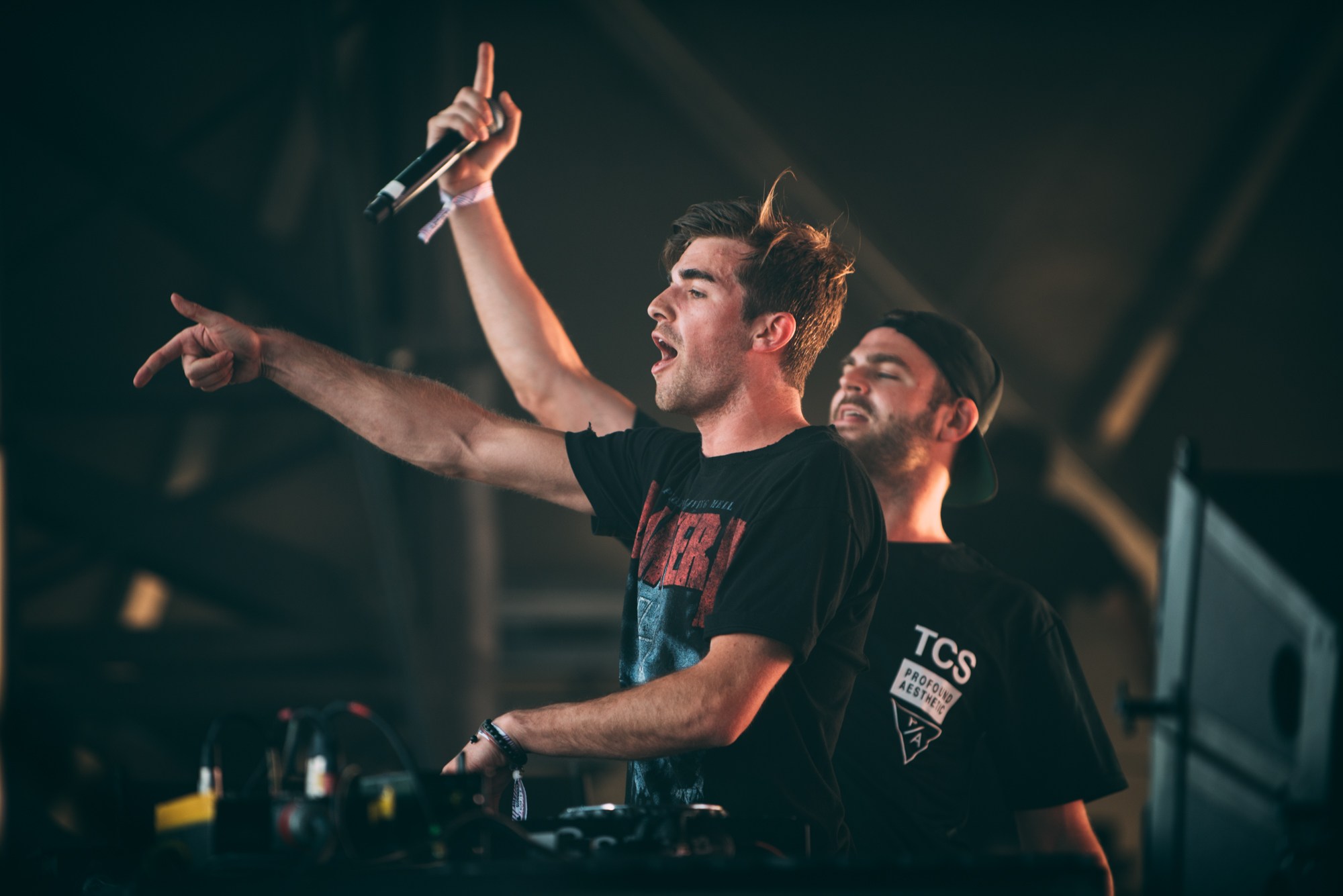 Two years after the surprise success of their love-it-or-hate-it “#Selfie”, The Chainsmokers have gone from being one-hit-wonders to dropping one hit after another.

“Don’t Let Me Down” has been been a fixture on Billboard’s Top Ten chart all summer long, and “Closer”, their brand new duet with Halsey, topped the iTunes chart after just one day on sale. But don’t think for a second that their newly-minted superstar status has affected the duo in the least.

“We hold ourselves to high standards to make cool music that we’re proud of,” says Chainsmoker Alex Pall in an exclusive interview with The Daily Hive, “(but) we’re just two frat boy-type dudes that love to drink and hang out.”

We chatted with the DJ about his party-rock anthems, his production style, and the pressure involved when crafting those famous block rockin’ beats.

Congratulations on the success of “Closer”. What can you tell us about the song?

We wrote it on our Friend Zone tour last year with our buddy Shawn Frank. We tapped into our relationship problems, and “Closer” is about running into an ex-girlfriend that’s super hot, and then remembering all the reasons why you hate that person.

Halsey has been one of those artists we’ve admired so much over the last two years and we hit her up. She was really into the song and we thought she added the perfect flavour. She’s a badass chick – super authentic and cool. She killed it, and “Closer” is such an awesome follow up to everything we’ve done until now. It was also really cool because we were singing on it which is a big step for us (fellow Chainsmoker Drew Taggart shares lead vocals with Halsey on the track).

“Don’t Let Me Down” is already a monster success, and people are already predicting that “Closer” will be the song of the summer. Is there a pressure in the studio to create these big hits or does it happen accidentally?

We only put pressure on ourselves – we don’t feel pressure from the world. We just go in there and try to do the best that we can do and make something interesting and fresh. We wrote “Closer” back in November and it’s just coming out now; “Don’t Let Me Down” was done in March of last year. It’s really tough…we’re on such an amazing label and they know what they’re doing. We trust everything they say. But we can’t put out another song that we love tomorrow because it’ll only hurt (“Closer”). Our biggest struggle is being patient. The best song we ever wrote is done, and I have no idea when it’s going to come out (laughs).

A lot of pieces written about The Chainsmokers mention how you’ve “grown leaps and bounds” since “#Selfie”. Do you think the song is unfairly maligned? Or do you think it gets the credit it deserves?

It’s tough because so many people look at that song as a piece of crap. It’s an anomaly in terms of the music we made before and after that. It taught us a lot about the music business and about ourselves and it wasn’t ever intended to be the song that it became.

At the end of the day you have to look at it objectively and be like ‘yo, this song sold 10 million copies…’. We wrote the lyrics ourselves, we produced it, and there’s a lot to be said about that. Drew and I always look back and talk about whether it was a good thing or a bad thing. But I think it was a good thing in terms of the fact that we’re here now and everything is going great.

You guys started a YouTube tutorial series called “How We Made It” to help up-and-coming producers hone their craft. How’s that going?

I think the problem with a lot of producers nowadays is they think everything’s a big secret, you know? If they teach someone how to do something, or give out a sound, then they’ll ruin their whole careers, or that person will come along and steal their thunder. We don’t take that approach – we take pride in the fact that we can help people become better producers. I would say the majority of the world gives zero shits about how we made “Roses”, but the 0.1% that do are really grateful. In an industry where’s there’s so much ghost production and so much smoke and mirrors, we really wanted to show people that the music is coming from us.

What can fans expect at a typical Chainsmokers show?

We’re always trying to change that. A lot of top guys haven’t changed their set in two years! That’s like boring to us. We want to play new music, try new things. If we’re not enjoying ourselves, then it’s going to show in our performance. We’re all about evolving with the sounds that are popular and playing things that people are going to enjoy. People are just coming to have a good time and rage and get laid, and we’re just there to facilitate that.

Canada continues to be one of The Chainsmokers’ biggest markets, and the love affair is clearly mutual. “They’re amazing,” Pall says of his Canadian fans. “It’s one of our favourite places to come tour. There’s something about a country that has a terrible winter and then a great summer. They latch onto music during the winter and then in summer, it’s time to party.”

As for future plans, the duo have a slew of concerts lined up in Europe and Asia and Pall promises some “new, experimental shit” in their sets. “We always want to switch the boundaries of our music, and we don’t ever want to have anyone predict what we’re doing next,” he says.

Photo provided by Brandon Artis. Connect with him at @_brandonartis.