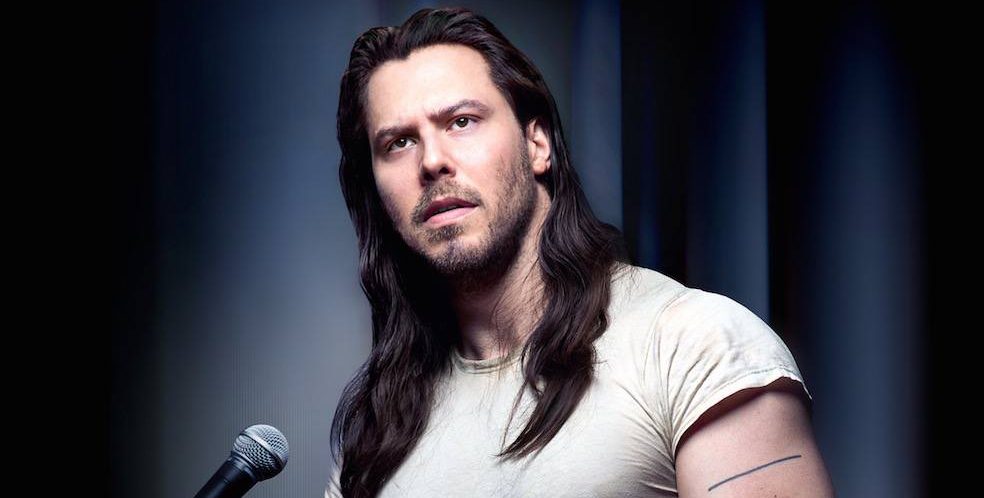 In New York, a place notorious for its cynicism, resides Andrew Fetterly Wilkes-Krier — Andrew W.K., for short. W.K. introduced himself to the music world in 2001 with his album I Get Wet, a fist-pumping manifesto of loud, fun-loving anthems like “It’s Time To Party” and “Party Hard.”

Since then, he’s become an advice columnist for the Village Voice, a motivational speaker, an author, and even started his own political party (called — what else — the Party Party), in an effort to share his message of positive partying.

Though when asked where he is exactly, he won’t name New York or any other city he may physically be at the present time. Instead, he says that he’s “neither here nor there” — an answer that, while outwardly vague, is actually quite telling of what the Party King all about.

This is not to be enigmatic or disobliging. On the contrary, he’s incredibly humble and immediately dismisses any notion of being called an artist or a type of philosopher out of respect for those who dedicate themselves to such disciplines. Positive partying is, quite simply, his cause and something that he tries to relay within various avenues. It’s hard to define succinctly, he says, but it’s basically about being alive and deciding to be happy about that, whether we like it or not.

“I think one can decide to interpret even the seemingly bad parts about life or even the hard parts of life as somehow wrapped up in a transcendent positivity,” W.K. explains. “That to come into existence is to come into a state of plus-ness, on the positive. You could say that to not exist is an absence and to exist is a presence — we would normally associate presence with positivity and absence with negativity. It’s not only that simple, but both of these polarities are sort of wrapped up in a holistic goodness. You know, the yin and yang. It’s hard to separate these two qualities, yet at the same time we can look at the phenomenon of negative and positive as a sort of entirety of positivity.”

W.K. has famously had critics question his authenticity or disregard him as contrived, but the truth of that matter is this: W.K. is completely sincere. Yes, he is a performer. A great one, in fact. But, he also wholly believes in what he preaches. Every single thing that he does, from his music to his political platform, is an attempt to cultivate the most joy of out life as humanly conceivable, both for the good of himself and of others. A song like “Party Til You Puke” is supposed to make you smile. It’s an approach that responds to a dark place that exists internally within W.K. The bottom line is, he’s just trying to cheer everyone up, including himself.

“I’m someone who has really struggled with maintaining an optimistic point of view, so I’ve always made attempts personally to work within certain mindsets that allow me to look at the world in a way that feels better or that makes me stronger, so that I can experience more of the world and not have to shut out parts of the world that are intimidating or challenging or even painful,” W.K. says. “I try to bolster myself enough that I can be as fully alive as possible. Maybe some folks can relate to that, but I think a lot of other folks are more advanced than that and are probably moved beyond these needs. But for those people who are looking for something that gives them an increased ability to feel good, then maybe they can take something away from one of my, well, offerings.”

W.K. has been candid about his longtime grapple with depression. In one particular column for the Village Voice, a reader penned in for advice on how to deal with perpetually bad feelings and asked W.K. how he stays so positive. W.K. sympathized with the reader, detailing his own experiences (“Sometimes it’s been a lingering feeling in the back of my head that something isn’t right, and that something is me,” he wrote. “Other times it has been a full-blown physically incapacitating despair,”). He then responded with the sentiment that depression can sometimes be like growing pains, but it’s how we direct that pain to use it for something beautiful.

“I’m trying to find little ways through the day to make it through — I guess like anybody else,” W.K. says. “In compared to other folks, I maybe haven’t struggled as much. I mean, I’ve had a lot of benefits in my life and have been very fortunate on just about every level. I try to stay very aware of that, very grateful for those advantages, try to use those, take advantage of those advantages for as much as their worth and hopefully again to not only give back to the people who have given me opportunities, but hopefully offer something that other people could find useful. I would like to be of service to my fellow man and woman, and not just in service to my own self and my own ambitions, so I try to make my ambitions in line with this idea of cheering people up and encouraging each other, sort of like a pep rally to the human spirit, to the human spirit that can go every day, all day — and that’s my mission, that’s my cause, that’s my purpose.”

He continues, “I’ve been able to eventually find that, personally, in music — that’s what’s really worked for me, high energy music. But also talking, like we’re doing right now. That’s another very effective way, very efficient way of conjuring up some of these feelings, some of these mechanisms, these tools that can give us access to those little glimpses of truth, or little glimpse of a shadow cast by truth.”

It was partly that intensity of the unknown that drew him to New York, where he moved in 1998. But he also felt compelled to go to the city. “It was really hard,” he says. “I knew that it would be and not very fun in many ways, but sometimes you get those little brief sentences of destiny about where you’re supposed to go and you don’t know exactly why or what would come of it. I didn’t move there thinking that the things I’ve done were going to happen. I never even really dreamed of these things.”

To be fair, it would be difficult to dream up all of the remarkable things that W.K. has achieved so far. How do you imagine being a living mechanism for conjuring sensations of enthusiasm? But that’s just what he is — a cheerleader for the human spirit. As for what’s next for the Party King, W.K. has been steadily making music, working on a new album he promises will be released soon and is about to embark on a 50-state speaking tour of the U.S., The Power Of Partying, to spread his message to the masses. The party rages on, indeed.

“I’m always trying to very desperately develop the strength to see more, to encounter more, to question more,” W.K. says. “To question everything, you know, to question first and foremost myself and to embrace that kind of doubt. It’s kind of tiring in a way, but it keeps things moving.”

“What’s the point of having a mind or a brain if you’re not thinking about anything anymore, not wondering about things?”