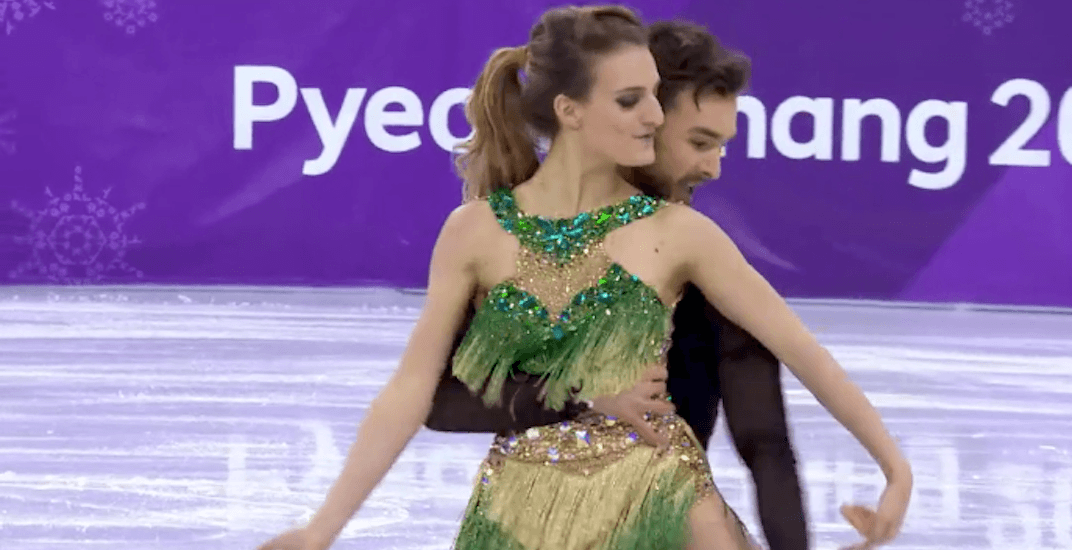 Amongst the many competitors in Olympic ice dance, the world’s attention was split between Canada and France.

France’s​ Gabriella Papadakis and Guillaume Cizeron finished close behind them, but not without overcoming an almost disastrous wardrobe malfunction.

Gabriella Papadakis experiences a costume malfunction with her dress for the second time this week, according to @KurtBrowning

The clasp at the back of her halter snapped.

Bad luck and a distraction for the experienced French pair. pic.twitter.com/F6quTbadWu

The duo did a remarkable job of maintaining their routine, but thanks to a slow-motion replay that exposed the woman’s left chest, the entire world was made known of the incident.

I am dying for this French ice dancer. To be an Olympic athlete killing your routine and have a tit pop out mid-routine. It’s just a nipple but you know this is her legacy now. Gah. #IceDancing #FRA

The only thing worse than a live tv #nipslip is a slow motion replay of said nip slip on live tv. #CBCOlympics #2018WinterOlympics #IceDancing

Watching #Olympics2018 #IceDancing. Poor girl had a #nipslip and I died a thousand deaths. Good for her though. She powered thru! pic.twitter.com/fiXLmj87cZ

Um was there just a #nipslip during Ice Dancing? #WinterOlympics2018 #IceDancing

Its like @jtimberlake was her partner on the ice. I wonder if the French planned it like JT and Janet did? #nipslip #IceDancing #Olympics #whenscurlingstart

While many were quick to freak out over the incident, the young skater was also commended and hugely supported for her ice-cool composure.

I applaud her for continuing to give her all with the distraction/embarrassment of having her nipple exposed. That’s showbiz baby #icedancing #TeamFrance

There was a nip slip at the Olympics. That skater is a God damn hero! It’s ok girl you skated through it. You could have pulled a Tonya and instead you were a damn champion! #Olympics #IceDancing #olympicchampion #nipslip

Let’s focus on what talent @GabriellaPks has. Not a stupid wardrobe malfunction. Like this is what she wants to be remembered for… ps #nipslip is so in right now anyways. 🇫🇷 #2018WinterOlympics #IceDancing

Oh the #NipSlip but you have to give her credit, she didn’t let that get in the way of skating. #IceDancing #FreeTheNipple

Seriously, a million points to Gabriella Papadakis for just saying “Fuck it” when her dress broke and skating with her entire boob out. That is a bad bitch. 🇫🇷⛸⛸

A lot of question also fell upon the broadcasters and commentators, who were put under fire for replaying and exposing the mishap in a full, slow-motion replay.

Wow @CBCOlympics get your shit together. I will show more respect than you did and not mention the actual incident. But whatever director just chose that slow-mo shot should be fired. How utterly disrespectful. #IceDancing

“Luckily she had enough straps to hold her costume in place” says commentator as they air a slowmow that shows her nipple sticking out! #yikes #cbc #IceDancing #pyeongchang2018 #nipslip #wardrobemalfunction #olympics

Way to go @CBC. It wasn’t just a nip slip – that figure skater’s whole breast was exposed and @CBCOlympics chose to slow mo and focus in on it too. #CBCOlympics #wardrobemalfunction #IceDancing #Ratings

Whoa major wardrobe malfunction in the #IceDancing. I love how the commentators are saying how it’s a good thing she has straps so it was fine as they clearly show her nipple in slow motion on the replay.

Broadcasters have however, explained that the event was aired live with no tape delay, and that they had zero control over being able to censor or remove the mishap.

Regardless of what happened, a world of support goes to the French duo, who managed to fight to a second place finish – right behind Virtue and Moir. Their next challenge lies in mentally overcoming the mishap in time for the free dance competition, which takes place later today.