Brice Royer stunned Vancouver with his heartfelt generosity just last month, and now friends are returning the favour after his cancer took a turn for the worse.

Royer is previously known for publishing a Craigslist ad selling unconditional love for $0. His story touched the lives of many, especially when people found out he was struggling with a cancer diagnosis. With a rare GIST (Gastrointestinal stromal tumour), Royer has developed numerous food allergies, now restricting him to a diet of only carrots.

According to Royer’s blog, carrots are the only food he can eat without pain. He has lost 30 pounds and weighs in at only 100 to 110 pounds at a height of 5’11”. Though he takes vitamins, he has experienced malnutrition and anemia.

To Royer’s surprise, friends found a unique way to support him through his ordeal.

“Friends and strangers surprised me with this picture. Yes, I cried a bit,” Royer wrote on his blog. 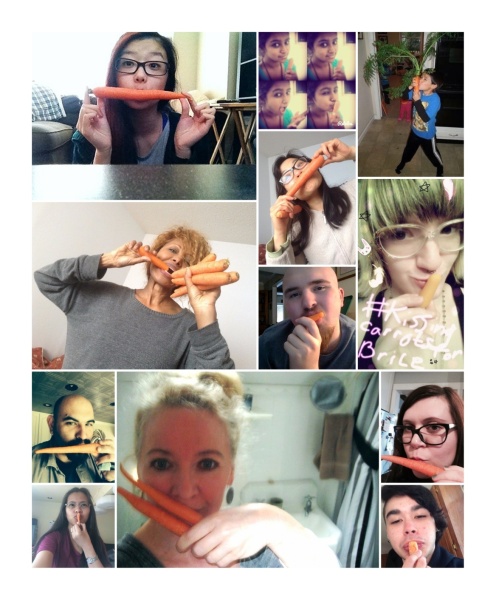 Since then, #EatsCarrotsForBrice has found its way onto Twitter where many are adding their support to the cause.

Royer hopes people will take the time to recognize World Allergy Week and post a picture of themselves eating or kissing a carrot on April 19.

“I just hope you have fun, enjoy carrots, and raise awareness of allergies. I’m happy enough that my pain turned into something meaningful for everyone.”