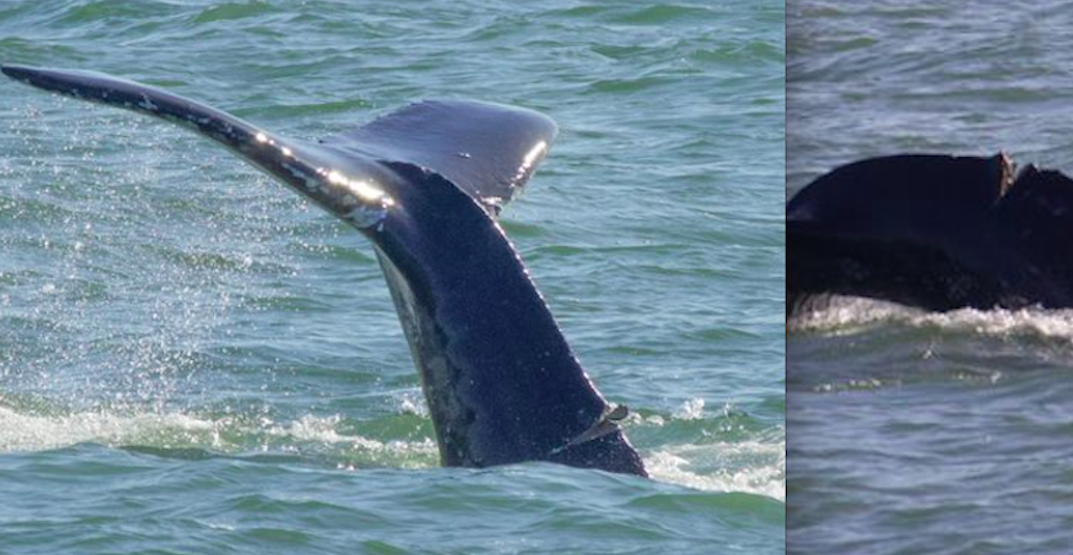 Whale researchers and conservationists are asking Vancouver-area boaters to exercise extreme care to prevent further harm to an injured humpback whale that was recently spotted swimming near Point Grey.

According to Ocean Wise researchers, the whale has been observed with a deep cut on its tailstock, believed to be a strike wound from a vessel.

The whale had been observed swimming in the Point Grey area since early April. On April 11, crew aboard a Prince of Whales Whale Watching Vessel photographed the whale with a deep laceration behind its dorsal fin, researchers said.

“This is a very upsetting situation because it is all too common,” said Jessica Scott, Applied Research Biologist at Ocean Wise and manager of the Ocean Wise-administered BC Cetacean Sightings Network, a citizen science program that focuses on boater education and ship strike prevention. “It is precisely for this reason that Ocean Wise created the citizen science-driven WhaleReport Alert System.”

Ongoing collaborative efforts by Ocean Wise, Fisheries and Oceans Canada, Prince of Whales, Ocean Ecoventures and the Humpback Whales of the Salish Sea Project are in place to monitor the humpback.

In the meantime, boaters are reminded that if they spot the whale, they are required by law to slow down to below seven knots when within 1,000 metres and give the whale a minimum of 100 metres of space.

“Humpback whales are especially prone to ship strikes because they exhibit random travel patterns, remaining submerged for over 15 minutes in some cases, and because of their tendency to feed at the surface,” said Scott. “They can surface suddenly and without warning.”

As such, for both boater and whale safety, “it is important to operate vessels carefully in areas of known whale density, and to keep an eye out for signs of whale presence, such as blows, splashes, or aggregations of birds,” she added.