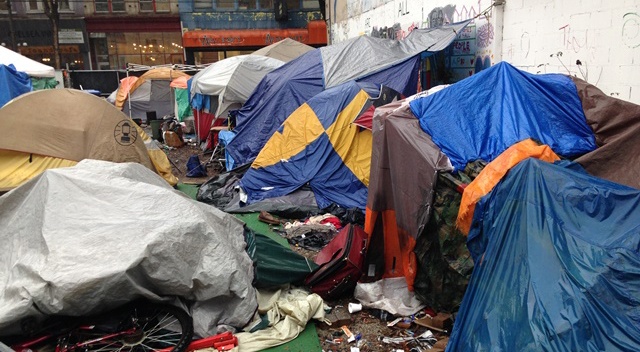 The tent city at 58 West Hastings (City of Vancouver)

The BC Supreme Court has granted an injunction to the City of Vancouver backing the eviction of residents of a homeless camp on West Hastings.

The City broke up the camp at 58 West Hastings Street towards the end of October, saying conditions posed a danger to everyone there.

The judgement means all remaining campers have to leave by 6 pm on Thursday next.

Lawyer and housing campaigner DJ Larkin of Pivot Legal Society represented the residents of the homeless camp in court.

Speaking outside the courthouse, Larkin said the City needs to acknowledge people need somewhere safe to be for the winter.

“You can go around the City right now in the Downtown Eastside and in other neighbourhoods and you will see tents everywhere,” said Larkin. “It’s about to start raining again and the City needs to make people safe.”

DJ Larkin w/ @pivotlegal “We are in the middle of a housing crisis. The city is moving in the wrong direction here.” pic.twitter.com/TTtYVpDMhK

According to a release, the City will keep trying to help residents of the camp at 58 West Hastings find alternative shelter and housing options.

“For the dozen or so campers remaining at 58 West Hastings who wish to move to the shelter spaces now available, City Housing outreach staff will continue to assist with relocation of people and their belongings,’ said the release.

The camp has been causing concern since it sprung up on a City-owned vacant lot in July, said the release, with more than 65 calls to police made, and four assaults reported.

It also said more than 20 emergency calls for service have been made from the camp, with the Fire Chief twice ordering the removal of fire hazards.

Earlier this year, Mayor Gregor Robertson pledged to build 100% subsidized housing and a health centre on the site of the West Hastings homeless camp in coming years.