It’s a warm, sunny summer day in late-July in Vancouver and the streets are vibrant and alive with people and a multitude of outdoor events all season long. Outdoor public spaces such as parks, beaches and the city’s extensive seawall system become hotspots and crowded play areas.

After all, being a Vancouverite also means you have accepted the conditions of living in an climate that deprives you of sunlight and warm weather for half of the year. On average, it rains 161 days per year and the average daily high is no more than 10°C for nearly a six month period.

Rain and cold weather significantly dampers the number of shoppers on Granville and Robson Streets, Vancouver’s busiest and most significant retail corridors, while indoor shopping areas like Pacific Centre become much more crowded than usual as they are the places to be for comfortable and convenient shopping – to stay dry and warm.

Large outdoor festivals and events are few to nonexistent during these periods as it’s no secret that weather plays a major factor for attendance. Case in point: the Fair at the PNE looks like an abandoned fairground in the summer months when it rains and the temporary open-air Empire Stadium quickly lost its novelty when rainfall put a dent to the Lions and Whitecaps’ attendance numbers. To top it off, much less people are seen enjoying outdoor recreational options and strolling through the city’s parks and beaches.

Our enduring rain defines so much of who we are to the point it even spawned a popular micro-blog that largely ran on self-deprecating humour over our collective understanding of what it means to be living in Vancouver’s wet climate.

I could continue stating the painful obvious, but all this begs the question of why Vancouver and its surrounding suburban cities have not designed public spaces and shopping areas that are better suit for our weather.

Part of Vancouver’s entertainment and nightlife lacklustre comes from the lack of indoor or even covered public spaces for people to convene at, and when it rains the only option for many could very well be to stay at home. There is nothing different about Vancouver from other cities around the world in that we prefer comfortable, convenient and practical places to shop.

The region also suffers from deplorable street front weather and element protection design, where awnings are either non-existent or poorly thought out. These flawed awnings leak onto pedestrians below, are built in with gaps that do not allow for continuous protection, and are far too narrow to provide any real cover from the elements.

Staying dry from business to business on the same city block also proves to be a challenge without the hassle of pulling a wet umbrella up and down constantly.

As part of an extensive redevelopment project that will add eleven towers as high as 45-storeys, Oakridge Centre’s retail area will double in size from 700,000 square feet to 1.4-million square feet. While some of the indoor mall areas will be retained and improved, much of the mall’s new retail will be from the introduction of outdoor oriented urban retail space centred around a new pedestrian-only high street. 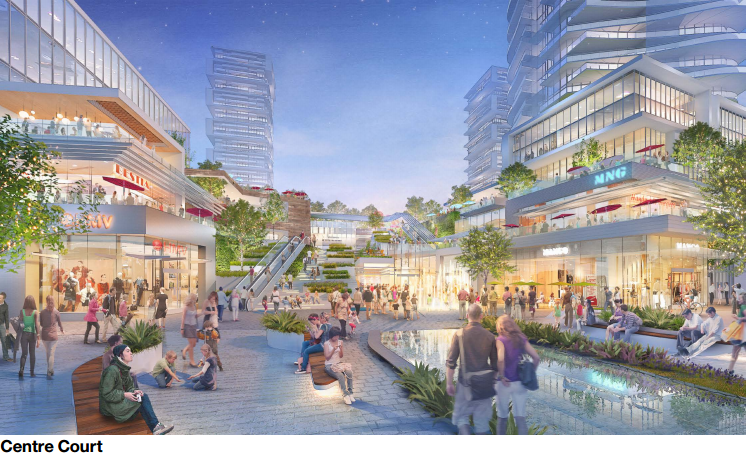 Ten towers as tall as 60-storeys are being incorporated into the Brentwood Town Centre on a large parking lot site between the existing 500,000 square foot indoor mall and SkyTrain station. The existing mall will be largely retained and improved while an additional 500,000 square feet of outdoor oriented urban retail space will be built around new pedestrian-only public areas including a high street. 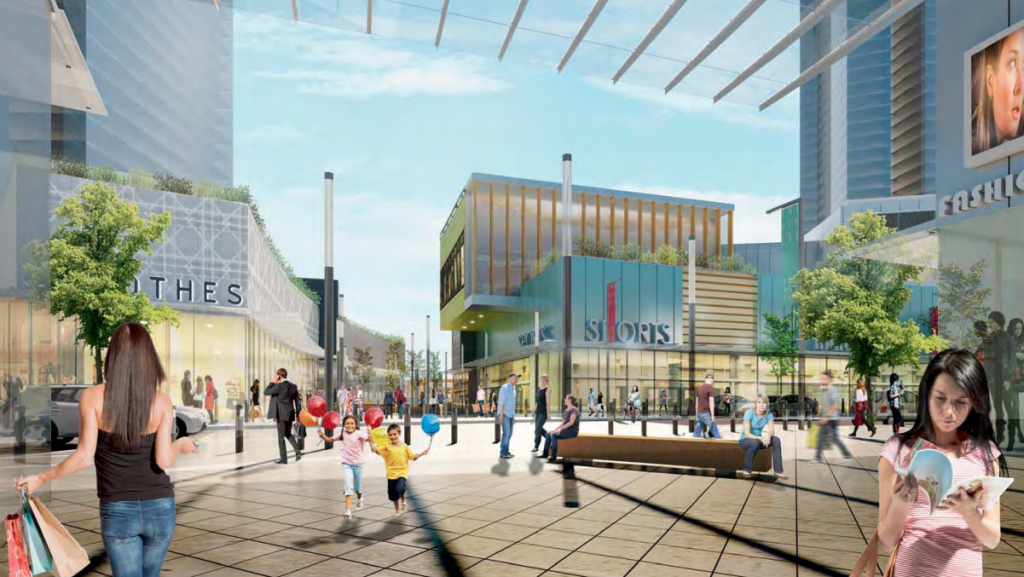 Plans are underway to redevelop Lougheed Town Centre in the same fashion as Brentwood Town Centre, although it will not share the same extensive retail experience. Lougheed will be rebuilt with housing and both open-air and covered retail options. The project is currently in the early phase of creating a draft of the redevelopment master plan.

Vancouver’s newest mall is located at Vancouver International Airport on Sea Island. The 377,000 square foot shopping centre is billed as a luxury designer outlet centre and is expected to carry hundreds of the most sought worldwide brands.

However, the entire mall is open-air and is built around a network of pedestrian-only public spaces. It is also directly under the busy low-flying flight path of YVR’s North Runway, which is only 700-metres away from the new mall. Construction is underway, its first phase opens in spring 2015. 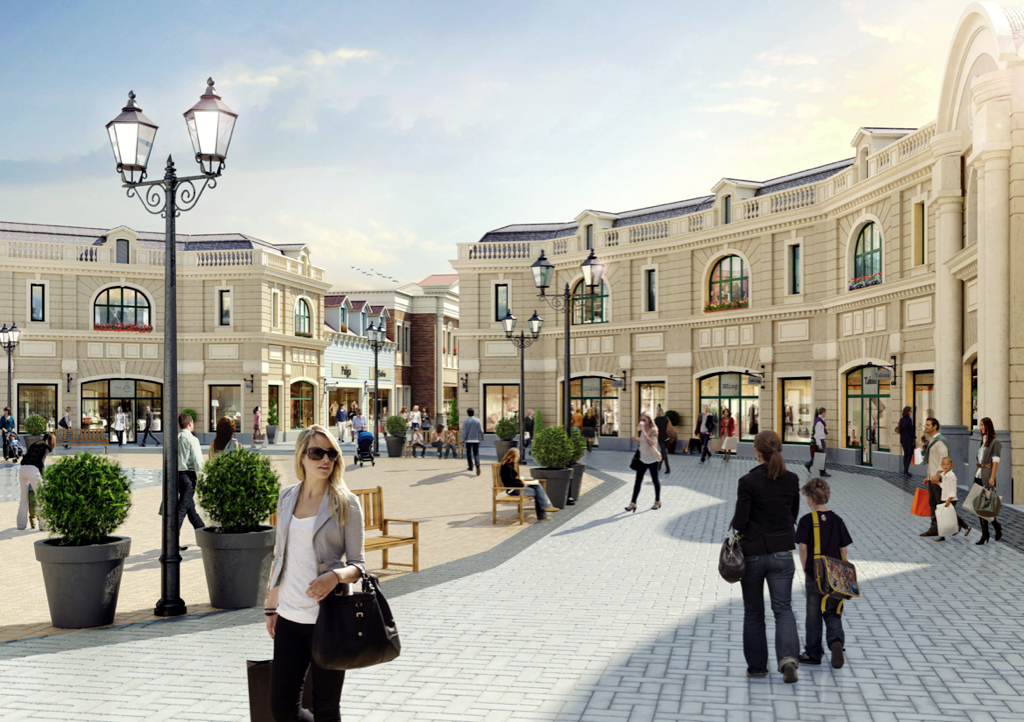 Park Royal at West Vancouver is currently undergoing a major expansion that will include major indoor and outdoor components. The Park Royal Village outdoor area will undergo further expansion in the coming years. 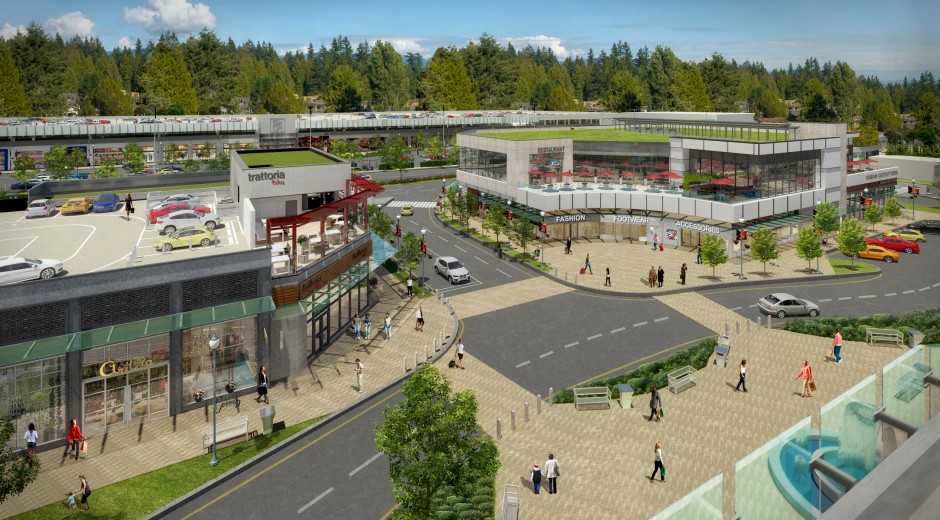 All of these upcoming shopping centre development projects follow similar outdoor retail concepts with insufficient weather and element protection design. However, they are far from being the organic retail options you would see in city streets as the vast spaces are controlled and managed by a single operator – the mall owners.

Charles Gauthier, the president and CEO of the Downtown Vancouver Business Improvement Association, agrees that indoor shopping malls are the primary, major draw although he also sees benefits in both indoor malls and outdoor street retail.

“In downtown Vancouver, we have Pacific Centre and with our climate, a mall like that will definitely be an attraction and a regional draw. I think if we only had street level retail, we would be challenged,” said Gauthier. “Malls have done a very good job in North America with appealing to the general consumer, they have the control of one physical space with that one leadership and single ownership. They are able to control the mix of retail in their properties – they are attuned to the needs of the consumer.”

“To some extent, Pacific Centre Mall and Hudson’s Bay act as a big magnet – they are the main anchors in downtown, and pretty soon you can also add in Nordstrom as part of that interconnectivity. Altogether it is the sun of the solar system and you have the other planets circling the sun,” added Gauthier.

Of course, there is also a flip side as there are some disadvantages relating to the uniformity of shops between mall to mall. However, he thinks we have a good mix between indoor malls and street level retail, which fills in the gaps and makes downtown much more of a destination.

While a significantly larger Pacific Centre mall could provide a larger draw for downtown and an overall net gain in its share of the region’s retail market, it could potentially cannibalize street retail in downtown and the results would likely go against the City’s policies of creating a pedestrian-oriented city core.

While no major addition is in sight for Pacific Centre, it is currently undergoing a small expansion into the basement level space that was previously occupied by the men’s department of Sears. Approximately 16 new stores and the new Robson Street entrance are expected to open in late-2014.

It remains to be seen how the future outdoor versions of Oakridge Centre and Brentwood Town Centre will perform, whether they will be able to enjoy the same or greater number of customers, and it is arguably also an odd decision to build YVR Vancouver Airport Outlet Mall as an outdoor shopping destination.

The latest trend to build outdoor shopping malls instead of new and expanded indoor destinations could prove to be an expensive fad concocted by the preferences of urban planners rather than the practical preferences of consumers based on convenience and comfort.

After all, this isn’t California. You can shop indoors anytime, but in rain, snow and cold? Not so much.

Do you prefer indoor malls or outdoor street retail? Let us know by commenting below.