I’m pretty sure everyone from Vancouver has eaten Chinese and Indian cuisine. But what about Indian style Chinese food? Or is it Chinese style Indian food? Sounds intriguing! For a taste of Indian-Chinese fusion, you have to try out Green Lettuce Restaurant on Kingsway near Victoria Drive. These two cuisines can be the perfect fusion when prepared by the right chef. For certain, you’ll thoroughly enjoy the unique blend of the two.

Green Lettuce, which symbolizes good luck at Chinese New Year, was the very first Indian style Chinese food restaurant in Canada when it opened in 1999 by owners Winston and Peter – and since then has acquired a very loyal following. Both owners are ethnic Chinese, but born and raised in Calcutta, India – the metropolis located on the eastern side of India. Since then, they have continued to own and operate their restaurant with the help of extended family, like the smiling and personable Lucy Chang as hostess. 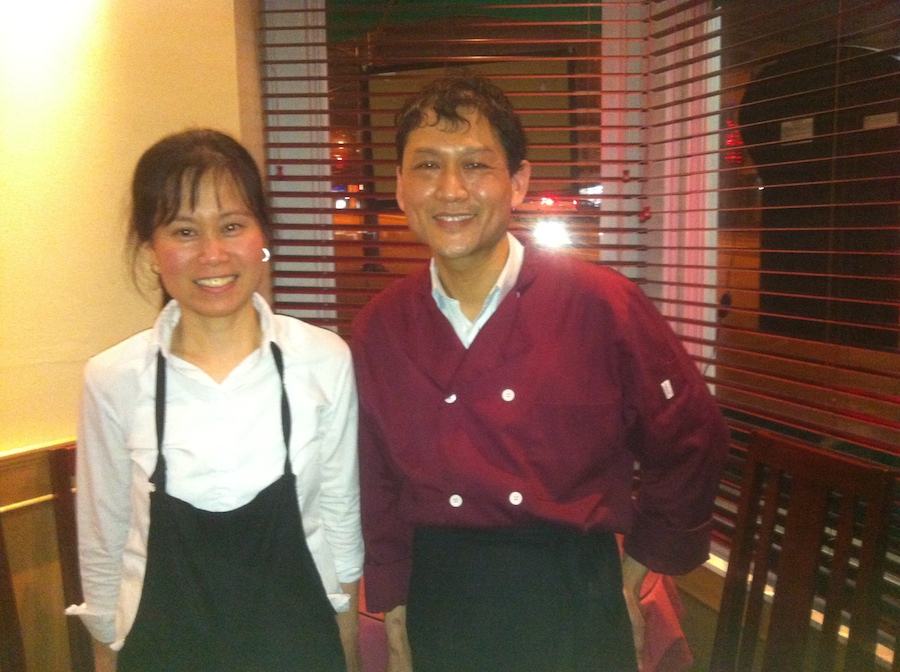 The family is dedicated to serving healthy and quality food that is unique given the flavour profile of Indian food within Chinese dishes. The seasonings, curries and ingredients do originate from both India and China, and you’ll find a mix of predominantly Chinese flavoured as well as Indian flavoured dishes.

This mix of cuisines is something that has definitely won over visitors as it takes both and elevates the taste to another level.

We started by trying the Chicken Lettuce Wrap as an appetizer. It had chicken, crispy noodles, water chestnuts, cilantro, onions, red peppers and carrots that you can wrap inside the lettuce. It was spicy, but not too spicy, and the crispy noodles provides good texture. There is a bit of a strong flavour from the cilantro but overall it’s a very light dish that’s a good start to the meal. “Light with a bite” was the description, and that’s what it was. 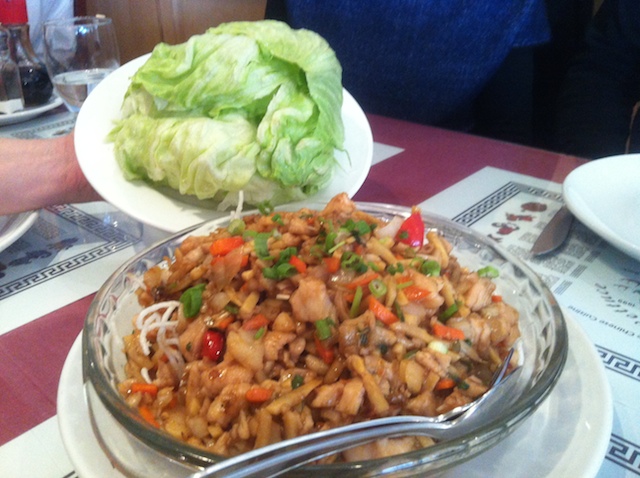 We ordered six main dishes, which came all at once like most Chinese restaurants. The Bombay style Garlic Prawns were a huge hit! The presentation was really colourful, which made it look appetizing right off the start, and the prawns themselves were juicy and tender with a good taste of garlic. It wasn’t as spicy as you’d think and was more Chinese than Indian, but still different than any Chinese style prawns you’ve eaten before. 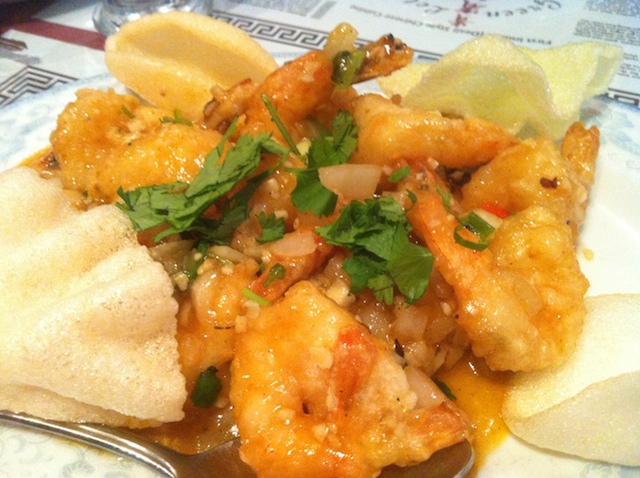 Next was the Buttered Chicken that came in a small bowl but packed a big taste. You’d think it would be a typical Indian dish but it was anything like you’ve eaten at one of them. The chicken was melt-in-your-mouth tender and cooked perfectly, the sauce was sweet but not spicy and the flavours were simple. 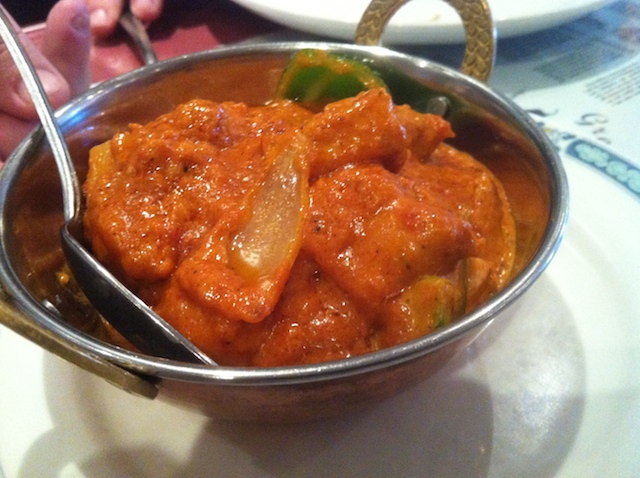 The Stir Fry Eggplant with Shrimp in Chili Sour Garlic Sauce was next – a really long title for a dish but it definitely describes what you’ve ordered! The beautiful purple colour of the eggplant made it visually appealing off the start and there was lots of shrimp in the dish to accent the taste of the eggplant. It was more representative of Chinese style cooking but, again, unlike a typical Chinese restaurant. 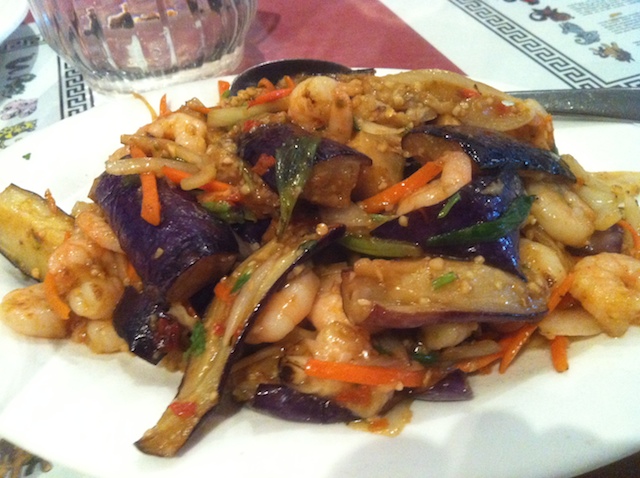 By now you can tell, Green Lettuce does a job with creating visually appealing dishes and the Spicy Chili Garlic Green Bean with Chicken didn’t fail. The surprise in this dish was the smokiness of the green beans, which were cooked perfectly and not too crispy. There was lots of chicken in the dish with just enough garlic flavouring. This one was thoroughly enjoyed. 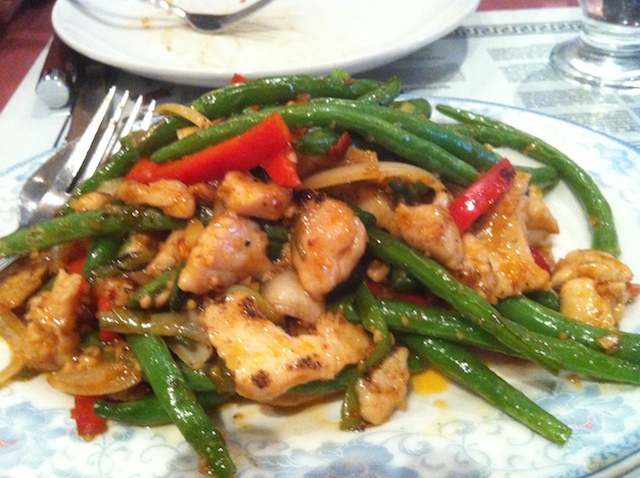 We just had to try the Masala Beef, which started out mild but finished off with a strong hit of spice and floral flavour. It was very bright red in colour, much like tandoori chicken. There was a strong curry flavour and it made this a really yummy dish. 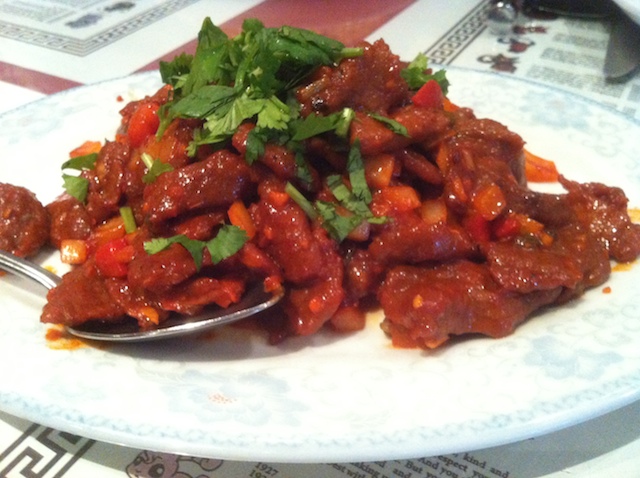 The last of the main dishes was the Masala Chicken Fried Rice – fried rice with a kick! It was a Chinese style dish with a spicy curry edge to it, which definitely turned made it Indian flavoured, and complemented the other Indian style Chinese dishes.

If you prefer milder flavours, you can order plain steamed rice. 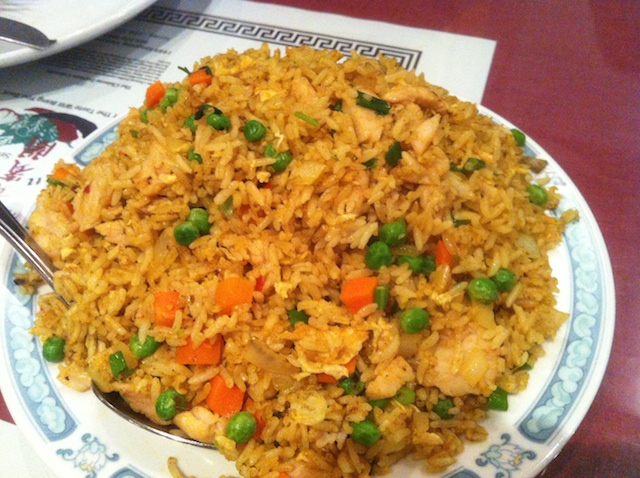 We didn’t have much room after all those fantastic dishes, but out of curiosity we just had to try the interesting Indian-inspired desserts. First up was the Kulfi Ice Cream. Unlike western ice creams, this is not whipped, which results in a solid, dense frozen dessert. The version they had was rosewater flavoured, which was nice and overly sweet. It was very refreshing and comes with a wafer for texture contrast. 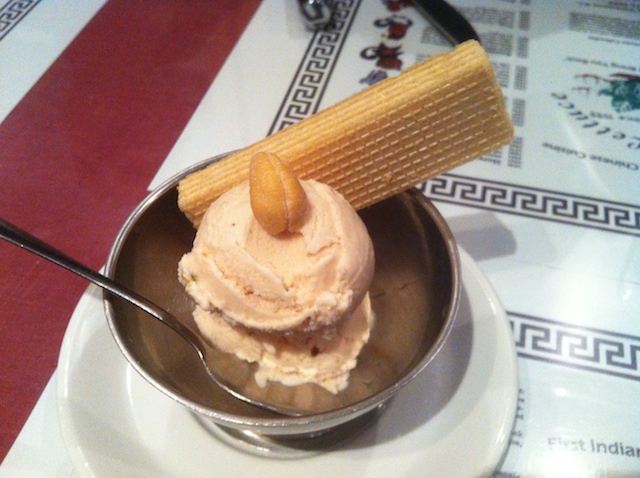 We also tried the Fried Banana with Honey Syrup and Vanilla Ice Cream. It was really creamy on the inside with a crispy exterior, and we all loved the taste and texture of the banana. It wasn’t greasy, which made it very enjoyable. 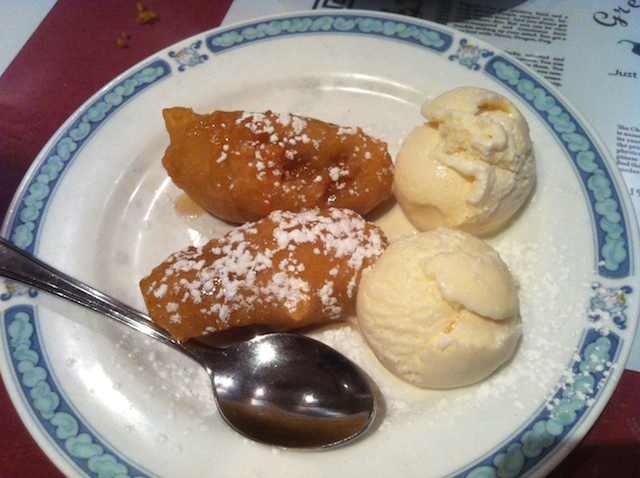 The last dessert we tried was the Fried Pineapple with Honey Syrup and Vanilla Ice Cream. This one was very similar to the Fried Banana, and it was delicious. It’s described as “deep fried french taste with pineapple on the inside” – that says it all, and it’s not as sweet as the banana dessert. 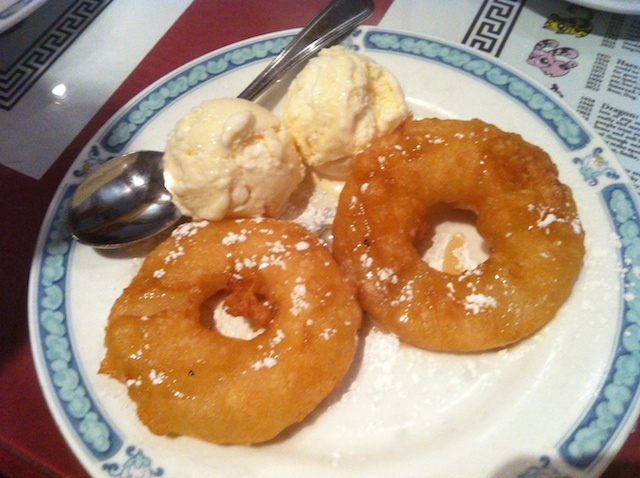 In addition to the fantastic food, there are a number of vegetarian and vegan choices. For the gluten free diners, they can prepare dishes upon your request. The dishes have a chili rating system of: one (mild), two (medium) and three (very spicy).

The menu is large and divided into sections: appetizers, soups, beef, chicken, lamb, fish, prawns, vegetables, tofu/paneer, noodles and dessert. Prices for main dishes range from $13 to $16 for a good portion size. They also serve beer, liquors, long drinks and wine and have non-alcoholic drinks too.

There’s free parking in the back of the restaurant.

You won’t find chopsticks nor teapots at Green Lettuce. It’s a casual ambience, but clean and tidy. The restaurant is always busy with people from all ethnicities, especially those of Indian and Chinese backgrounds. The food is diverse and you can find a number of choices that will appeal and surprise!

Green Lettuce Restaurant is definitely a great place to checkout!