Released by job search site Indeed, the list pulled together locations that have seen an increase in job seekers between two timeframes: April 2015-March 2016 and April 2016-March 2017.

Indeed found that communities like Alliston (which is an hour and a half north of Toronto), Dundas, and Innisfil surprisingly topped the list.

“Looking at Indeed’s own proprietary data, we can see where Canadians are searching for jobs and more specifically, where there’s been an increase in job seeker activity,” said Jodi Kasten, managing director at Indeed Canada in a press release. “What’s surprising about this list is that it’s dominated by smaller communities and Canada’s big cities are noticeably missing.”

Kasten said the drivers behind the job seeker activity uncovered vary, but the combination of opportunity, cost of living, economic and population growth may be attracting talent to these communities.

And with the current costs in rental and real estate, it is no surprise that job seekers are searching outside of the larger cities.

Other communities that made the list include Dawson Creek, BC, Strathmore, AB, and Saint-Jean-sur-Richelieu, QC. 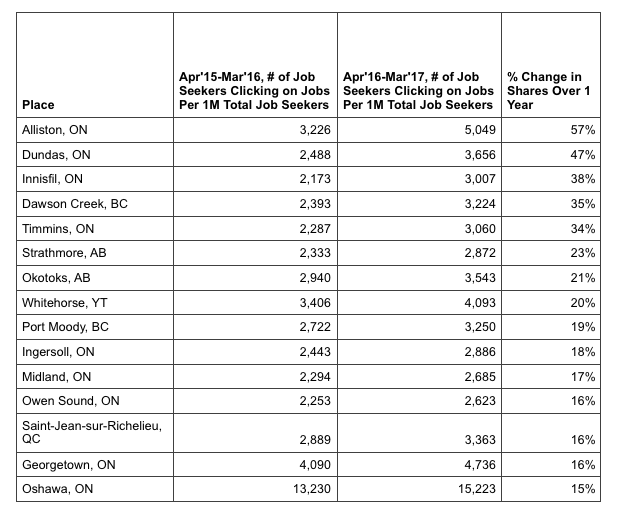