MPORTFEST, Canada’s Biggest & Baddest Car Show, returns to Vancouver for the first time since 2005 on June 8th, 2013 at The Rocky Mountaineer Station! Back by popular demand, Vancouver’s tuner market has been asking for a show of this caliber to return to the city.  With major sponsorships from across North America, IMPORTFEST will bring the best vehicles, products and lifestyle to the ever growing Vancouver modified vehicle market.

The show will feature some of Vancouver’s top modified vehicles.  From personal project cars to local tuner shops showcasing their work, this show is sure to impress and catch the attention of any car lover.  Vehicle owners will compete against each other in several different classes in hopes to be win trophies and cash prizes from IMPORTFEST, but most importantly, bragging rights.

IMPORTFEST Vancouver will also feature showcase vehicles from all over Canada & USA including displays from:

Attendees of IMPORTFEST will not only experience these exclusive vehicle displays, but will be thoroughly entertained with DJ Competitions, Scion “Ride & Drive”, racing simulator contests, and plenty of giveaways from vendors.  They will also get an opportunity to meet International Import Models Jeri Lee (Miss IMPORTFEST 2012), Amy Fay (Miss IMPORTFEST 2011) and Nikita Esco & renowned Babe Blvd Photographer Steve Bitanga. 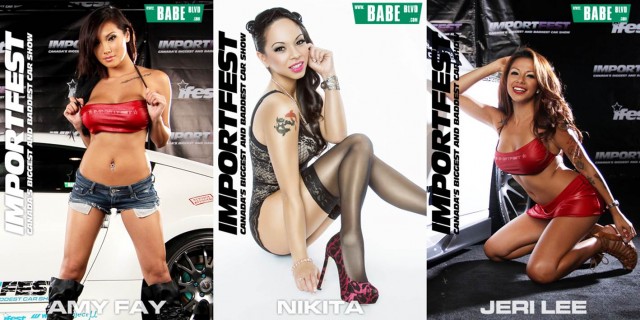 To enter you have to do the following: