What does this mean to the Canucks salary cap:

Estimates for next year show the Canucks with five or six roster spots left, with around a million to spend on each player. Barring anything crazy happening in the off-season, you’re looking at this roster for next year:

So you’re essentially looking at the core of this year’s team, except a year older.

The biggest victim in this is probably Shawn Matthias. Without a trade going down, it looks next to impossible for the Canucks to fit him in, unless Laurence Gilman can convince Matthias to play for $1,000,000 and a “really cool bike, with racing stripes”.

Matthias, for his part, has played very well this year. Advanced stats show Matthias to be far more valuable on the wing, rather than center, and has him pegged as being a one dimensional scorer. That is kind of like saying life is tough because you’re known as a one dimensional super attractive rich person.

While having a goal scoring bottom six winger is a pretty nice problem to have, it can be an expensive one. Look no further than Benoit Pouliot (4 million) and David Clarkson (5.25 million) to see how willing teams can be to over pay for a big guy who has scored 15+ goals in a season before. It’s as if the moment you find a guy who is taller than 6″ and he scores 15 goals, he becomes a Norse God in the eyes of NHL GMs.

“You should have seen him, Jim. He came out of the sky on a god damn cloud of lightning and scored three goals, I shit you not. A CLOUD JIM. A god damn cloud.”

It’s not hard to imagine a world in which Dave Nonis, in one last act of being a terrible GM, reaches out and throws a 4 + million contract at Matthias before Brendan Shanahan gives him the Stone Cold Stunner out of town. Matthias might never have fit into the teams future if the UFA market rears its ugly head as it has been known to do.

Another player who might feel the cap crunch in this is Yannick Weber. Weber was signed initially to be a power play threat, due to his hard shot. Well, almost two years later and the Canucks finally decided to give it a try, and lo and behold, it’s garnered results.

Weber leads the Canucks back end in goals (nine) and has looked for more threatening on the point than the vaunted muffin shooting duo of Tanev and Hamhuis (god bless these two for their defensive play, but offensively they are a nightmare).

Will the Canucks find enough money for Weber? Will Weber price himself out of the Canucks plans? We shall have to wait and see.

So while the cap hits of Sbisa and Dorsett seem high relative to the type of players they are, the Canucks aren’t necessarily in “cap hell” next year. If the cap stops going up at any point down the line, maybe you start to worry about fitting in a new Bonino deal, or trying to re-sign Radim Vrbata, but for next year, the Canucks will take a minor hit on their depth.

Plus, this is a world where Luongo and Clarkson got traded. Anytime someone claims a player is untradeable, the dude gets traded just to spite people. Sbisa’s contract is most likely not the anchor its being made out to be, should the team need to try and get away from it.

And again, all of this is without any possible trades the Canucks may or may not make to clear room. I will wait while all of us in the room look at Ryan Miller’s contract and cough uncomfortably.

What does this mean for the young guys in the organization:

Frankie Corrado, Hunter Shinkaruk, Adam Clendening, Brendan Gaunce, come on down! You’re the next contestants on the Price is Right!

Canucks fans have wanted young guys to get their shot, well guess what, cap crunch mode makes that a very real possibility!

The next pre-season should be a fun one, because if nothing changes, several of the young guys should have a great shot at making the team. Corrado especially could be relied upon as a guy who comes up and takes over that 6th spot, as he has been dancing on the NHL bubble for several years now. Adam Clendening is oozing puck moving potential, so he is another guy to keep an eye out on. Ryan Stanton also exists.

The major issue, defensively, is there is no bright light at the end of the offensive tunnel for the Canucks. If the Canucks lose Weber, they effectively have no scary threats from the point, unless Hamhuis puts on a mask and makes scary noises when he shoots directly into people’s shin pads.

What does this mean for Jim Benning:

Jim Benning has bounced between moves that seem astute and in line with the new advanced stats world (Radim Vrbata, Sven Baertschi, re-signing Chris Tanev), and ones that feel very old school, or like “meat and potatoes” type moves (Sbisa and Dorsett re-signing, Ryan Miller signing). One only has to look at Benning’s comments on Sbisa to see that meat and potato thought process:

Benning on Sbisa: "He plays his best in those heavy games (against ANH, LA, SJ). He’s a guy that can separate fwds from the puck." #Canucks

His use of “heavy games” and “old kind of throwback” speak of an era where Derian Hatcher was a viable player despite his inability to skate fast.

That being said, it will be interesting to see which side of Jim Benning we see over the next couple of years. More of the meat and potatoes guy, or more of the kale and quinoa new era guy.

Either way, I am excited about calling him Two-Face Benning if this trend continues.

What does this mean for the fans:

These are but of a few of the things seen when the Sbisa contract was announced.

Any pretense that Jim Benning is good at evaluating talent flew out the window today with the absurd extension of Luca Sbisa. #Canucks #NHL

3.5M AAV is a lot to pay for luca sbisa, a defenseman best defined by the phrase "well, he's listed as a defenseman"

In what GODWAFUL world is Luca Sbisa more valuable than Chris Tanev?

Sbisa has some supporters, mind you. The hope is that he’s still young, he has all the tools (he just needs to learn to use them instead of flinging them at his own team’s head), and a lot of d-men seem to hit their stride in their mid 20’s.

His supporters are few and far between, though. Dislike of Luca Sbisa has generally been a unifying experience for Canucks Nation.

Advanced stats in particular dislike Luca Sbisa. It feels like any day now they will invent a new stat just to underscore how terrible they feel Luca is at hockey. Luca has firmly been in the cross hairs of advanced stats guru Rhys Jessop over at Canucks Army most of the year.

Rhys’ argument is based around comparing Sbisa to the careers of other like-minded defenceman, and it doesn’t paint a very optimistic outlook for a high end career for one Mr. Sbisa.

Unfortunately for Sbisa, the eye test hasn’t been pretty for him either. His first month with the team was highlighted by bad turnovers, terrible reads, and awful pinches. Not the fun pinches you give your girlfriend, but the kind of pinches that led to many odd man rushes against the team.

Sbisa also joined the team under the shadow of the Ryan Kesler trade. Had he been a random off season pick up, perhaps his first month could have been swept under the rug. Alas, that was not the case, as Canucks Nation had their spotlights set firmly on Sbisa and Bonino to try and assess the fallout from the Kesler trade.

As a result, Sbisa has a long hill to climb to try and escape the perception of being a gritty 2015 re-boot of Dana Murzyn. Luckily he now has three years to do so, but perhaps he should stay away from Twitter while doing so. 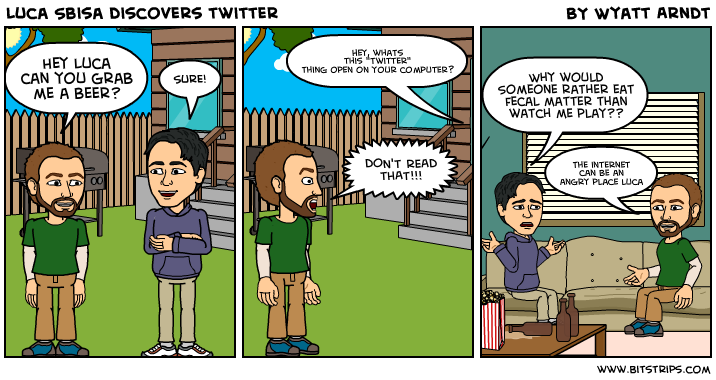 As for Derek Dorsett, most people enjoy him as a player. I think most people agree his contract is high (his agent described negotiations as being really easy, which I assume happens when Jim Benning walks into the room and just starts making it rain dollar bills), but it’s not the end of the world. Dorsett firmly falls into the divide between advanced stats vs intangibles, so if anything, he should provide fun fodder for online arguments for years to come.

“You can’t measure what he brings to the room!”

What does this mean to the Canucks:

These two players are another Jim Benning stamp on the team. At worst, they are overpaid and will limit the Canucks ability to add better players to the team. At best the Canucks win the Cup and we can pretend it was all because of Luca Sbisa.

It’s impossible to judge the future, but the overwhelming response to the deals has been negative. It will be really interesting to watch how these deals play out, and to see the cities response to Benning next year after the honeymoon is over. Will Sbisa turn things around? Will fans throw these deals in Benning’s face for years to come??

How can you not love sports??