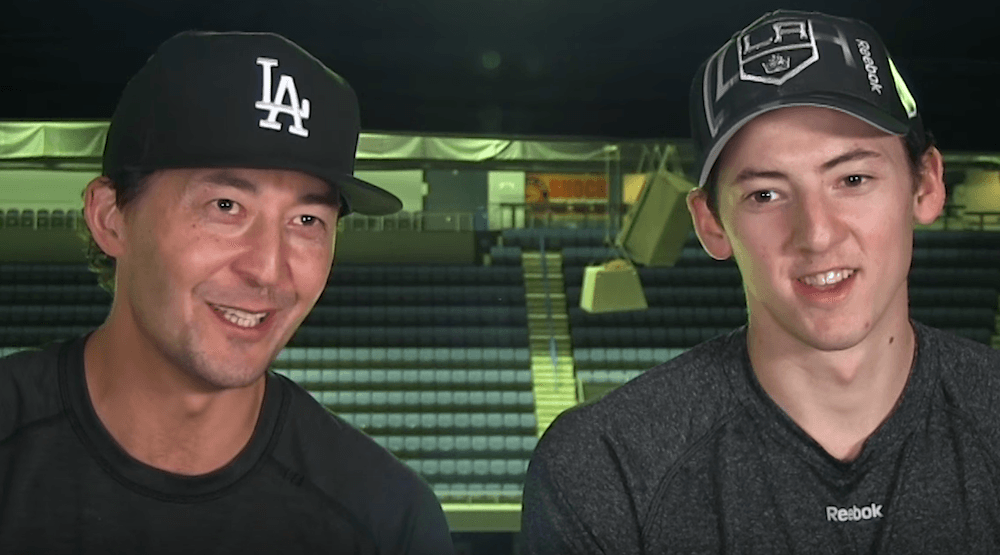 Four days after UBC’s Matt Hewitt got to live the dream for a day with the Vancouver Canucks, there’s another special emergency back-up story happening in Southern California tonight.

The Vancouver Canucks are in Los Angeles to play the Kings, who are without the services of their number one goalie, Jonathan Quick. They’re now without their #2 goaltender, as Jeff Zatkoff injured his groin at practice this morning.

The Kings’ AHL affiliate is in nearby Ontario, California, so this isn’t another Matt Hewitt story. Well, not for the Kings anyway.

That’s where this story gets interesting.

The Ontario Reign are without their two regular goaltenders, with Peter Budaj and Jack Campbell up with the Kings. Jonah Imoo, a 22-year-old goalie from Surrey in the Kings’ system, will make his first AHL start for the Reign this evening.

But it’s slim pickings for the Kings otherwise, who don’t have another available goalie in their system to back-up Jonah.

Enter Dusty Imoo, the Kings’ goaltender development coach, who will back-up tonight for the Reign.

Dusty is 46-years-old and hasn’t played professional hockey since he retired from the Asia Ice Hockey League in 2006.

If the Imoo name sounds familiar, you may recognize it because of Clay Imoo, a sports writer with Daily Hive.

I'm slipping further down the "Most Popular Imoo" list and I'm totally fine with it. Likely at number 9 or so now….right behind my kids.

Clay reached out to his first cousin Dusty this afternoon.

“I almost said no as I didn’t want to put any added pressure on Jonah,” said Dusty. “He’s already going to be nervous enough and he doesn’t need his old man backing him up. But this is indeed a once-in-a-lifetime opportunity.”

“My biggest focus today is to put Jonah in the best position to succeed. I told Jonah to turn his phone off so not to be distracted. This is a huge opportunity for him. I’m more nervous and excited for him than I am for myself.”

This is a proud night for the Imoo family, and there aren’t many people happier tonight than our own Clay Imoo.

“I’m very proud of both Jonah and Dusty,” Clay said. “I’ve been following their careers for all of my life, and for them to experience this together is pretty amazing.”