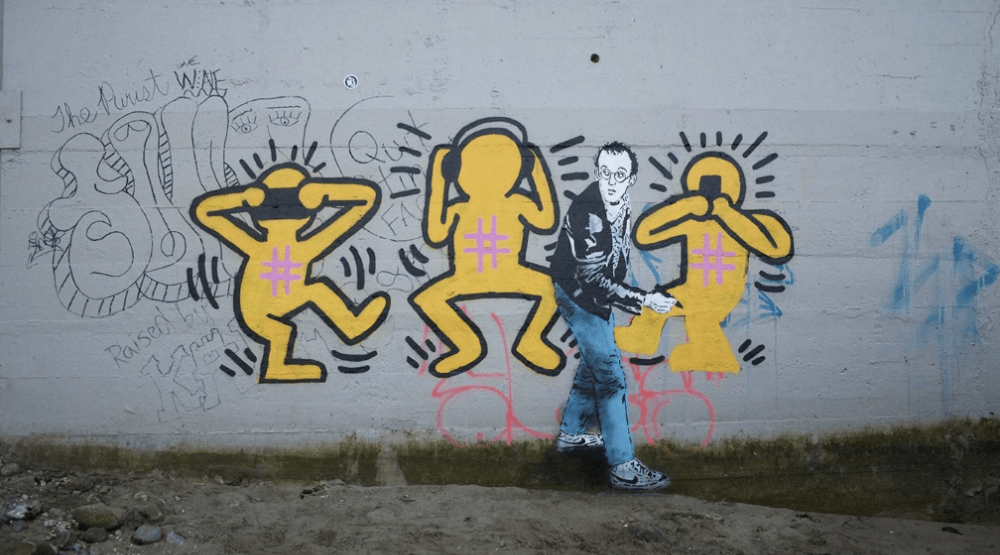 Born somewhere in western Canada, sometime in the late ’80s, Vancouver artist iHeart has surprised more than one passerby with his stencil work hidden around the city. Given the nature of what he does, iHeart remains anonymous and claims he is “just a boy with ideas, opinions and a whole lot of aerosol.” iHeart’s social commentary plays with the viewers interpretation based on wether the work is seen online or in person.

He is part of the upcoming Art Rapture urban – pop exhibition featuring more than 15 critically acclaimed artists presenting their most provocative work yet. The show, taking place on October 1, will be a curated experience in the heart of Mount Pleasant and iHeart will be presenting some new work. You might not see him, but he will be there too.

Here’s an interview about his latest work, Vancouver’s creative scene, and what you can expect to see from him next.

People that don’t know much about street art see your work and think it’s a Banksy or an imitation of it because not only is he the most known name out there, but your work also has social commentary. How do you respond to that and differentiate from him?

I feel like the comparison is inevitable. Banksy is probably the most popular artist of this generation and has gone from a counter-culture icon to a pop-culture icon. I feel like any street art with social commentary, regardless of style, is usually labeled as Banksy. We’re similar in a lot of ways but I like to highlight the differences: he’s probably rich, while I have bone-crushing student loan debt. He’s an internationally renowned artist that builds amusement parks, does a month-long residency in New York, and sneaks into Gaza to paint cats. While, I am just an artist.

As a Vancouver-based artist, how do you feel about the challenges of using public spaces and walls to share your work in the city?

Based on the reactions to the unsanctioned work that I have been putting up for the past few years you could see that Vancouverites were embracing the art and wanted to see more of it. The Vancouver Mural Festival, which just wrapped up, was an enormous success and has flattened a lot of the challenges around public art in the city. 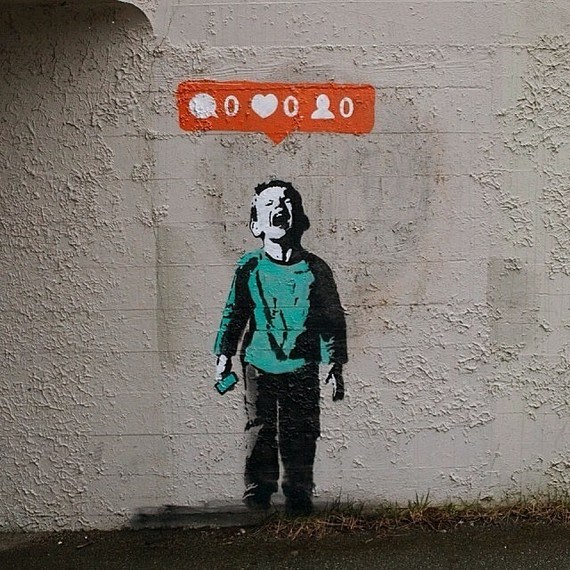 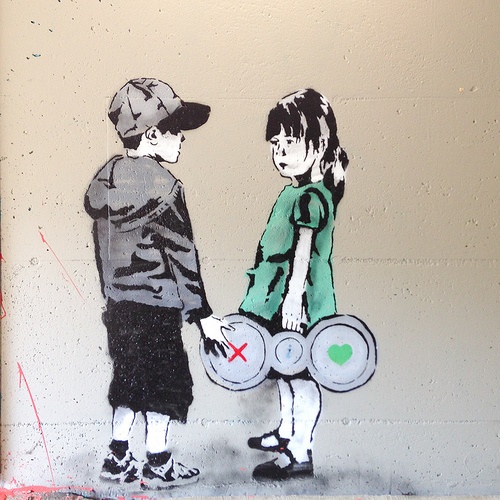 How do you see Vancouver’s creative scene?

Vancouver’s creative scene is world-class, but the scene itself doesn’t get much recognition. I think that’s changing.

With the Vancouver Mural Festival wrapping up and all the new public art decorating our walls, do you see a future for Vancouver to become a creative urban hub, much like Berlin or Buenos Aires?

The festival was such a success in its first year that hopefully we can keep that momentum going and get more sponsors and funding and, therefore, more walls and more artists involved. It’s really just the jumping-off point and I’m really excited to see where it’s heading. 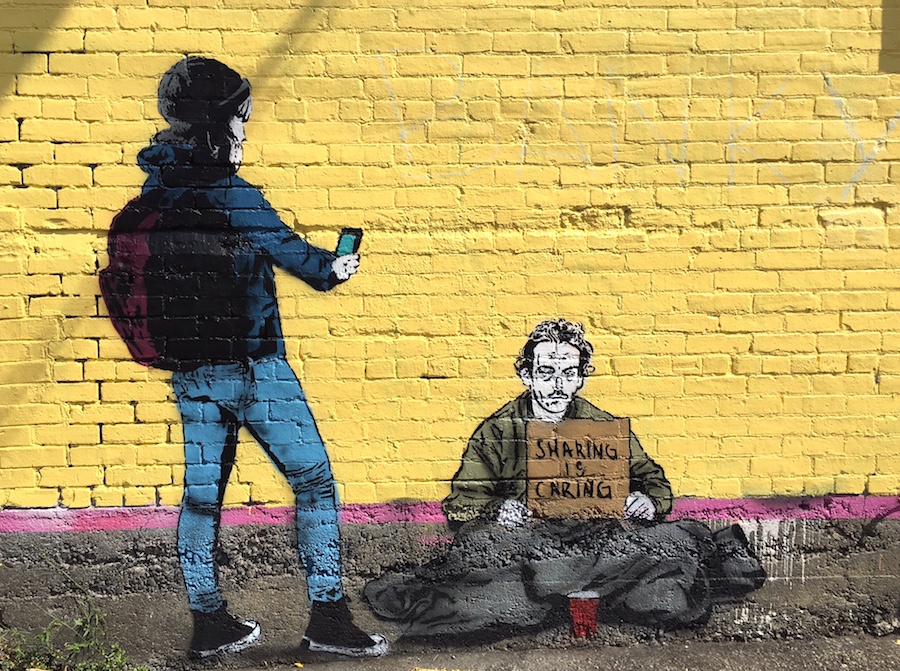 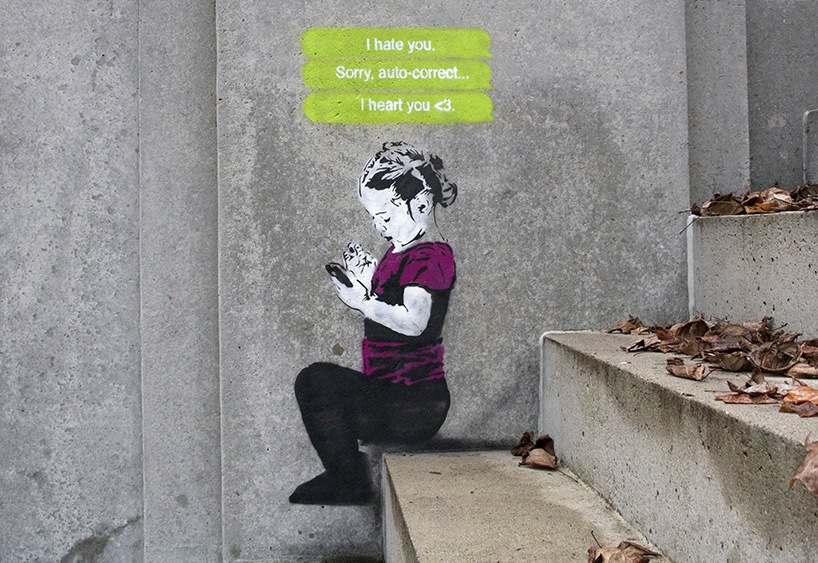 Which cities that you’ve worked in do you find most exciting for creatives and street artists?

I’ve painted in New York, Chicago, Seattle, Portland, and San Francisco and I think SF has given artists a lot of legal street art and graffiti outlets. There are legal wheat pasting walls and it’s legal to spray paint the sidewalks.

You’ve done some awesome collabs with different artists and we have one here in Vancouver you created with Ola Volo for the VMF. What are some of your favorites that you’ve done so far and what is one you would really love to do?

The collab with Ola is my favourite that I’ve done so far. It had been in the works for probably a year, so it was nice to see it come to fruition. Other than that, I’ve collaborated with The Grominator on a few occasions and they’ve had a lot of positive feedback and relieve a bit of tension between street artists and graffiti artists. I would like to do a few more collaborations with Calgary artist Earthfolk but other than that I haven’t given it too much thought. 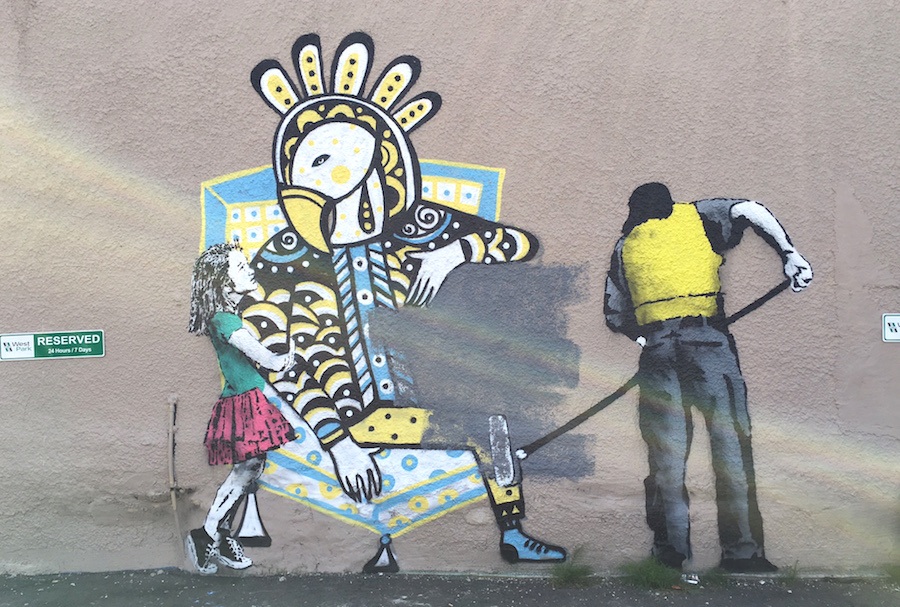 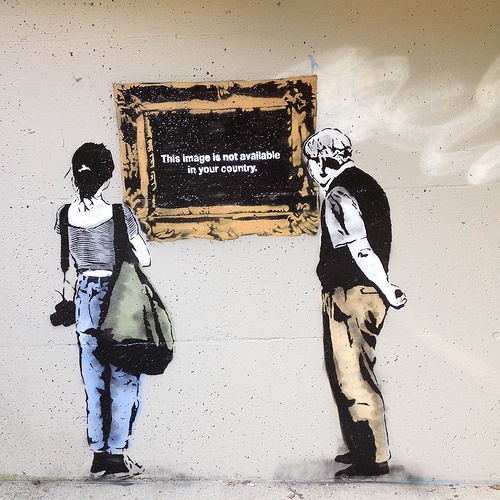 Art Rapture, the upcoming art show presenting a mix of urban, pop, and provocative artists, is featuring your work in a more private setting. Have you done private shows before and what can attendees expect to see during this show from you?

I have done a handful of shows like this. After seeing the artist roster I’m thrilled to be part of Art Rapture. Rest assured there will be some more collaborative work with Ola and several new works from yours truly.

To see the full line-up of artists and to secure your tickets, visit Art Rapture’s event page. This is an event you can’t miss!

Daily Hive is a proud media sponsor of Art Rapture.