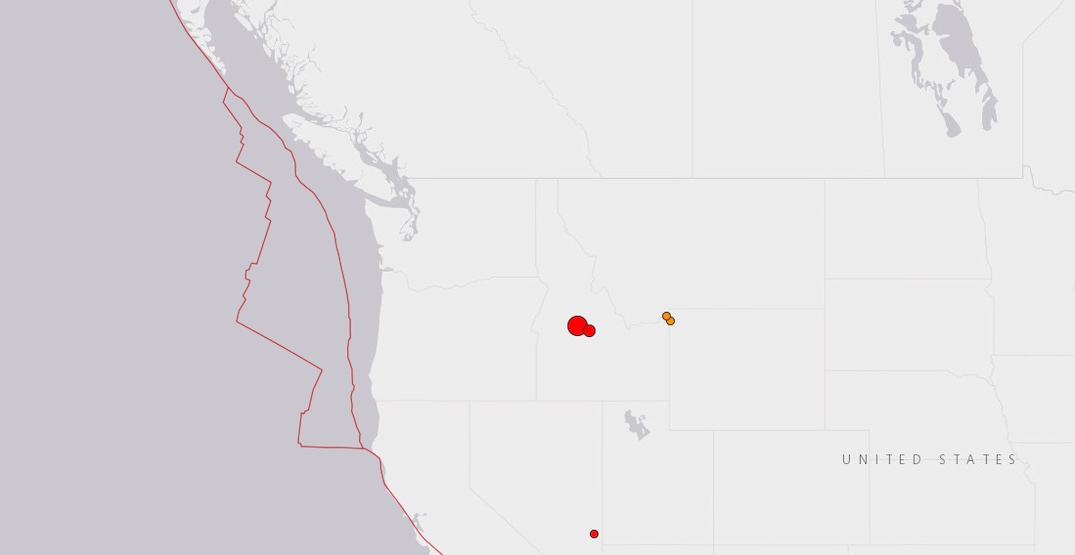 An exceptionally strong earthquake hit Idaho this afternoon, according to the US Geological Survey.

The magnitude 6.5 earthquake struck at 5:52 pm local time (4:52 pm PT) with an epicentre about 126 km northeast of the state capital city of Boise, near Boise National Park and Yellowstone National Park.

It had an exceptionally shallow depth of only 10 km, which contributed significantly to its force felt widely across much of western North America.

There are numerous reports on social media of people feeling the strength of this earthquake well outside of Idaho, with reports stretching as far as Salt Lake City, Portland, and Seattle, and even in Canada — in Kelowna in British Columbia, and Calgary in Alberta, about 1,000 kms away.

Incredible to believe but we noted the lights sway slightly in the EOC. #YYC #Earthquake pic.twitter.com/uaTsSpHWTd

Tom Sampson, the chief of the City of Calgary’s Emergency Management Agency, tweeted that the lights swayed inside the city’s emergency operations centre. Several videos have also emerged of chandeliers swaying in Kelowna.

There are no immediate reports of damage at this time.

This follows the potent magnitude 5.7 earthquake that hit the Salt Lake City region on March 18. The shallow depth of 11.7 km damaged over a hundred historic buildings, caused tens of thousands of power outages, and forced a temporary closure of Salt Lake City International Airport, forcing the diversion of dozens of flights.

This, of course, comes as states of emergencies are declared across much of North America, with physical distancing and self-isolation being practiced to slow down the spread of COVID-19.

Here are some reactions in response to today’s Idaho earthquake:

Felt the earthquake from Idaho in Kelowna, BC! #earthquake pic.twitter.com/PukmQVi60A

There was just a pretty good earthquake here in Kelowna…. pic.twitter.com/v1c43m5ZK7

My sister in #kelowna reports an #earthquake at 5 pm today pic.twitter.com/OSUdycB3Cu

Wow I never felt an earthquake in Calgary before but I certainly felt that one! Everything shook – including me!

@KTVB My friend in Seattle working in Pioneer Square felt the earthquake here. We just felt the aftershock 36th & State.

Felt the Idaho #earthquake in Beaverton Oregon at about 5pm pic.twitter.com/w9tZ8jyS2z

Did we just have an #earthquake? … video from my neighbour

Update: There was a 6.5 in Idaho pic.twitter.com/xwWGmN7pKC

Am I dumb like I thought Idaho for sure doesn’t get earthquakes…at least not ones you can actually feel yet alone shake your entire house pic.twitter.com/zCQn6uGozQ

Felt the #Idaho #Earthquake in Clayton, WA. That was fun! pic.twitter.com/YQTuEBUA6F

If you look closely, the 6.5M Idaho #earthquake lasted about 15 or so seconds. Felt all the way to BC Canada and SLC. #idwx pic.twitter.com/DLHRbR8jq7

Felt it in Pocatello…like our building was rocking back & forth #earthquake #idaho pic.twitter.com/D1bbmYByjC