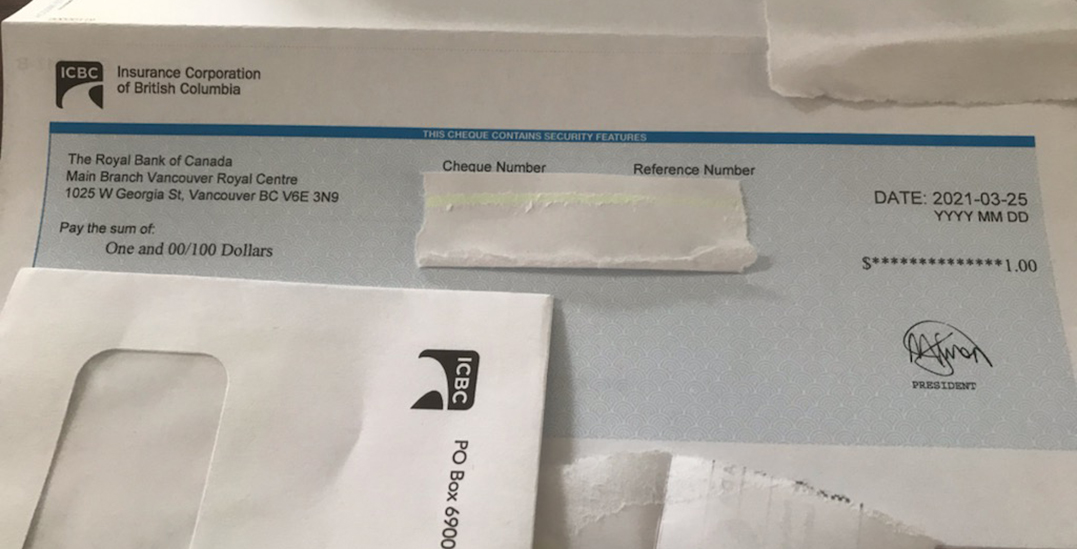 A woman in the Tri-Cities area recently shared a photo of her ICBC rebate cheque that paid far from what she expected.

Earlier this week, Shari O’Neill posted on Twitter when her cheque came in the mail — she received $1 back from the Crown corporation.

WOW!! What a colossal waste of money! It literally cost more to send out this rebate from @icbc than the amt it was for. No wonder they are in the hole. $1.00, what should I spend it on? #Stupidity pic.twitter.com/YS38ipxyev

“What a colossal waste of money!” she tweeted. “It literally cost more to send out this rebate from ICBC than the amount it was for.”

O’Neill tells Daily Hive that while she was “thinking there’d be a bigger cheque in the mail,” she also wasn’t surprised to receive such a meager amount.

“In all honesty, I didn’t expect to be overjoyed about anything because it’s ICBC,” she says in an interview. “I saw the cheque, I was like ‘oh my gosh that’s ridiculous’ — but at the same time I wasn’t surprised.”

O’Neill says that her family has two vehicles and both she and her husband work in the film industry. In addition to their daily commute and running errands, they’re also taking the kids to and from school.

Their driving took a major pause when the pandemic began last March, however, and the film industry was shut down until mid-August.

“There was no to-and-from work for either one of us for five months,” she explains. “And that’s the period that the rebate covers.”

O’Neill adds that she’s been driving since she was 16 and has been an insured driver ever since.

“I put a lot of miles on the vehicle and so does he. I have two insured vehicles and I pay a lot for them.”

ICBC responded directly to O’Neill’s tweet, saying that they’re “committed to ensuring customers receive all the savings owed to them.”

“We will be issuing refund cheques for any amount of $1 or more.”

We’re committed to ensuring customers receive all the savings owed to them. As part of this commitment, we will be issuing refund cheques for any amount of $1 or more. This approach is a change from our historical practice of not issuing cheques for $5 or less. ^kr

When the Crown corporation announced the initiative in February, they said that the average payout would be $190. Drivers that had a policy between April 1 and September 30, 2020, would benefit from the payment. Those that cancelled their policy during the height of the pandemic would receive a partial refund.

Ministry of Public Safety and Solicitor General Mike Farnworth said that 80% of recipients would receive between $50 to $300.

O’Neill says that she shared the photo of her rebate cheque on social media to highlight “how ridiculous it is to send a $1 cheque.”

“Maybe they’ve messed up on my refund,” she explains. “I’m going to go online and do the calculation and if something different comes up, I’m going to give them a call.”

“Of course people are gonna be happy when they get the bigger cheques. And I’m happy for them — some people need that money right now.”