The remnants of a powerful Pacific hurricane are expected to directly hit British Columbia and southeastern Alaska on Tuesday evening, bringing heavy rainfall and high winds to much of the West Coast.

According to the National Oceanic and Atmospheric Administration’s (NOAA) Central Pacific Hurricane Center, Hurricane Ignacio was downgraded to a subtropical storm on Friday after it made a surprising turn northeast. It will become an extratropical system by the time it reaches B.C.

Such storm systems feed on warm waters for their strength, so as the remnants move further north into cold waters it will grow much weaker by the time it arrives.

The system is being driven into North America by a fast moving jet stream that has been pushed north by a large high pressure area in the middle of the Pacific.

The latest forecast models by Environment Canada and NOAA indicate the extratropical storm system’s direct influence will miss B.C.’s major population centres, the southern areas of Vancouver Island and the Lower Mainland, but this could change.

At its peak, Ignacio was a Category 4 hurricane with winds of 230 km/h, and as of this morning it still produced winds in excess of 100 km/h, NOAA data indicates. The storm was among three Category 4 hurricanes recorded in the Central and and Eastern Pacific Ocean, marking the first time in recorded history that there has been such an instance.

Much of the Pacific Ocean’s waters are unusually warm this year due to the strong El Niño phenomenon, creating the conditions that enable more tropical storms to form. 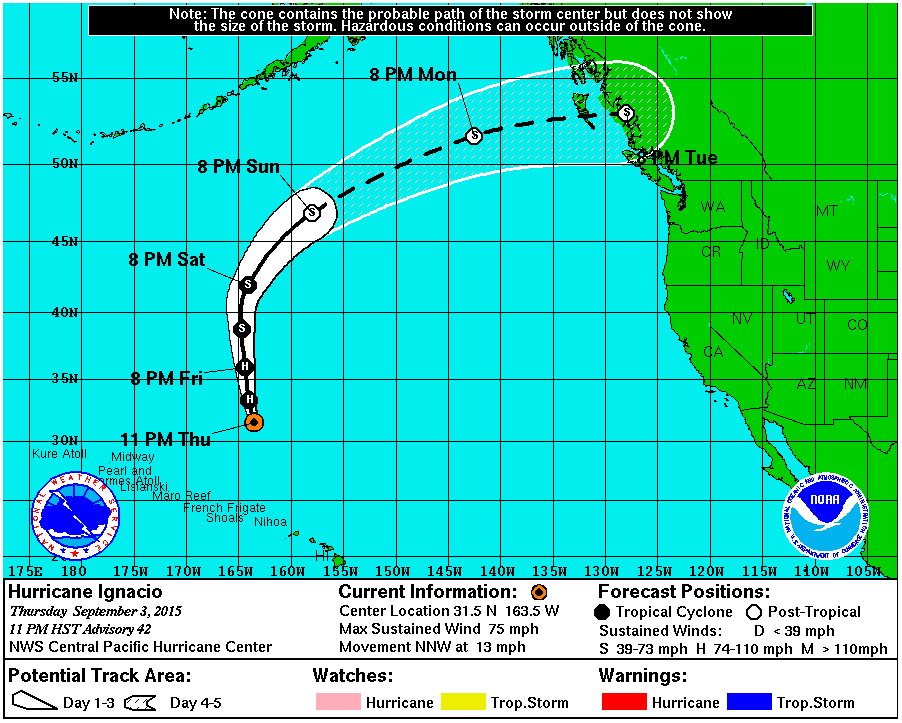 In the Central Pacific, Hurricane Ignacio has winds of 75mph with a pressure of 980mbars. Movement is NNW at 12mph. pic.twitter.com/vI13ZjOLRW — Johnny Parker (@JohnnyParker012) September 4, 2015