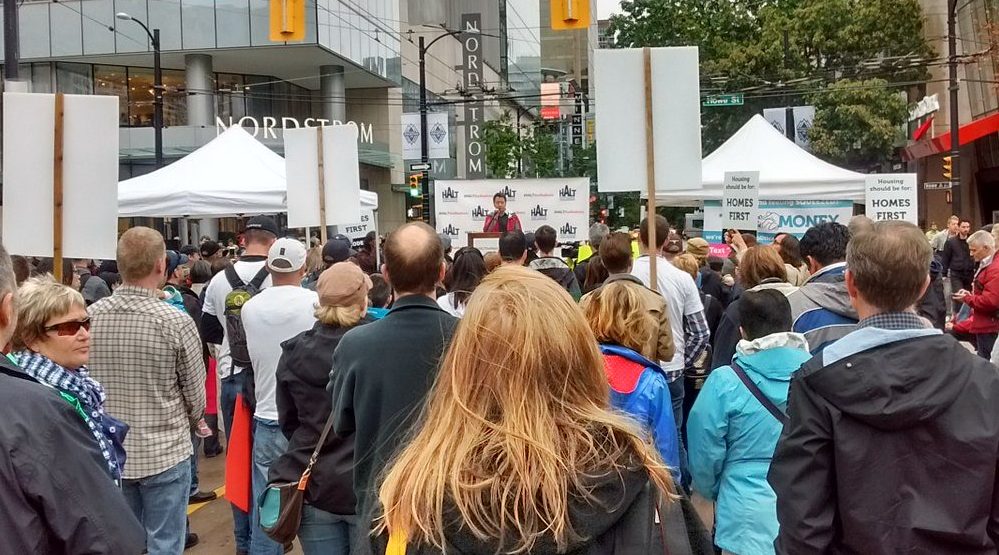 The rain did nothing to dampen protesters’ spirits on Saturday as hundreds of people took to the streets outside Vancouver Art Gallery for a rally aimed at the city’s housing crisis.

Vancouver, you didn't disappoint! Thank you to you ALL for your support of #HALTtheMadness! You're all rock stars!

The Housing Action for Local Taxpayers (HALT) hosted the #HALTTheMadness rally on Saturday, September 17, at Robson Square in order to address and protest the current housing crisis in Metro Vancouver.

HALT is a non-partisan community action group that is demanding all levels of the Canadian government address the high housing prices in the Metro Vancouver area.

“We are in the midst of a housing crisis in Metro Vancouver,” said HALT spokesperson Justin Fung, in a release prior to the event. “Our elected leaders at all level of government and their agencies have been idle for too long. We need action NOW.”

Estimates suggest that up to 500 people attended the event, many of whom came wielding placards protesting Vancouver’s real estate crisis.

The event was also attended by David Eby, MLA for Vancouver Point Grey, who last week raised questions about Vancouver real estate after uncovering information that nine students own property here worth $57.1 million.

David Eby at the Housing Rally to #HALTtheMADNESS.