Feel the need to express your outrage about Vancouver’s pricey housing market?

The Housing Action for Local Taxpayers (HALT) is hosting the #HALTTheMadness rally on Saturday, September 17, at Robson Square in order to address and protest the current housing crisis in Metro Vancouver.

HALT is a non-partisan community action group that is demanding all levels of the Canadian government to address the high housing prices in the Metro-Vancouver area.

HALT has launched a petition demanding that the BC government act on foreign capital and party funding corporations. They have also released a six-point plan, which they believe will curb the housing crisis. 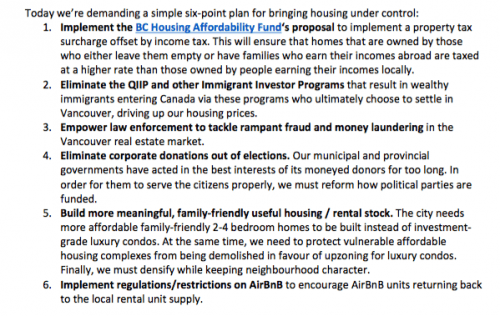 “We are in the midst of a housing crisis in Metro Vancouver,” said HALT spokesperson Justin Fung, in a release.

“We are demanding fairness for people who are living and working here, and who are contributing to their communities and contributing local income taxes. Our elected leaders at all level of government and their agencies have been idle for too long. We need action NOW.”

Saturday’s event will include appearances by several speakers and housing experts, including:

Where: Robson Square (south side of Vancouver Art Gallery)