If you’ve never shared a ‘humblebrag’ on social media, there’s a pretty good chance you’re either lying or just don’t realize when you’re doing it. According to the latest statistics from Virgin Mobile and Vision Critical, just about half of us admit to humblebragging every so often.

If you’re unaware of the term, Oxford Dictionary – the popular online dictionary of slang words and phrases – defines a ‘humblebrag’ as “Subtly letting others now about how fantastic your life is while undercutting it with a bit of self-effacing humor or “woe is me” gloss.”

Virgin Mobile teamed up with Jessi Cruickshank, L.A. host of Etalk on CTV and host of CBC’s Canada’s Smartest Person, to survey more than 1,000 Canadians to discover the art of false modesty and humblebragging habits across the country. 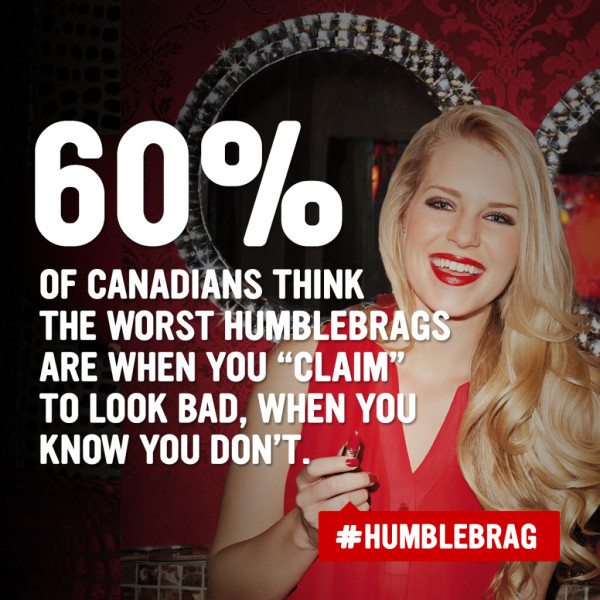 Oh dear. Don’t know what to do at the airport. Huge crowd, but I’ll miss my plane if I stop and do photos … oh dear don’t want to disappoint

What are we humblebragging about? The results showed most humblebrags are over someone’s appearance, followed by materialistic items and geographical locations. Almost 60 per cent of those surveyed say the worst humblebrags are when people claim to look bad when they clearly don’t.

Jessi Cruickshank, a Vancouverite and one of the most recognized stars in Canada who’s currently host of CBC’s primetime hit Canada’s Smartest Person and L.A. host of Etalk on CTV, believes that tooting your own horn doesn’t have to end badly:

“Personally, I love a good humblebrag popping up on my feed now and again, but according to [the study], 61% of Canadians are over it. They would rather you just straight-up brag, Kimye style, than try to coat your boast in false modesty.”

Why can't I look cool when I meet @TomHanks & he hands me his Emmy? Instead I get so excited & look like a goober: http://t.co/SW5prwnE

Kanye & I are not having marriage problems. Were literally obsessed with each other!

According to Cruickshank, avoiding the humblebrag is a lot easier than we might assume:

“My first rule of thumb is to add humour- it diffuses anything. Ellen Degeneres and Lena Dunham are masters of the funny humblebrag and who doesn’t love them?! Next, don’t mistake pride for bragging. Being proud of your accomplishment (A promotion! An engagement!) isn’t the same as rubbing it into everyone’s feeds. Which brings me to my last tip; don’t go overboard. A few boasts a year is tolerable, a few boasts a day is unfollow-able.”

Worried about being labelled a bragger or humblebragger? Let Virgin Mobile share your awesome accomplishments for you. Send something you’re proud of, but don’t want to brag or humblebrag, to Virgin Mobile Canada’s Facebook, Twitter and Instagram, and they’ll post it on your behalf. 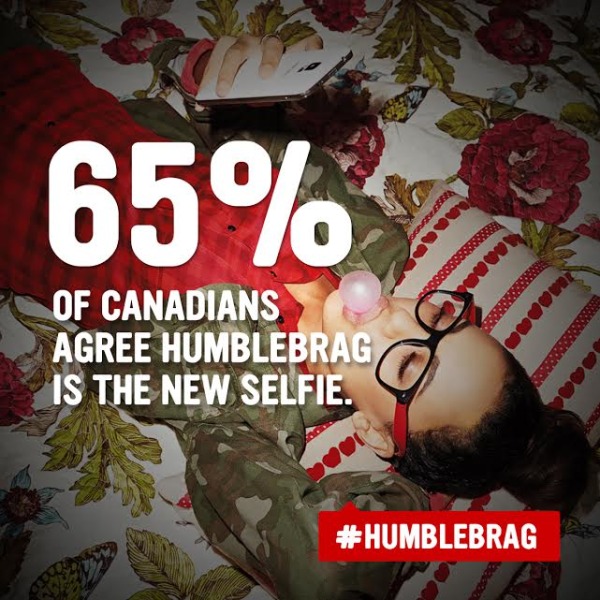