The duo, Robbie Slade and Peter Ricq, are funny guys who always get dance floors shaking. From their early beginnings in 2009, the Canadian funk beat-makers have created a name for themselves in the local indie-electronic scene. Since then, HUMANS has seen huge success across Canada, and south of the border. Just this year, Slade and Ricq played Toronto’s Bestival, San Diego’s CRSSD, and here in Vancouver, the boys played the Mad Decent Block Party.

But besides the tours and festivals, HUMANS released their debut LP, Noontide, in February via Hybridity Music, one of Canada’s leading indie electronic labels. The Muppets filled video for their single Tell Me premiered on Billboard, and the track has been remixed by several musicians including their local pals WMNSTUDIES & Waspy.

Having been on the road on and off all summer, HUMANS are back on home turf and are getting ready to play their first show in Vancouver since March. This time around, Slade and Ricq are combining their talent in arts and music, and bringing the “Das Experiment” Art Show to Fortune the night of their gig. Besides Slade and Ricq’s works, the show will feature artists Bob Masse, Peter Taylor, Colin Moore, Ben Knight, Malcolm Levy and Christian Whiticar. Sharing the stage on the main level will be Ryan Wells, Kalibo, Radio Zero DJs, and LeChance.

In anticipation for the big night, we caught up with the handsome, hilarious duo last week, and found out how you can become friends with HUMANS themselves.

Being locals, how did you guys meet?

How do you meet in an art show?

Robbie: Pete was showing at the art show, and I was a fan boy looking to get some art. I saw all these paintings on the wall, one of them was of a robot having sexual intercourse with a human female- and I knew I was onto a hot lead. So I went and found the artist who was painting these grotesque pictures and it was Peter, and we just hit it off.

So how has Vancouver shaped/inspired you guys?

Peter: I love this place. I’m from Montreal. I like Montreal but I don’t want to go back. Vancouver feels like home. We’re surrounded by good talented guys who are younger and better, so we just gotta keep up with those fellas.

You guys are also friends with a lot of other local artists. What do you think makes Vancouver’s music scene such a tight community?

Robbie: How hard it is to do shows here has probably contributed to the bond that bands have who might be competitors otherwise. People have to work together to really practice your art here. It’s so hard to find venues, you have to collaborate with people.

Being on tour most of the summer/year, you’re now returning for a home show. But the gig is not just a show, there’s an art element to it, tell us more about the collaborations.

Peter: Yeh, it’s our first show with our new visuals by Tangible Interactive. We haven’t had it for that long. On Halloween, we played in Tofino and Robbie had this great idea of bringing people inside “the blob” is what we call it, and ripped it. We’re getting it fixed, and I think we’re not going to do that anymore. Unless you’re really really really nice, and you draw pictures of dicks, then I might reconsider it. (laughs)

Wait, what just happened? Why do you want people to draw that?

Peter: That’s how you meet good artists, right? That’s how Robbie met me. If you draw pictures of dicks, you’re obviously someone I want to hang out with.

Going back to the art element and the instillation…

Peter: (laughs) So we control this blob, this big light visual that’s 12 ft. wide and 9 ft. tall. We do it on stage, and the reason we have a laptop now is to control that. So any haters out there giving us sh*t because we have a laptop, it’s strictly for the big giant blob behind us. There’s also a “Das Experiment” Art Show which will be downstairs at Fortune, and we have a crazy lineup. So it’s an experimental, interactive, psychedelic art show.

Do you feel like there will be more of these types of shows in the future?

Peter: I’m not sure if we’re going to do it again. It was just an opportunity that we had to work with some of our friends and we had the downstairs at Fortune so we wanted to make something special.

It’s almost December, what’s been the highlight of your 2015?

Peter: Getting booked to play Mexico. We’re playing Mexico end of this month, so that’s a big achievement for us. Another great thing was working with AM Only. And having the overwhelming response to Noontide was great.

What can Vancouver look forward to in terms of the future of Humans?

Robbie: We just submitted six new songs to two new labels that we haven’t worked with before. So we can’t say who they are, but it’s exciting. They are way bigger than anything we’ve done before. And me and Pete are going to have matching tattoos as of next week.
Peter: We just can’t wait to play, see everybody, and make everyone dance. And see pictures of dicks. 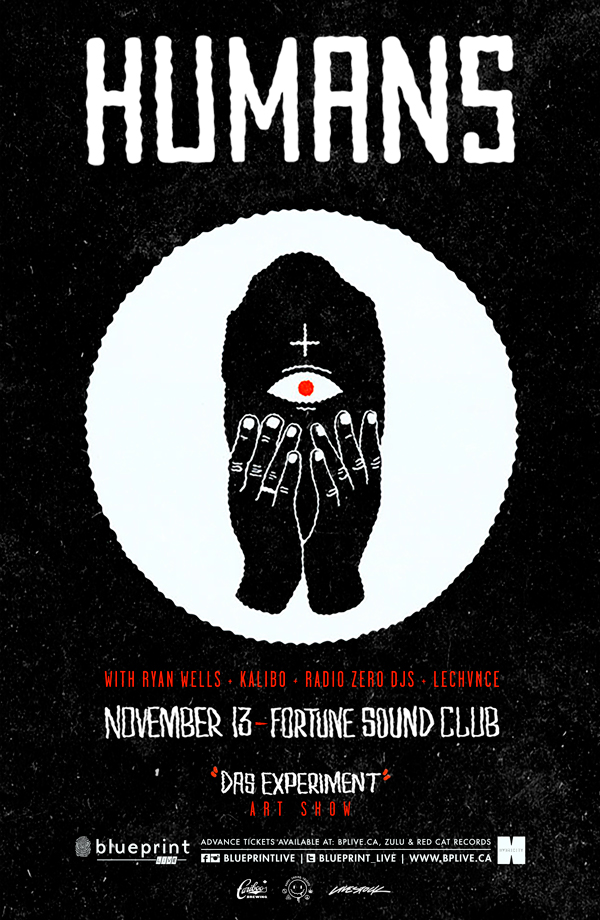