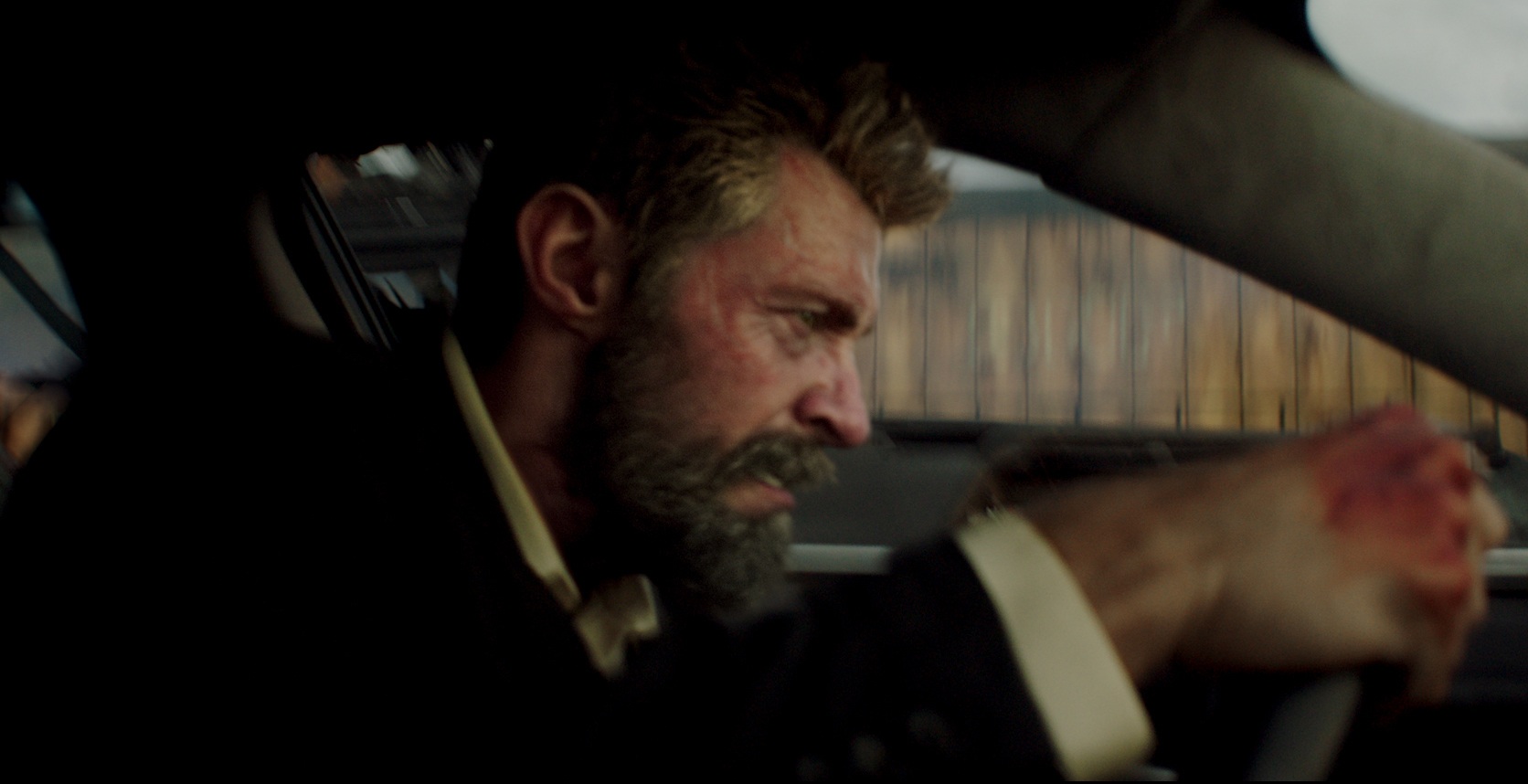 Final shot of Hugh Jackman's digital head and the stunt man's body in Logan (© 2017 Marvel. TM and © 2017 Twentieth Century Fox Film Corporation. All rights reserved. Not for sale or duplication.)

Logan may have been Hugh Jackman’s last outing as the iconic Wolverine in the X-Men series, but he went out with a bang, thanks to Vancouver’s awesome visual effects artists.

The R-rated movie is set in 2029, and follows an aging and alcoholic Wolverine/Logan, as he cares for Professor X, who is suffering Alzheimer’s and seizures.

Of course, you expect bloody violence to ensue. But what you won’t expect is that some of that violence was portrayed by digital humans created here in Canada.

“It did take us to a new level of digital human creation,” said Culpitt. “This is the closest we’ve ever got to a human for any work that we’ve done.”

Culpitt said their work to bring the digital double to life began with Jackman’s head. Or rather, the head of an animator at Image Engine.

“Right from the start we had to recreate our entire way of making a face work,” said Culpitt. “So we used one of our animators and captured the whole face shape system.”

After that, Jackman was scanned, but had to be shaved so his bone structure and full facial detail was completely captured.

Unfortunately, that meant the Image Engine team had to build his beard from scratch, working from photos of Jackman for reference.

“That took a lot of time, to make sure it was right. Even the way hairs curl and look and run down his neck is all individual, it’s like a fingerprint,” said Culpitt.

“We went through lots of iterations of beard design. It’s a crazy process… It got a bit ridiculous, but when you see it on the screen, actually it works.” 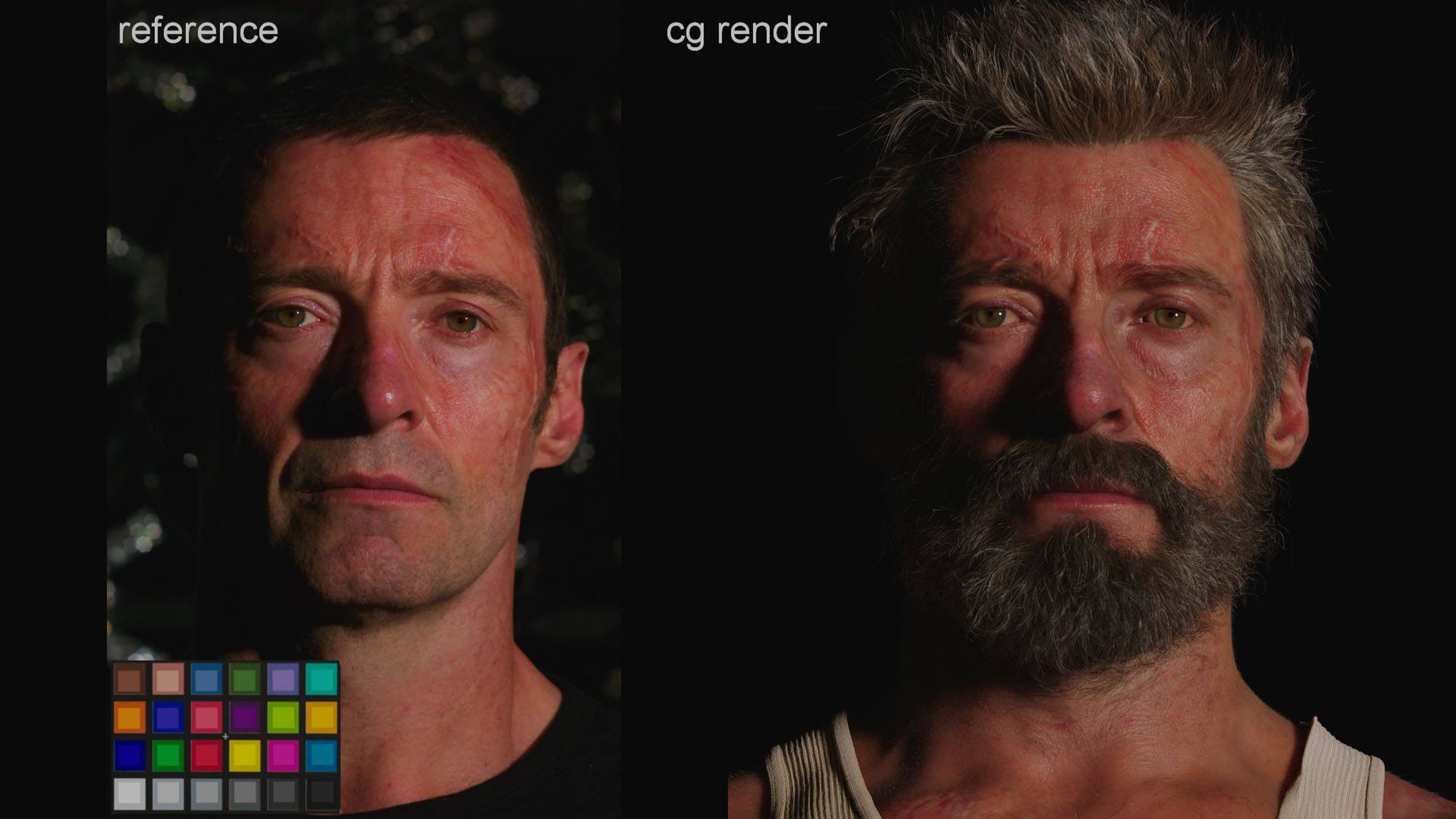 The Image Engine team spent about a year developing the look of Jackman’s digital double, as well as that of fellow actress Dafne Keen, who plays mysterious girl Laura.

“We definitely went into the ‘uncanny valley,'” said Culpitt. “It’s something that I don’t really believe in, either it works or it doesn’t work.

“There were moments where it felt like Igor, his evil twin, and then it’s about figuring out what has changed.” 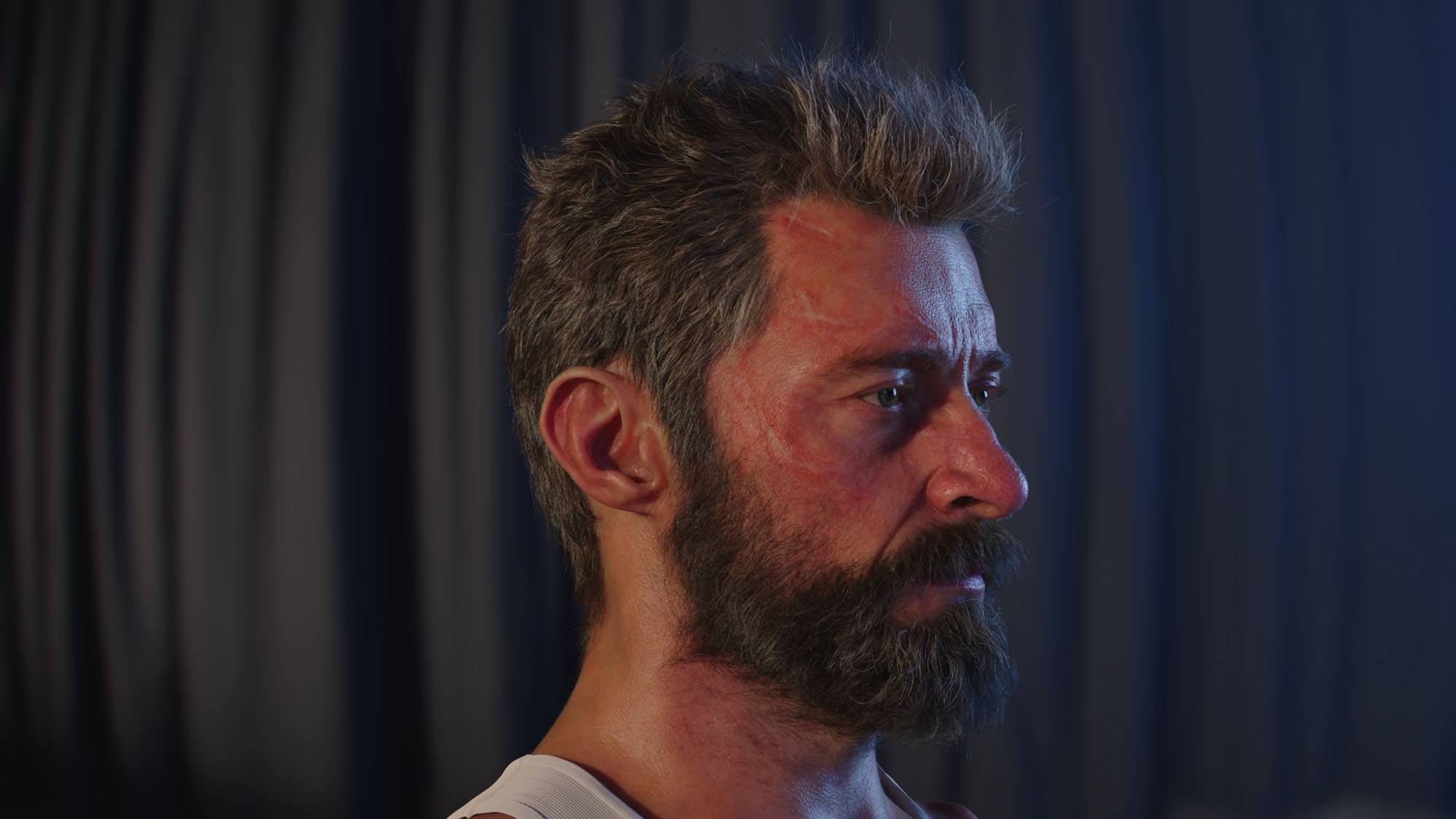 The digital double of Hugh Jackman’s head (© 2017 Marvel. TM and © 2017 Twentieth Century Fox Film Corporation. All rights reserved. Not for sale or duplication.) 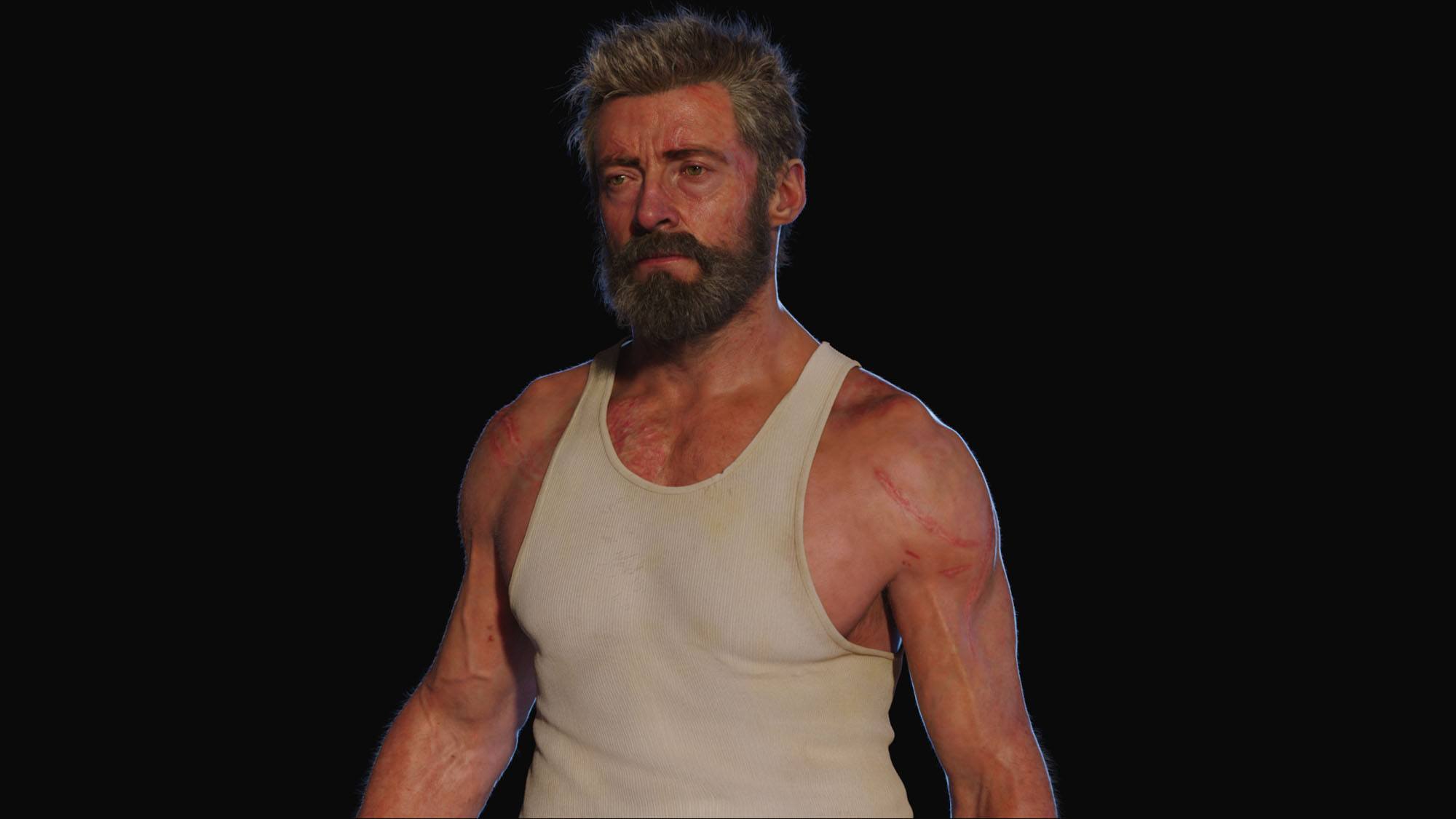 The digital double of Hugh Jackman (© 2017 Marvel. TM and © 2017 Twentieth Century Fox Film Corporation. All rights reserved. Not for sale or duplication.)

Avoiding the “uncanny valley” was just one of the challenges Culpitt faced in trying to animate a digital model of Jackman’s head believably.

The team also had to place Jackman’s digital head on the body of stunt doubles, who had been filmed on set. The digital head did the facial acting, the stunt men provided the body.

“One time… it looked like it was a mini head sitting on top, because the stunt double’s shoulders were huge.”

‘You watch it and you don’t have any idea’

Culpitt said the most challenging sequence was what the team called “Logan’s Run,” an action scene in which Logan races through the forest, blades out to attack.

He explains the sequence is made up of four separately filmed shots of Jackman or a stuntman, spliced together one after the other.

“We took that and then had to stitch the backgrounds and foregrounds, and redo everything,” said Culpitt.

“For that shot, there’s three head replacements, and a full digital double replacement. A lot goes into it.”

Culpitt explains that the lighting for the scene took a long time to perfect, as Logan constantly runs between sunlight and shade.

In order to get those details right, Jackman was scanned using the “one light at a time” process, photographed as 346 lights turned on around him.

“We did this rotation of light that we mimic,” said Culpitt. “So if you’re shining light through his ear, you get that subsurface and the details.”

“It’s awesome. You watch it and you don’t have any idea. I think that’s the takeaway from the whole thing, it’s seamless.”

‘It’s a hidden art that gets lost’ 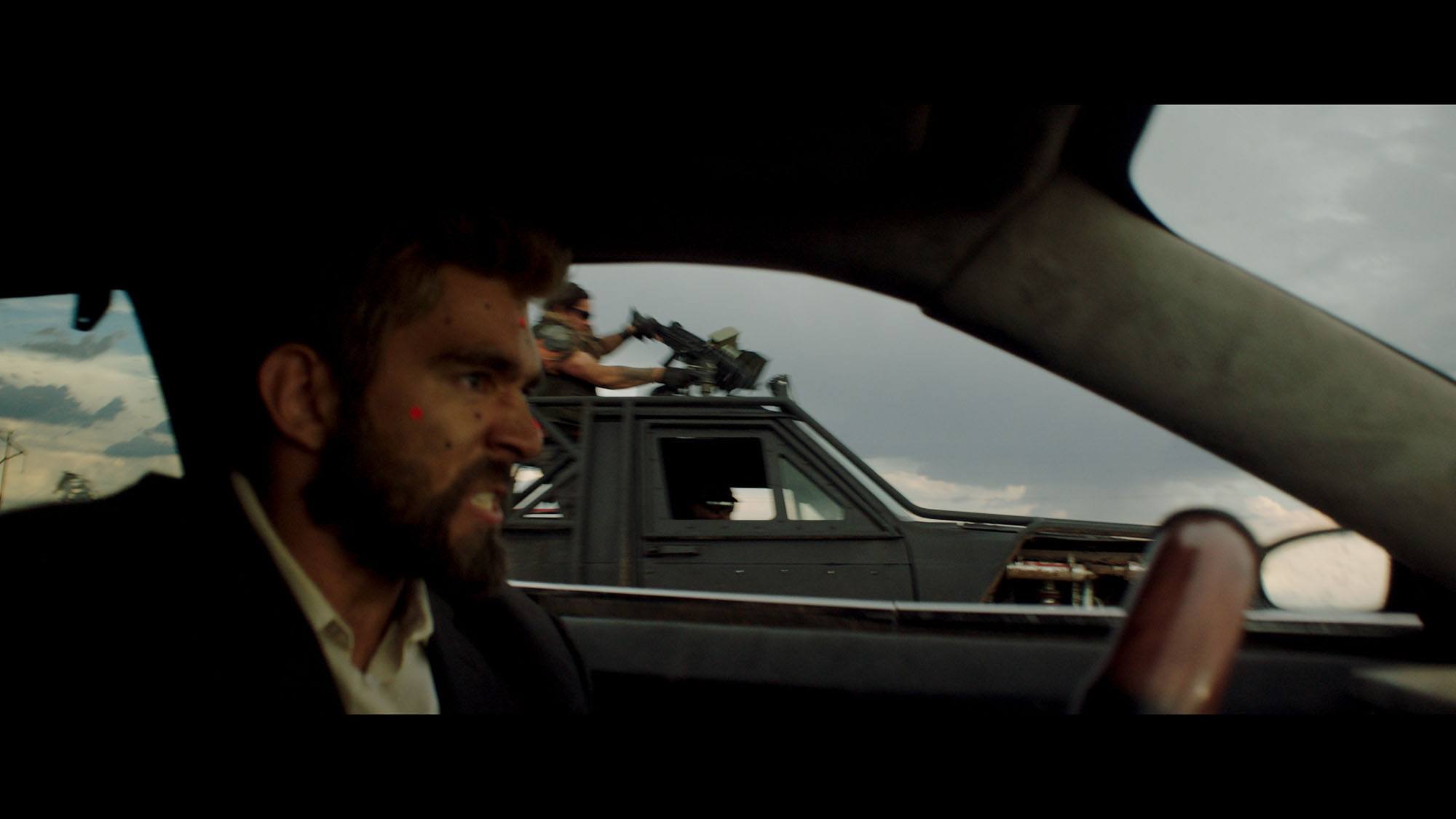 A stunt man on the set of Logan (© 2017 Marvel. TM and © 2017 Twentieth Century Fox Film Corporation. All rights reserved. Not for sale or duplication.) 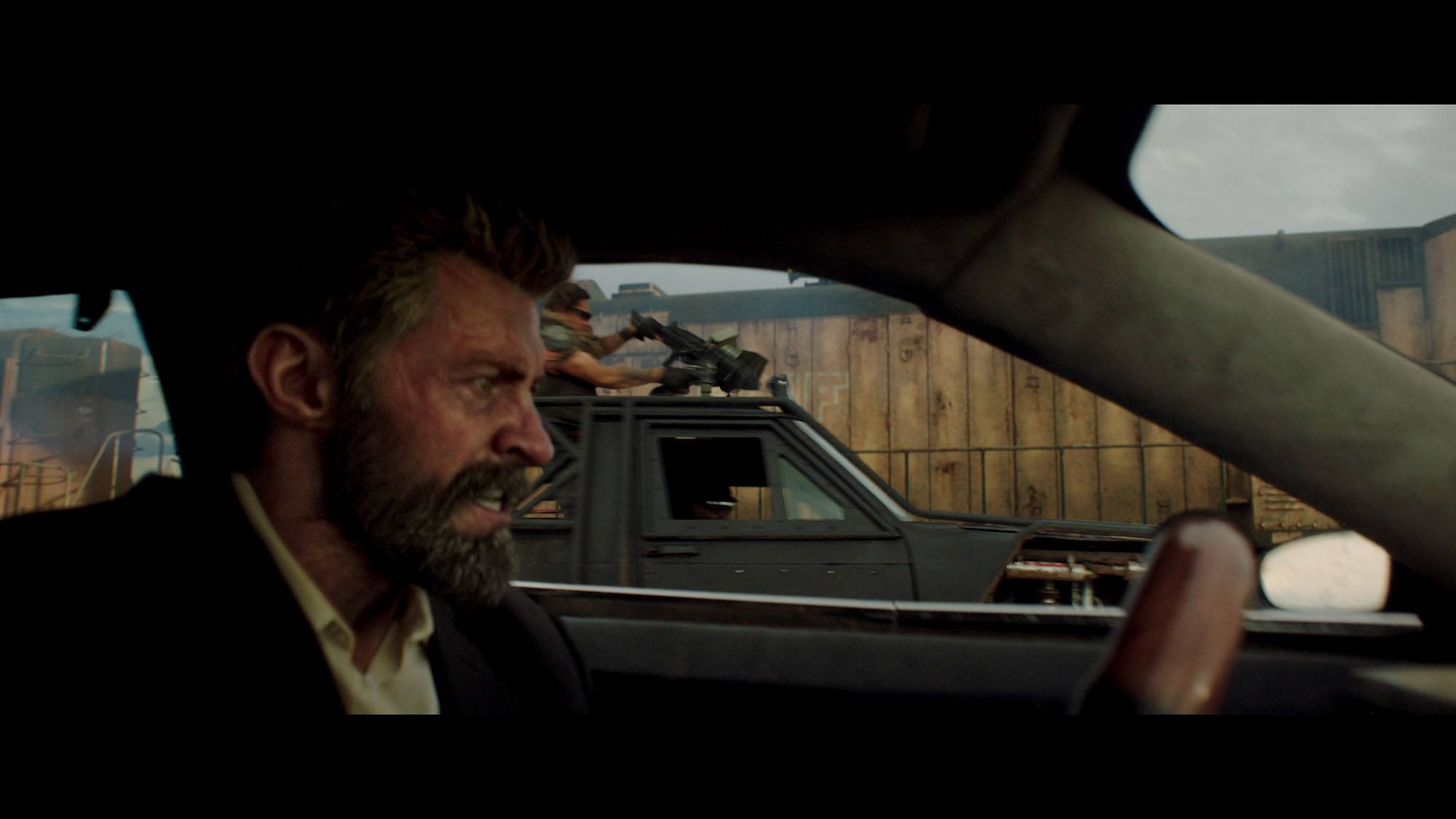 Final shot of Hugh Jackman’s digital head and the stunt man’s body in Logan (© 2017 Marvel. TM and © 2017 Twentieth Century Fox Film Corporation. All rights reserved. Not for sale or duplication.)

Ultimately, the work was so successful that even Culpitt admits mixing up the real shots of Jackman and those of the digital double in his reviews of the team’s work.

“That’s what we do best is, we strive to make stuff that’s invisible, or blends really well and you believe it,” he said.

“It’s pretty to cool to see, and there’s been such an amazing response to it. It’s phenomenal.”

“It shows that we can do it and that we push our work to the top. I think it sets a bar now for other people, which is pretty cool.”

Over the course of a year, Image Engine produced many other VFX for Logan, with 160 people working on the project at its peak.

Logan is now on the Academy’s long list for Best Visual Effects Oscar. Of course, Culpitt said, it was a team effort that deserves recognition.

“Everyone looks at Hollywood and you see the actors and all these big films, but you forget about all of us that also create that work and are a huge part of it,” he said.

“It’s a hidden art that gets lost… It’s an art that people don’t really see. They think of TV and film, but they don’t realize there’s so much that goes into it.”