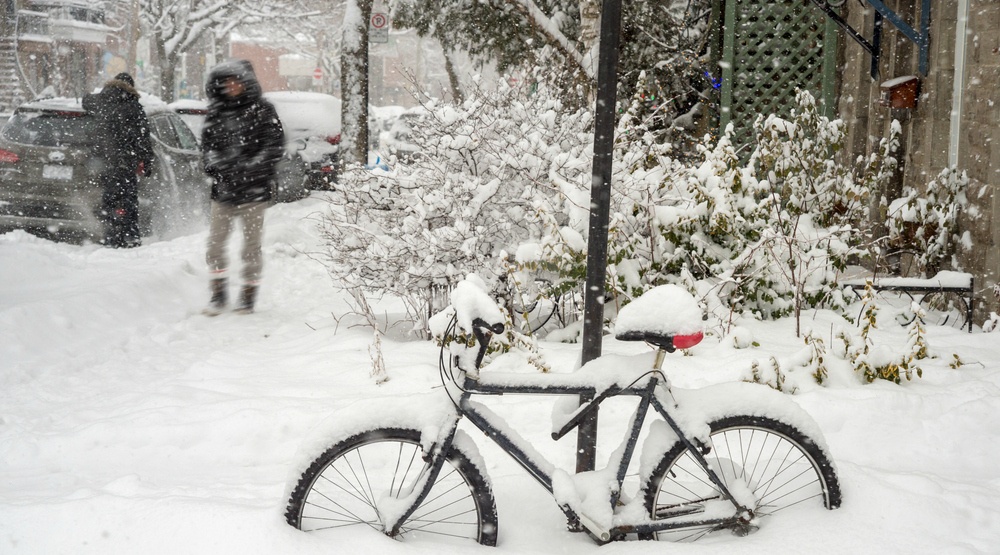 Buried under a whopping nine inches of fresh snow, Vancouver has literally been left out in the cold. Having received our yearly snowfall average in just 72 hours, Vancouverites are panicking. Will we experience another great salt shortage? Will our streets turn into treacherous ice rinks again?

Only one thing can be sure in this snowy purgatory – Vancouver does not deal with winter well. As we flounder trying to get the city back on its feet, the rest of Canada is not so silently chuckling as it seamlessly glides through its much harsher winter unscathed.

Yes, we can use the excuse that we have “a wet cold,” but let’s get serious, there’s no denying that the rest of the country has it worse off than us.

To give you an idea of what everyone else is dealing with, we’ve made a list of other cities’ February conditions.

Even during snowpocalypse part two, Vancouver has remained the warmest city in Canada by a long shot. In Edmonton, 3°C is sweater weather, in Vancouver when we drop below 5°C everyone runs to the store to buy the latest Canada Goose parka.

Why use roads when you can have skateways? With an average of -8°C this week, citizens of Ottawa have dealt with their winter transportation problems by transforming the Rideau Canal into a giant skating rink.

Who says you can’t canoe year-round in Montreal – not the Quebecois. Since all local water bodies are currently frozen, watersport lovers have changed their liquid passions to include their frozen counterparts by canoeing on ice. Contrast this to the mainly thawed lakes of Vancouver which remain deserted throughout the winter.

Edmonton has embraced the cold by building life-sized ice castles to be enjoyed by all. Locals can slide through the castles, or walk around and marvel at their beauty. Note: Even at temperatures well below freezing, Edmontonians continue to wear jeans while sliding down the bare ice.

Who knew you could put snow tires on a Formula 1 car? The University of Saskatchewan did, that’s who. What can beat driving on a frozen lake. It’s simple, you just clear the snow and practise your donuts directly on the ice. Guess that’s why Saskatchewanians are such good drivers.

Last weekend in Vancouver, the city cancelled the First Half Marathon due to icy conditions. Simultaneously in Winnipeg, people are still electing to run outside, and they’re even jumping for joy about it. Well, that’s just showing off.

Don’t want to walk on a rocky beach? No problem for residents of Halifax. Instead of dealing with the rocks, they can surf in winter and walk on soft snow instead. Imagine what the polar bear plunge looks like there.

To think people in Vancouver complain about shoveling their sidewalks. St. John’s, Newfoundland (not to be confused with Saint John, New Brunswick) receives the largest dumping of snow in Canada, turning sidewalks into snow-walled trenches for most of the winter. Thank god these kindhearted Maritimers make the effort to keep the side walks clear-ish all year round.

Unlike most Kitsilano dogs this time of year, Saint John’s dogs don’t wear shoes. Who knew dogs could survive the winter without the addition of pawwear.

Is the ocean seriously frozen?! Yes it is, and this is still technically considered “Southern” Canada.

North of the Wall

Northern Canada is the spiting image of the stereotypical Canadian winter. It’s almost laughable seeing all the “Canadian winter” hashtags on Instagram and realizing how many Vancouverites think they’re living the tough life. With most days being in the negative double digits in Whitehorse, the term covered from head to toe applies all too literally.

Just saying, once again the dogs are shoeless.

Meanwhile in Yellowknife, people are wearing Canada Goose parkas for their original purpose – being in the arctic. All this while looking pretty fashionable according to Vancouver standards.

The weather of Iqaluit gives a whole new meaning to the word cold. Funny enough the isolation of the far north is similar to what Vancouver experiences when our cars get blocked in by snowplows – not leaving the house today, I’ll just stay right here curled up on my iceberg #sadface.