All images courtesy Esther Ever After.

Four years ago Ontario realtor Steve Jenkins helped out a friend by taking in their “micro piglet” they’d purchased on the internet.

But the so-called mini pig was anything but. Esther was actually a commercial hog, and within three years she weighed 600 pounds. That’s right: A 600-pound farm animal, living in their suburban bungalow. 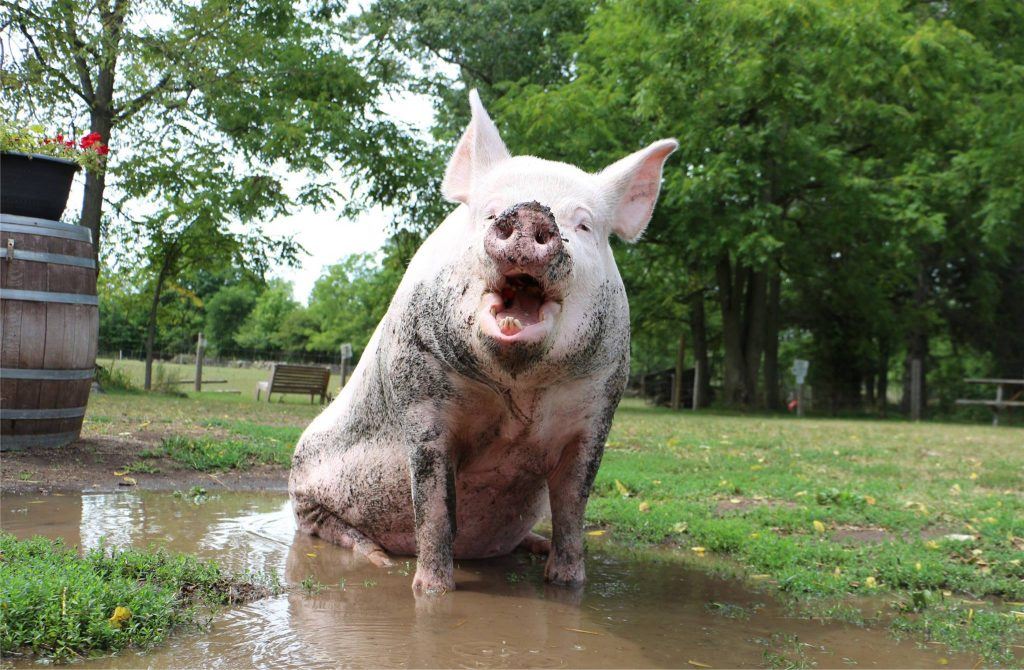 Steve and his partner Derek Walter started documenting their journey on Facebook, inviting fans of Esther the Wonder Pig to follow them as they struggled with the hilarity of raising a giant pig as a member of their family. And that includes pig-sized pees on the floor. As Esther grew, so did her popularity: The pig now has 800,000 Facebook followers.

“We had no idea what we were in for,” Jenkins said.

“She can open doors, cupboards, the fridge, even our sliding patio door. Esther and all pigs are so unbelievably ‘human’ in their personalities, even displaying signs of full-on scheming to get her way.

As it became abundantly clear Esther needed more room, Steve and Derek made the life changing decision to start a farm sanctuary.

With $400,000 raised through crowdfunding in just 60 days, the duo opened Happily Ever Esther Farm Sanctuary (HEEFS), where they could care for Esther and other animals in need.

Their adventures are now the subject of a the New York Times bestselling book, “Esther the Wonder Pig: Changing the World One Heart at a Time.”

Here’s an excerpt from my interview with Steve about life on how this “wonder pig” has opened the hearts and minds of people across the world.

Adopting Esther made you realize how alike she was to your dogs. How?

We immediately noticed her playful and inquisitive personality. She loved toys, ran all over the place shaking her bum, it was like watching a puppy with a funny nose. We also started to see her sensitive side, and how much she loved affection. She still comes looking for one of us if she gets startled, or when she just wants to cuddle. 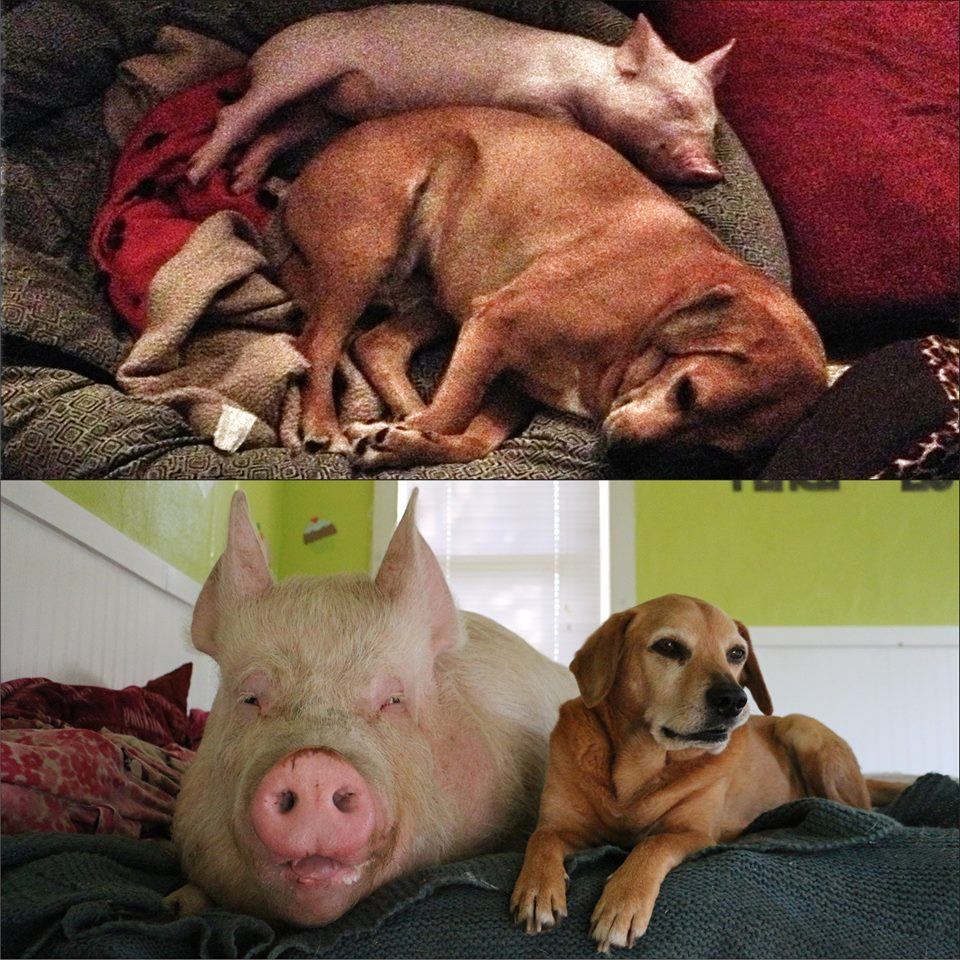 Esther as a piglet, and now full grown, with the family dog.

In the book you describe cooking bacon for supper and feeling that eating pork is the same as eating your pet. How has Esther changed your eating?

We never in a million years would’ve thought we’d be living an “Esther Approved” lifestyle. I LOVED bacon. It was because we realized that Esther could’ve been that bacon, and we had now seen firsthand that Esther was every bit as deserving of our affection, as our dogs or cats. We had a wall built up that allowed us to disconnect from what our food actually was, but Esther gave our food a face, and tore that wall down like a ton of bricks. 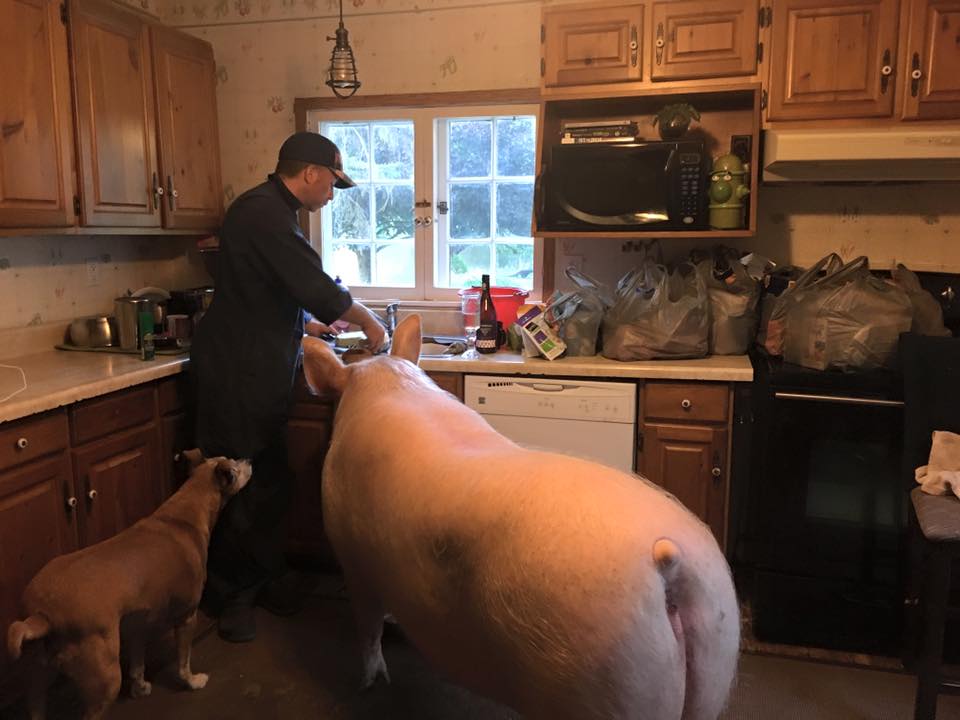 When people meet Esther do they make that connection?

They do, and in a very powerful way. We get so many messages saying Esther has changed their opinions of “farmed animals.” It feels like we have completely stripped farm animals of their individuality, they’re nothing but barcodes in a grocery store to most people. When you see them at HEEFS sanctuary, you get to see who they really are. Their unique personalities really hit home, and it helps plant that seed that they might not be as different as we though, when compared to the companion animals we typically share our homes with. 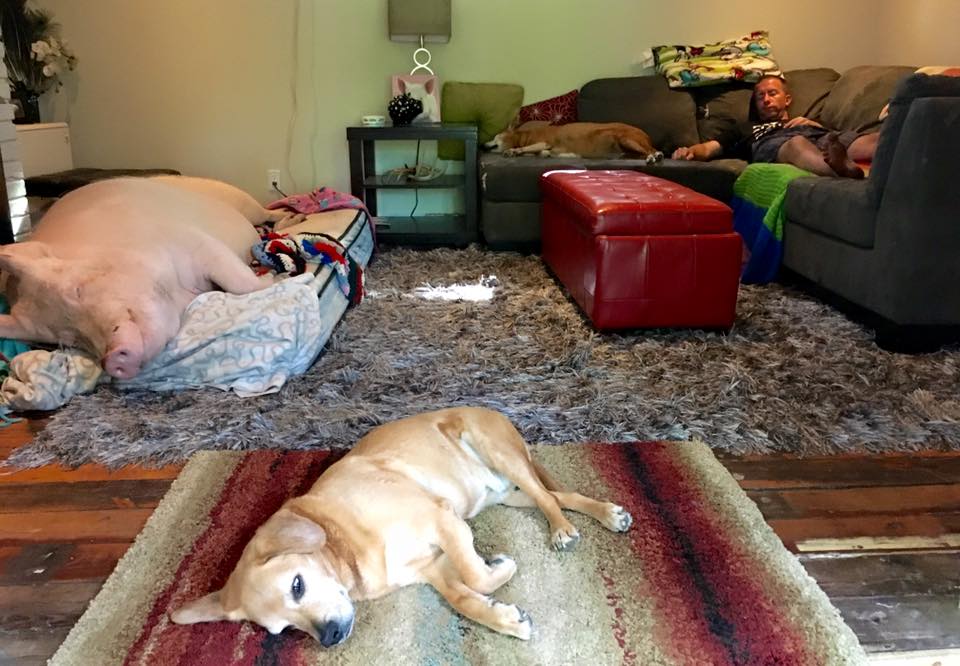 What would you tell someone who wanted to adopt a mini pig?

Visit a local sanctuary so you can get to know a pig first. Learn more about them, and make sure you fully understand what it means to bring a pig into your family. There’s also a very serious by-law concern, as many municipalities still have by-laws in place that prohibit “hooved animals” as pets. That includes potbellied pigs, and pigs like Esther. 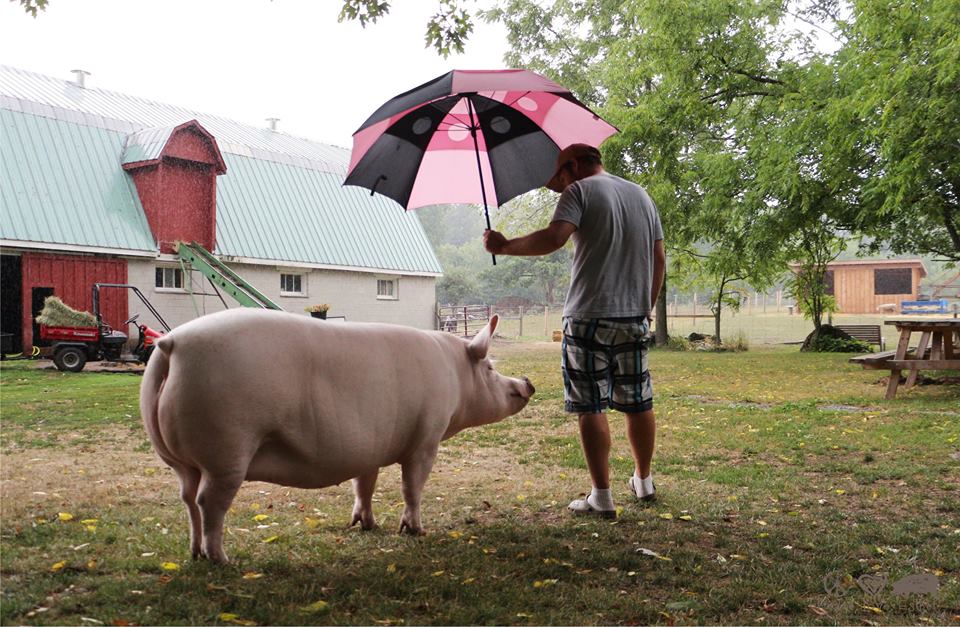 And people should always adopt?

Yes! Adopting helps solve a problem, not creating one by getting a pig that turns out to be “more” than you expected. Adopting typically means you’ll be getting a “teenager,” meaning you can make a much better guess as to what their full-grown size will be. You can also get an idea of what their personality is, and how it will fit with your particular family situation. With so many pigs in shelters, there’s absolutely no need to get one anywhere else. 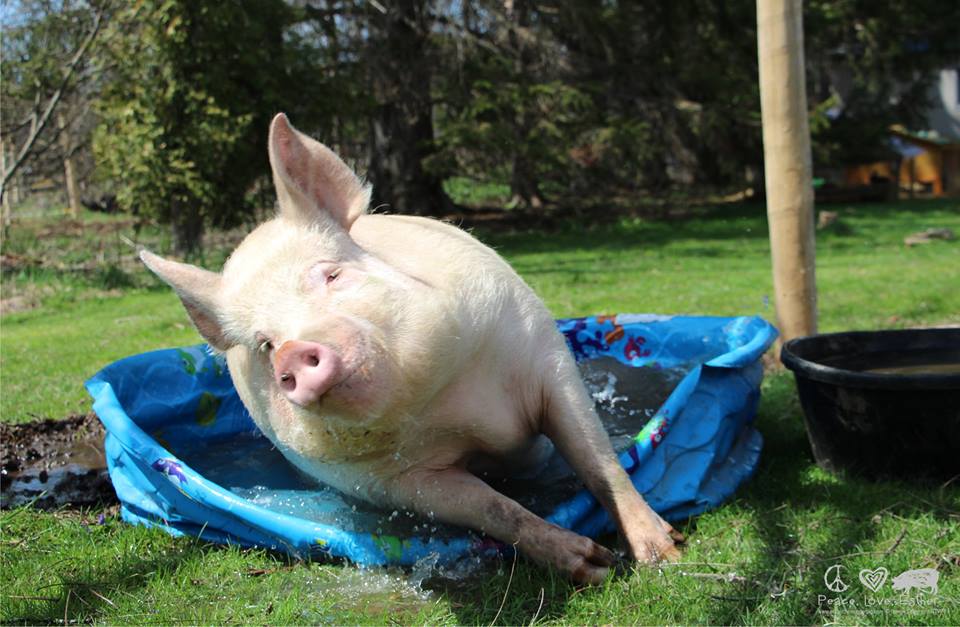 What’s the message you want people to take from the book?

If you’re willing to try – no matter how crazy you, or your friends/family might think you are – that you can do anything. We needed to raise $400,000 in under 60 days, and we had no idea how to do it. But we did it. Even we thought it was insane, but it meant everything to us, and we knew we had to try. If we didn’t believe in ourselves, none of this would’ve happened.

We want people to think a little bit harder about what it means to never give up. Esther pushed us to our limits on many occasions, but we knew we couldn’t live with ourselves if we gave up on her. We had fallen in love with the most unlikely companion, and we had made a commitment to her when we brought her into our family. Too many times we throw things away because it’s the easier thing to do.

Finally, we want people to understand the power of a smile. Esther’s smile quite literally changed our life, and probably saved hers. “Kindness Is Magic” is a phrase we use all the time, because there’s no other way to explain how this all happened. Ultimately it’s all because of a pig, her amazing smile, and the decision to be as kind – in all aspects of our lives – as we possibly can. 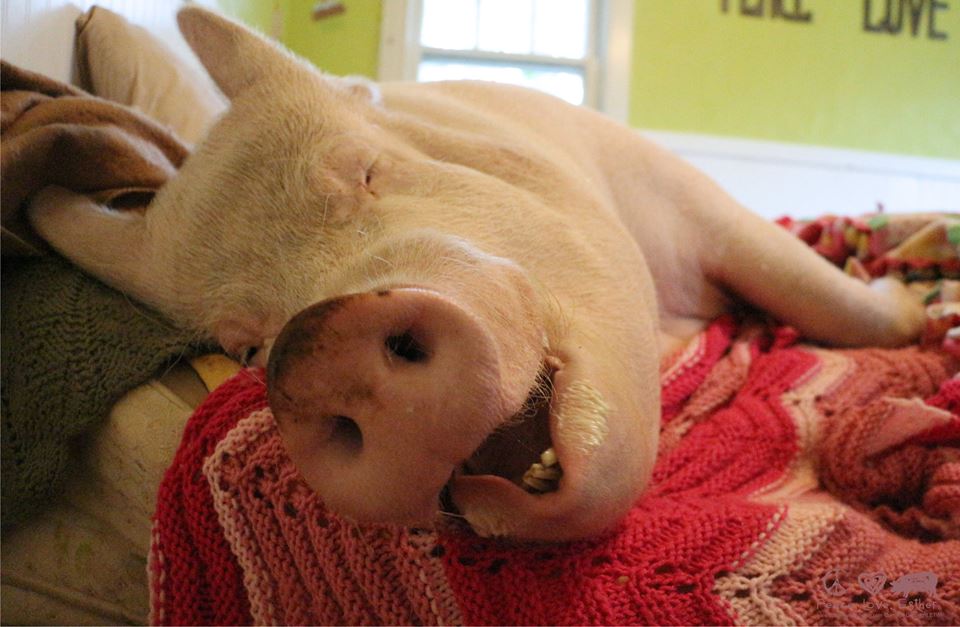