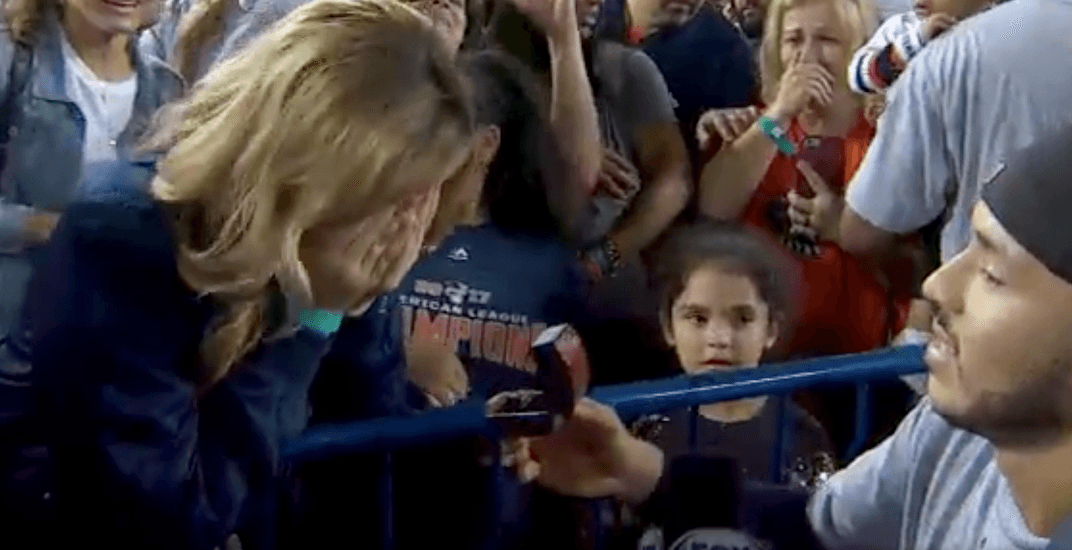 Did he have it in his pocket the whole game?!

Houston Astros short stop Carlos Correa combined two of the biggest moments in his life into one night on Wednesday. Shortly after his team defeated the Los Angeles Dodgers 5-1 in Game 7 of the World Series, he proposed to his girlfriend, Daniella Rodriguez, on live television.

Correa then searched out his girlfriend from the nearby crowd, pulled an engagement ring from his back pocket, and said: “Daniella Rodriguez, you make me the happiest man in the world, will you marry me?”

She said yes, of course, and was overcome with emotion.

Now, if you’re like me, you’ve got a lot of questions.

Where did this ring come from? Surely, he didn’t play with it in his back pocket. He couldn’t have just kept it rattling around in the dugout.

If they lost, would he have proposed?

It turns out, Correa’s plan included one of the clubhouse attendants, who was to give the short stop the ring if the Astros won. The plan was to originally pop the question after Game 6, as Houston held a 3-2 series lead.

The reporter was also in on the secret, having been told of the plan by Correa after Game 5.

When the Dodgers won to force a Game 7, the plan was altered.

The World Series win was the first for Correa, who is in just his third Major League season. It’s also the first championship won by the Houston Astros franchise since entering MLB in 1962.