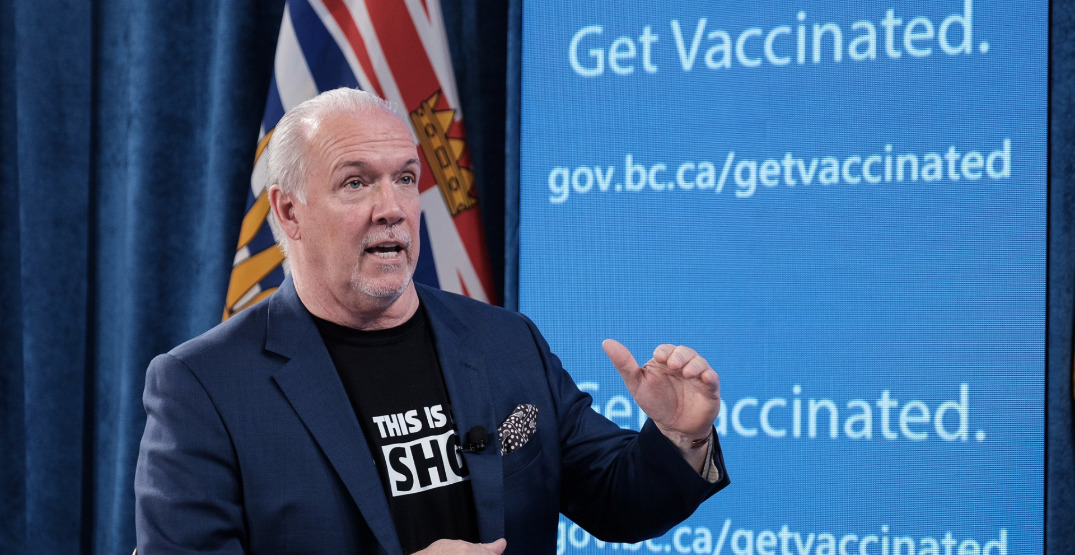 A conversation is raging on social media regarding comments BC Premier John Horgan made in relation to COVID-19 earlier today at a press conference.

The conference had nothing to do with COVID-19. It was actually an announcement about hydrogen in relation to BC’s clean-energy future.

During the Q&A portion of the press conference, Horgan was asked several questions about COVID-19.

A reporter said that they were out last night and noticed there was no hand sanitizer anywhere. They went on to say that they hear, “and I’m sure you hear it a lot,” that people are feeling left behind and vulnerable as restrictions are being lifted.

They asked if the premier had anything to say to those folks, like people who have compromised immune systems or other issues.

“I apologize to those who have pressing questions,” said Horgan.

“I would say to those who feel vulnerable, carry hand sanitizer with you. Even if you don’t, carry some in case you come upon someone else who has to randomly shake a hand and would prefer to have hand sanitizer.”

The premier apparently faced a scenario like this himself after shaking hands with a complete stranger.

“As the individual walked away someone came over to me who had a product on a string around his neck and said, ‘Squirt?'”

Folks on Twitter felt that Horgan missed the point.

No…wait. Is this a serious comment by someone who just admitted that Covid is Airborne? Note language: “unease” “vulnerable” “left behind”. Government comms working overtime to “other” those who understand what’s going on here. Sanitizer? 🤣🤣🤣👎👎👎

He did go on to say that he understands that people are feeling uneasy.

“I do as well [feel uneasy] to a degree because of being compromised by the radiation treatments that I’ve just come through.”

I have about a 1 in 10 chance of dying if I catch this (organ transplant, immunocompromised).

Hand sanitizer ISN’T GOING TO DO IT JOHN.

My “unease” is with the government’s inability to understand COVID.

Horgan also stated that he’s confident that those around him have taken steps to protect themselves and him in the process, giving him the confidence to go into conference rooms and other public settings.

Ok Horgo. Let’s see you hold a packed press gallery, maskless and with unvaccinated attendees. Show us how safe we are simply using hand sanitizer.

BC faced heat earlier this week from the BC human rights commissioner, who urged Provincial Health Officer Dr. Bonnie Henry to reinstate the mask mandate to protect vulnerable people in the province.

As someone currently battling #Covid after avoiding it for 2+ years, I couldn’t be more appalled by @jjhorgan’s laissez-faire attitude. I didn’t get it because I failed to sanitize my goddamned hands, I got it because the mask mandate was rescinded. #bcpoli

Despite the outcry on social media, Horgan is still one of the most popular premiers in Canada, according to a recent Angus Reid poll. A large part of that approval stems from Horgan’s handling of the COVID-19 pandemic.

BC is set to provide an update on its COVID-19 response next week.