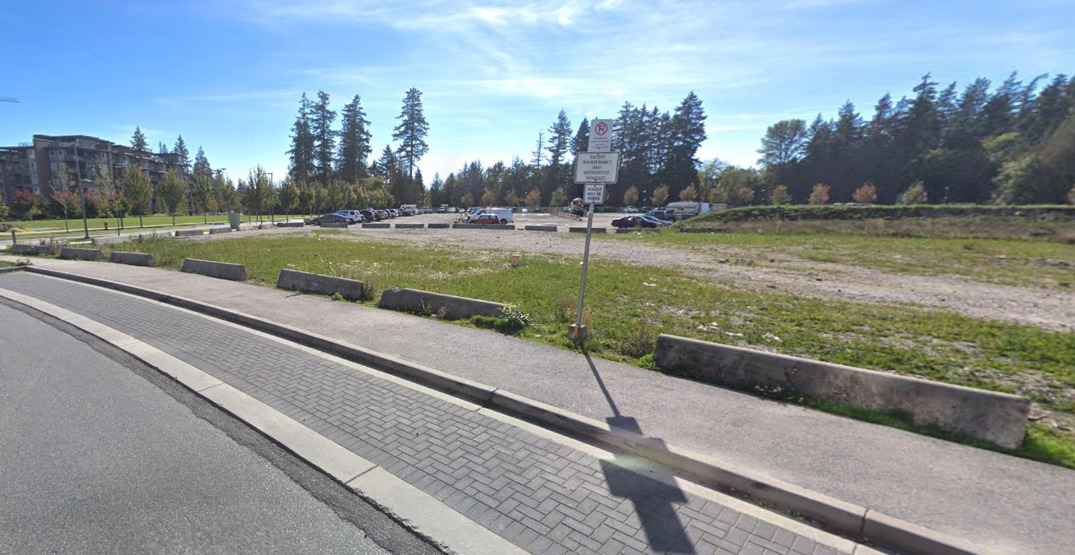 Where the court would have been located. (Google Maps)

A basketball court development application proposed for the Wesbrook Place neighbourhood in the UBC Endowment Lands has been withdrawn following complaints from nearby residents.

According to a report from the University Neighbourhoods Association (UNA), the board requested that the UBC Properties Trust withdraw the development application.

According to Ubyssey, posters were spread around the neighbourhood suggesting that noise, safety, and displacement issues were the drivers behind the withdrawal.

Daily Hive Urbanized spoke with the UNA’s Chief Administrative Officer, Sundance Topham, who suggested most of the concerns were related to noise, but there were also safety concerns for the surrounding areas.

“The three delegations spoke to various concerns, mostly in relation to noise concerns, but also concerns were raised in relation to [the] safety of users of the neighbouring water park, paving over green space, and community consultation processes.”

When asked if there was push back on the decision to withdraw the application, Topham said, “there have been a number of residents who have expressed their concerns on how the process unfolded, and have submitted those concerns to the UNA.”

Charles Menzies is a professor in the Department of Anthropology at UBC.

On November 20, in the wake of the UNA decision, he penned a blog post regarding the proposed basketball court on his personal website. In the post, Menzies reflected on some of the concerns cited by the UNA, suggesting that they were unfounded. He also suggested that there have been campaigns to prevent or decommission courts across North America.

“Basketball is a low barrier sport. It doesn’t take a lot of expensive gear or high-tech facilities. At the base all one needs is a patch of ground and a hoop to shoot into,” says Menzies.

“Underlying the campaign against public outdoor courts is a set of ideas that revolve around ‘noise,’ ‘danger,’ and ‘property values.’ Each of these claims are unfounded opinions. Even worse, there is documented evidence that they are not a simple misconception, but are factually wrong.”

He goes on to say that complaints about possible noise are factually incorrect.

“For example, in a Portland study of parks it was found that the noise levels from skateboard parks and basketball courts were no different than any other outdoor park. The park noise was 70db at 50 feet from the park (and indistinguishable from ambient levels at 200 feet), less than what the UNA allows for power equipment.”

What do the people think?

Some on social media have also suggested a racial component may have played a part in the opposition to the court.

NIMBY’s would have accepted any sport that was less likely to draw Black and Brown people to the @UBC campus.

Every person in my family gets a degree but @UBC will not be our place if the locals are so hostile!
That loss of diversity is a backwards cultural move.
Shame on UBC.

This development carries no relation to the construction of a basketball court at UBC’s Point Grey campus.

In the end, for the youth in the neighbourhood who might have finally had an outlet to express themselves with a fadeaway, a three-pointer, a lay-up or a slam dunk, shattered hoop dreams are all that are left.