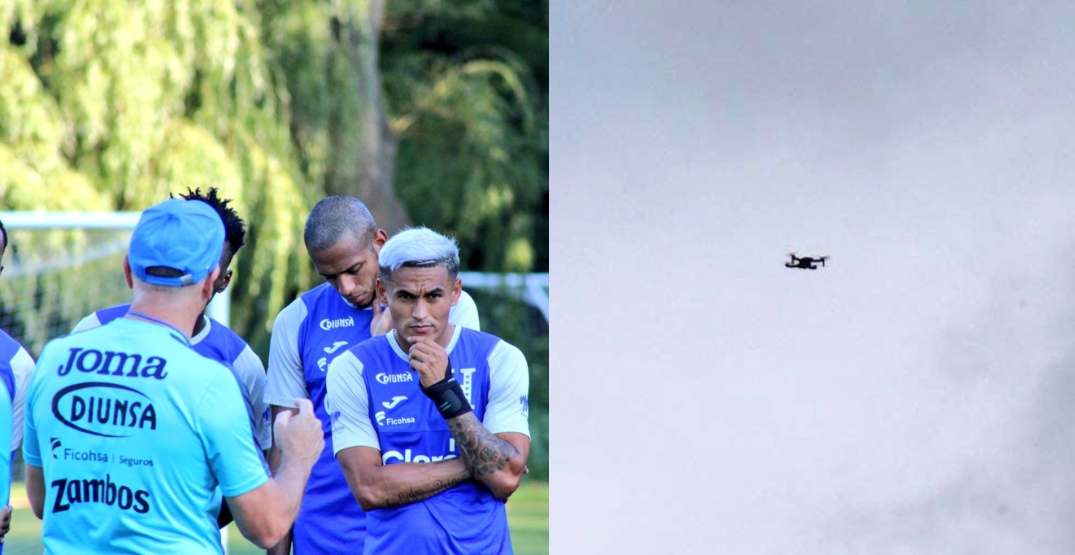 The Honduras national soccer team was on the lookout for Canadian spies on Tuesday, ahead of their match against Canada this week.

A drone was spotted in the sky, forcing Honduras to pause practice for fear of falling victim to Canadian espionage. Canada and Honduras kick off the final round of World Cup qualifying on Thursday with a match at BMO Field.

Their coach had to “take action on suspicions of possibly Canadian spies,” according to a report in Honduran publication Diez.

Honduras stopped practice until the drone left the airspace.

“Spies are reported,” reporter Carlos Ordonez said in the above tweet, translated from Spanish. “From the concentration of everyone’s team there is discomfort for what is obviously an act of espionage around the preparation work prior to the game this Thursday.”

Team Canada head coach John Herdman had a different explanation when speaking to reporters about the drone today.

“I imagine that there’s probably a lot of people in Canada that fly drones, I’m sure,” said Herdman. “And when a big team like Honduras turn up, I’m sure people are probably interested in what they’re doing when they come into our country.

“We won’t be heading into people’s countries too early because… with drones these days people can obviously capture footage. You’ve got to be really careful. So, yeah, you got to be careful in CONCACAF. It’s a tricky, tricky place.”

Fans trying to influence the outcome of matches with off-field antics is nothing new in CONCACAF.

Canada often has to deal with rowdy fans in Central America trying to disrupt their sleep prior to away matches. Prior to a match in Panama in 2012, fans held a street party outside of Canada’s hotel, which included the lighting of fireworks the night before a World Cup qualifier.

While we don’t know who flew the drone in Toronto, Honduras does have reason to be a bit paranoid.

The top three teams in the upcoming eight-team competition will qualify for the World Cup, with the fourth-place team advancing to an inter-confederation playoff. Canada and Honduras both have a great shot to earn World Cup berths, as the fifth and sixth ranked teams in Concacaf, so the matches between them are of heightened importance.

With elite talent like Alphonso Davies and Jonathan David on the roster, there’s real optimism that this generation of Canadian players can get our country back to soccer’s brightest stage.

This is the first time in 24 years that Canada has reached the final stage of qualifying in Concacaf. Canada last qualified for the FIFA World Cup in 1986 — the first and only time in our country’s history.

As a bonus, it appears the games will be televised in Canada. National team matches in recent years were only seen on online streaming site OneSoccer, as fans wondered why TSN or Sportsnet wouldn’t step up to secure the television rights.

All three of Canada’s 2022 World Cup qualifying matches this window will be shown live on major Canadian TV networks.