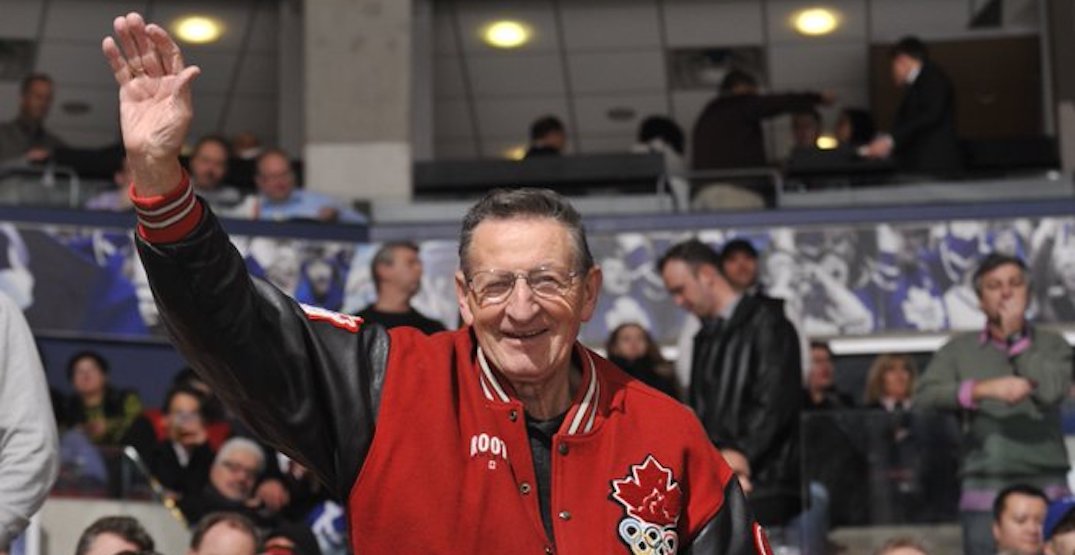 “Canada’s hockey dad,” Walter Gretzky has passed away, his son Wayne Gretzky confirmed the news through a social media post on Thursday night.

Wayne said that his father had been battling Parkinson’s and other health issues for the last few years.

Wayne credited Walter as the reason he fell in love with hockey and inspired him to be the best. Walter became a Canadian celebrity in his own right, with stories of him building a backyard rink for his children in Brantford, Ontario, now legendary.

In recent years, he became a crucial figure in hockey, with Watler’s impact coming from his philanthropic work. Walter’s passing resulted in many messages of remembrance from across the hockey world.

My dad and Wally, just two dads talking hockey, heading to see Cirque in Vegas. As good as they come, we will all miss you Wally. ❤️ #waltergretzky pic.twitter.com/FLbXsIDDpc

Walter Gretzky cared deeply about his family and his community – his kindness was undeniable, his passion was obvious, and his impact was immense. My thoughts are with Wayne and the entire Gretzky family, and all who are mourning the loss of Canada’s hockey dad.

The Great Ones father had time for everyone. RIP ❤️🙌🏿 pic.twitter.com/n95DnhlVHs

To the entire Gretzky family, I am so sorry for your loss. Anyone who ever crossed paths with Walter, however briefly, will be feeling a sense of loss today, too, because just to meet Wally was to feel like you knew him and he knew you. Just a really special guy. https://t.co/GPjvvMnrMA

He was truly a great guy. Godspeed Walter. pic.twitter.com/aiV7Oh9DOC

In deepest sympathy to Wayne & the entire Gretzky Family on the passing of patriarch Walter Gretzky. A finer gentleman you would be hard pressed to find. Offering prayers & Blessings during this difficult time.

So very sad to learn of the passing of Walter Gretzky this evening. He was 82. As much as he was his son Wayne’s biggest fan Walter was a huge Leaf fan and was seen repeatedly at Leaf home games. Our condolences to @WayneGretzky and the entire extended Gretzky family

I’d also like to add, that as a kid who played hockey it was next to IMPOSSIBLE to find yourself at a weekend tournament in Brantford without catching a glimpse of Walter Gretzky.

Yes, even at the girls tournaments.

He loved the game.
No matter who was playing.

RIP Walter. I absolutely enjoyed every time me and my family got to spend time with you. 😢Thank you for being a classy and humble guy. You were a great example to all parents who have kids that play our great sport. pic.twitter.com/1dSD0F4YLz

Always the gentleman. Always had a smile and so incredibly generous with his time. Canada’s hockey dad is a very fitting description. Deepest condolences to Wayne and the entire Gretzky family. https://t.co/LShfkb0V7l

The hockey world lost a great ambassador and loving father/grandfather. He always made time for everyone. RIP Walter pic.twitter.com/liOkYNH1ez

Walter Gretzky came to many @hometownhockey_ stops. He dropped pucks, signed autographs, took photos, and held court… the arena was his kingdom. He brought joy to everyone.

To the Gretzky family and all who loved Walter, my deepest condolences. May he Rest In Peace. 🏒❤️ pic.twitter.com/j764oIm2yd

I’m so sorry to hear of Walter Gretzky’s passing. A legend. A gentleman. A kind soul. He cared about so may others before himself. I think that if we aspired to be half as great as Walter, we would be ok. RIP Walter. My sincere condolences to the entire Family. 🙏🏻@WayneGretzky

Canada’s Dad. Such a wonderful man. Condolences to the Gretzky family. https://t.co/FzFSi0yduw

Very sad to hear that Walter Gretzky has passed away at his home in Brantford at the age of 82. He was Canada’s hockey dad and so much more: unfailingly kind to people, he worked tirelessly for charities and was beloved wherever he went. RIP 🙏 pic.twitter.com/6TAPzx3V6R

Walter Gretzky got wind of when my twins were born years ago and sent me this bottle of wine and penned this message on it. Such a kind man. pic.twitter.com/aKNMPycPt4

"Everyone knows his impact, not only on his boys playing the game, but overall in the hockey community. You know what he brought to the game. We recognize that and just want to give our condolences to the Gretzky family"