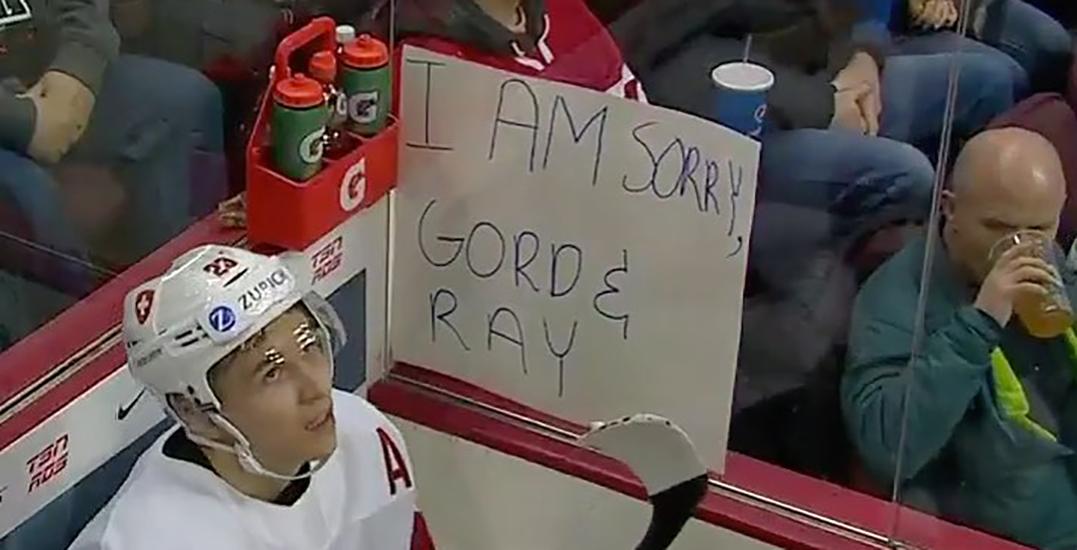 This Canadian hockey fan might just be the most clever spectator of the 2019 World Junior Championship.

Less than a week ago, a man wearing a 2010 Team Canada jersey managed to snag an autograph by handing a pen and paper to Finland’s Urho Vaakanainen.

Here’s the catch though – the autograph took place while the 19-year-old defenceman was serving a penalty, during a pre-tournament game that Canada dropped to Finland, 5-2.

The 2017 first-round pick of the Boston Bruins simply nodded, signed the sheet of paper, and handed it back to the smiling fan.

TSN’s broadcast caught the exchange, much to the delight of commentators Gord Miller and Ray Ferraro.

He managed to score another autograph, this time from the 19-year-old forward, although Ray Ferraro was less than impressed, a second time around.

“That would get annoying after a while,” chimes in Gord Miller.

“Uncle, man this guy is relentless,” Ferraro comments. “Honestly, I would say to my team, if I were coaching, enough. When the guy asks you, just tell him to watch the game.”

So what’s a guy to do, after being called out by two prominent broadcasting figures in the hockey world?

If you’re him, you use your seats to the best of your advantage.

The fan returned the next day, on Saturday, December 29, making an appearance during Denmark and Switzerland’s afternoon match.

When Switzerland’s Philipp Kurashev took a penalty in the second period, there was no pen and paper being passed into the sin bin. There was, however, a written apology from the fan and a white sign that read “I am sorry, Gord and Ray.”

It’s safe to say he didn’t get an autograph while the alternate captain served his penalty, but you certainly can’t blame him for trying.