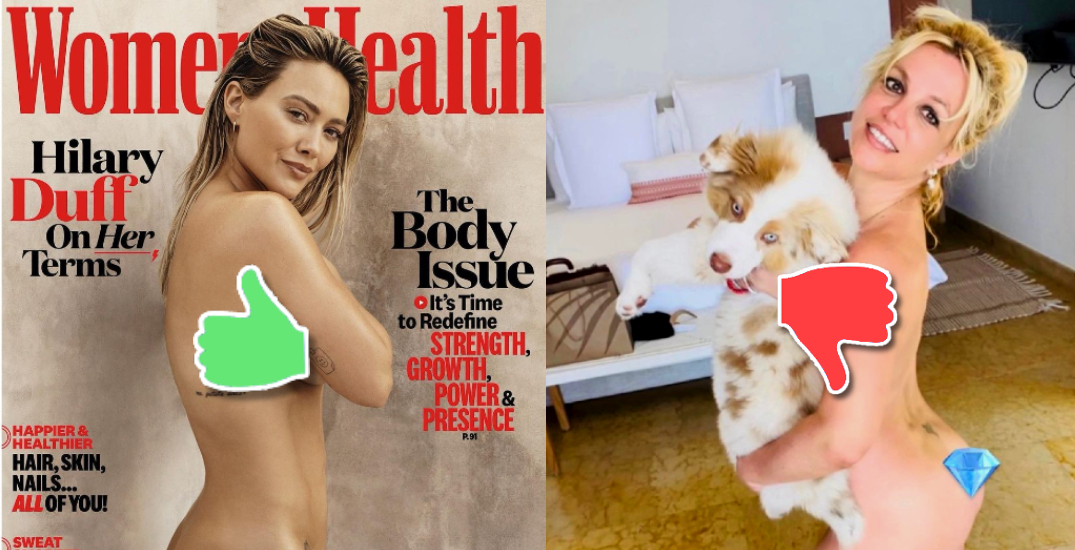 Hilary Duff graced the cover of Women’s Health Magazine in the buff this past week, and now, the internet is discussing the differential treatment of Britney Spears.

The 2000s icon shared the cover on Instagram. “I knew doing this would terrify me, and I was right!” she wrote. Thank you to everyone who normalized this day for me and propped me up with compliments and love.”

Hilary added that she felt vulnerable but powerful and beautiful doing the shoot. The actor-singer’s photos have been received with open arms by her fans.

But people are also comparing them to the nudes shared by Britney Spears on her Instagram.

Britney has been posting blurry shots of her nude self on Instagram, with emojis covering her privates. Sometimes, she shares “photo dumps” where she repeatedly posts a single image with different filters.

But the public responses to her posts are primarily based on concerns for her well-being.

You just love to criticize Britney Spears for everything she does. Jus admit it. #britneyspears #hilaryduff pic.twitter.com/U3eUsz2ti1

“Look at her body. She gave birth to three children. I wish I would look like this,” one commenter wrote on Hilary’s magazine cover.

Meanwhile, Britney’s Instagram comments are full of people calling her out for “not having dignity as a mom” and “embarrassing her teen sons.”

Aside from the garden-variety slut-shaming, Britney’s followers have also expressed that something feels off given the pattern of her posts and poses.

“She NEEDS help,” one commenter wrote on one of Britney’s posts. “Britney is clearly not ok. I hope she gets some help, and soon,” said another.

Last year in November, the “Toxic” singer was finally freed from her parents’ conservatorship, which controlled her life and financial decisions for 13 years.

Fans have pointed out that Britney’s posts are not a sign of distress but a celebration of sexual liberty. Many fans believe she is reclaiming her less-than-average teenage years.

On the thread drawing the comparison, many people are talking about the fact that one star’s shoot was a professional one, making it “classy” and “tasteful,” and the other’s is just photos in her living room.

Hillary Duff’s is very classy and it was for a photo shoot for a magazine cover –
That’s the difference.

However, one Twitter pointed out that the masses unfairly critiqued Britney even when she was on magazine covers.

People were harsh to Britney even when it was a magazine cover
“That’s too revealing!”
I remember that unfair criticism of Britney

They are okay with other celebrities’ nudity
Like, “it’s tastefully done”,
“Kim K does show often her nudes, not surprised”

Could that have simply been a sign of the times? Or is Britney a special target for extreme scrutiny?

Let us know your thoughts.