Drivers trying to travel to Vancouver from Whistler Thursday morning faced delays after another accident on the Sea to Sky Highway shutdown southbound traffic about 20km north of Squamish. This was the second accident in less than 24 hours to shut down the highway.

Witness reports say two cars were involved in the crash with one ending up flipped over in the ditch. The accident reportedly happened near the same section of highway where a serious crash involving a charter bus shutdown both directions for much of Wednesday.

The first accident happened late Wednesday morning 20km north of Squamish when a charter bus on its way to Whistler and an SUV collided, sending the bus into oncoming traffic and becoming stuck straddling the outside median. Highway 99 was closed in both directions for sometime while crews attended to the accident, and re-opened with single lane alternating traffic around 2 p.m.

Just last week, another crash, this time fatal, caused the highway to shutdown in both directions for several hours.

The highway has seen a considerable amount of snow in recent days, coinciding with the busy travel season ahead of Christmas and New Year’s. There is roughly 39cm of snow on the ground on Highway 99 near Garibaldi, with 4cm falling in the last 12 hours. While the snow stops Thursday morning making way for overcast and sunny breaks, drivers should still be cautious about driving in winter conditions. 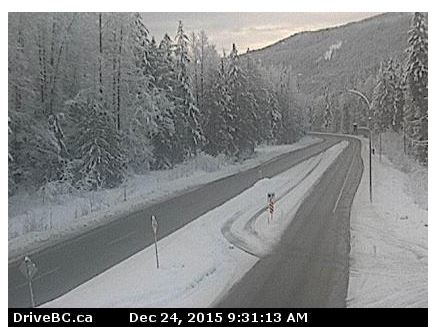 In line with the provincial rules regarding snow tires and chains, all vehicles driving on Highway 99 during fall and winter months must be equipped with winter tires featuring a three-peak mountain and snowflake symbol or the “M+S” mud and snow tire symbol.

If you’re confident enough to drive in winter weather, ICBC says to always check road conditions before heading out, leave more distance between your car and others, slow down, and leave enough time so you don’t have to rush.

Because Vancouver doesn’t often receive much snow, drivers might be rusty when it comes to defensive manuevers like hydroplaning and how to handle black ice. ICBC suggests the following on their winter driving page:

Hydroplaning happens when the tires lose contact with the road surface and float on a film of water. If you find yourself hydroplaning, ease off the accelerator and keep steering in the direction you want to go. Avoid braking.

During the winter, temperatures can change quickly, which can cause unpredictable road conditions. Although the road may look the same, black ice can form unexpectedly and may not be visible.

If you drive over black ice and start to skid, ease off the accelerator, and look and steer smoothly in the direction you want to go. Don’t brake—this will make the situation worse. You may need to repeat this manoeuvre several times until you regain control.

Potholes can be another hazard during cold and wet weather. For all types of winter hazards, remember two key tips: reduce your speed and increase your following distance. The more time you have to react to any hazard the better.