Regular visitors to Vancity Buzz know that I’m a slut for a nice set of wheels. So when the chance came to grope and ogle some of the world’s nicest cars, I knew I had to be front and centre. That being said, if you’ve been to one auto show press conference, you’ve been to them all. The same tours of manufacturer’s areas with the same monotonous speeches by some bureaucrat who’s more comfortable behind a giant slab of teak held high on mirror polished gold and emerald encrusted elephant tusks, than behind a leather wrapped carbon fiber wheel, steering 500 very angry horses.  Geneva, Detroit and Tokyo auto shows may get the big press and concept reveals, but our little coastal backwater managed to lay out a decent, if somewhat overcrowded spread.

Imagine a big automotive family dinner; The Big 2 with their domestic meat and potatoes easily taking up half the table. The import manufacturers provide a wide variety of side dishes with options for even the most militant vegan. Finally, the luxury and sport segment serve up the sweet decadence of a dessert composed entirely of octane and boron steel. With around 400 automotive samples to choose from, it’s easy to get overwhelmed in a hurry.

I chose to dispense with the full meal deal and went a la carte. 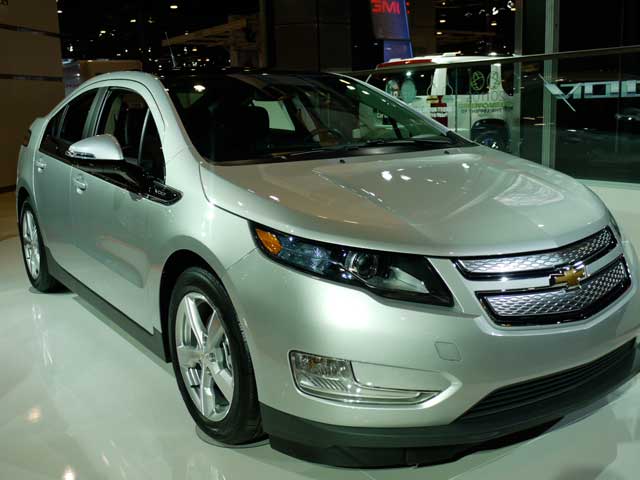 General Motors and Ford dominated the front of the show. Their sub brands littered the  floor with every type of fuel efficient compact, crossover, hybrid people mover under the sun. It was apparent, that after the bailouts, the money from selling shit Cavaliers and Escorts wasn’t flowing as freely. Efficiency and understated refinement were the mantra espoused by the marketers, the fit and finish of the cars reflecting new attempts at innovation and cost effective use of materials. The Volt, Chevy’s over-engineered “Extended Range Electric Vehicle” sat prominently for all to admire, while iPad toting attendants collected email addresses and other personal information from rubberneckers trying to see what “all this electric car stuff was about” Ford’s entries into the EV and efficiency game weren’t much different. The electric Focus 4 door, was inconspicuous among the crowd in contrast to the acid green  Fiesta, looking like it would tear into any import tuner’s weekend racer like a shark through bucket of chum. My personal favorite flavour of Ford was the F-150 Raptor. I’d pay good money for one in flat black with armor and a minigun in the flatbed. 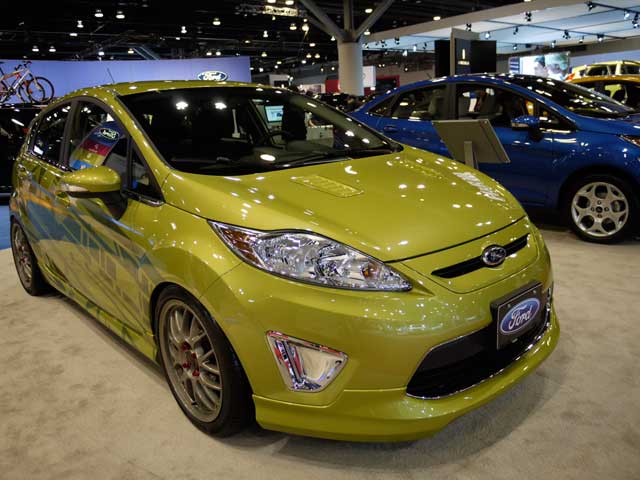 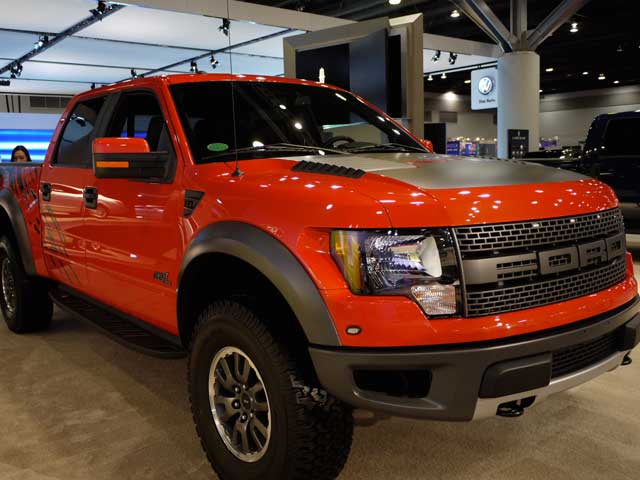 Nissan pushed the Leaf like a pimp and even broke out a guy in a polar bear suit to give hugs to the ladies. Coming in at around 40 grand, the Canadian version will include a special cold weather package designed to withstand the rigors of our often brutal winters. Honda showed off their new Civic SI Concept along with their CRZ Hybrid. Two ways to be sporty and not completely break the bank. Of course, the big draw to the Toyota / Lexus area was the monstrous V10 LFA, a $350,000 Carbon Fiber Reinforced Polymer supercar. For some reason though, it seemed staid, behind the low glass panels blocking any and all access to the vehicle itself. A few steps away, was the ultra compact Scion IQ. Designed to kick the Smart Car’s ass to the curb in price and performance, the tiny Toyota’s highly customizable finish options would definitely give the kids at Daimler a run for their money. Not to be outdone, Chrysler’s new owners, Fiat, presented with customary Italian flair, the North American version of the incredible, 500. Having taken Europe by storm, the  Fiat Cinquecento takes all the best aspects of a subcompact car and packages them in a way that proves irresistible to all but the dead. For real, this is one cool little car. 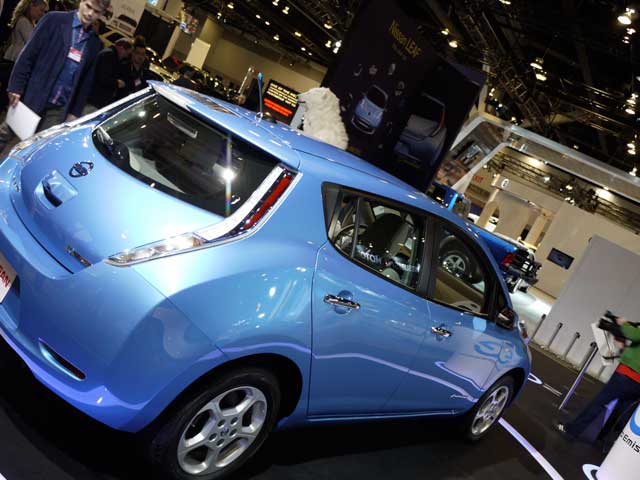 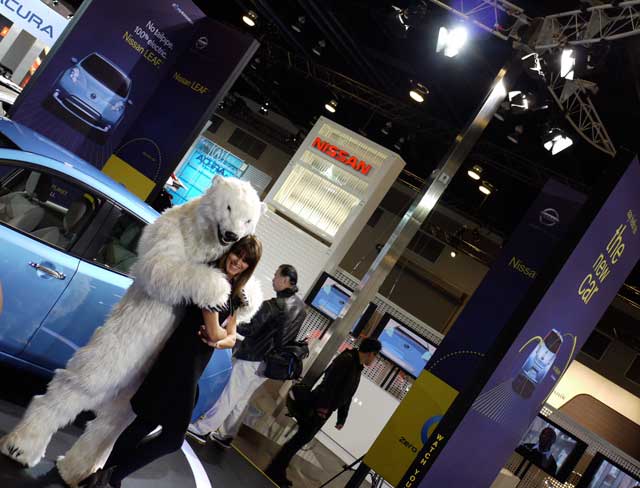 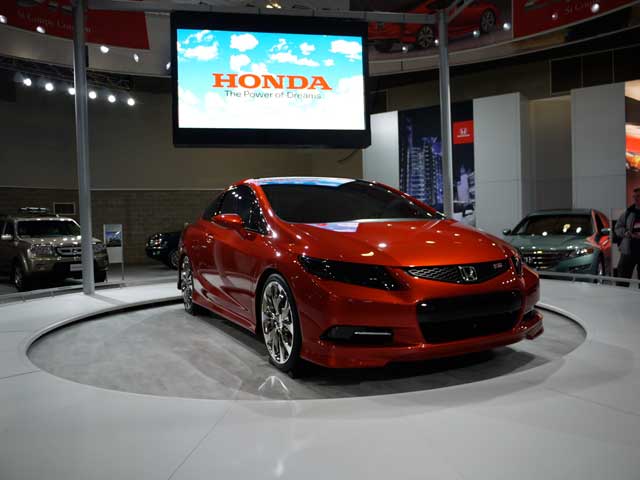 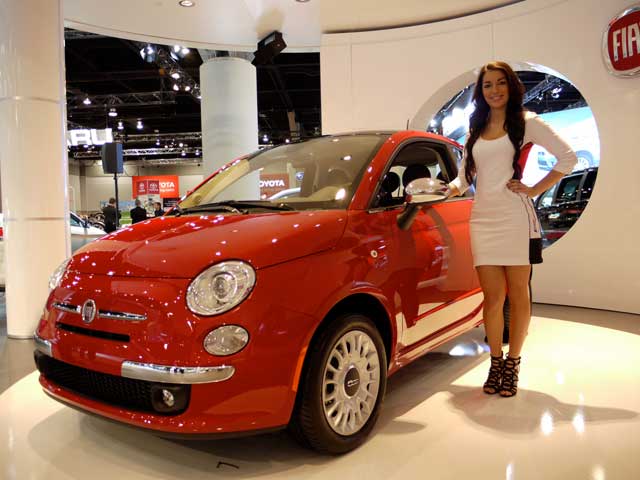 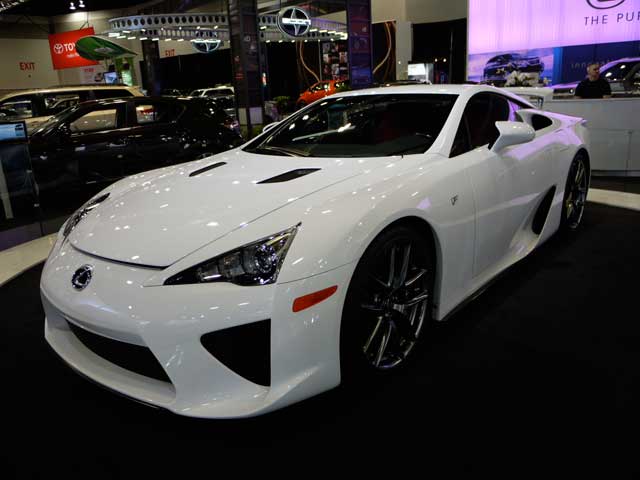 The Germans came armed with their usual array of precision road faring instruments. Both Audi and BMW showcased a portion of their lineup but not the entirety. The focus was primarily on the sporty side. with the unveiling of the new TT and M1. It was unfortunate neither of these manufacturers decided to bring along their take on high performance sustainable transportation like the spectacular E-Tron or Efficient Dynamics Concepts. Sure there were hybrids with interiors that fit like fine calfskin gloves and navigation consoles that could double as a mobile missile command, but really, there’s no shame in dazzling the hell out of a jaded bunch of auto reporters with some high end working prototypes. But, C’est la vie. Volkswagen took the cake for having the most iPads in the show. Literally every member of their crew had one and there were about 20 “interactive configurators” shilling paintjobs and VW branded driving games. Kinda overkill if you ask me. And that goes for the whole show. Sure, I understand a tablet is a great way to demo technology and collect information, but that’s a lot of tablets. 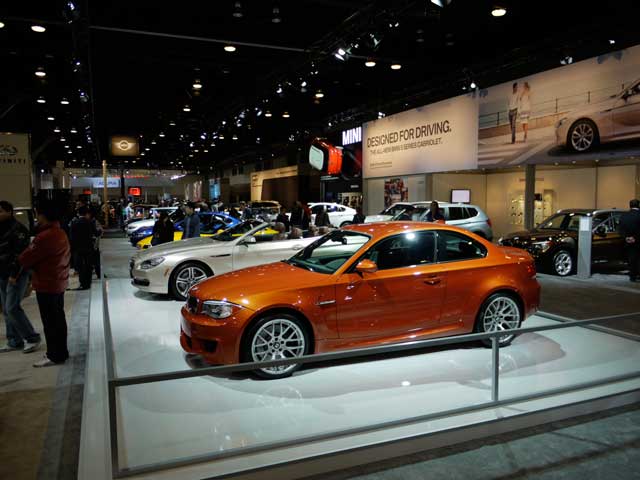 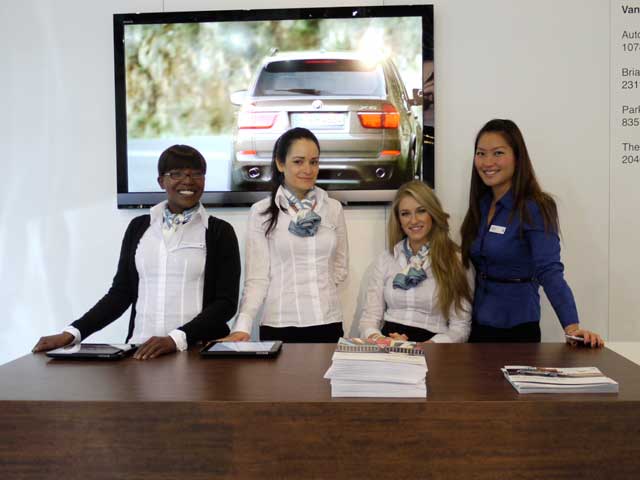 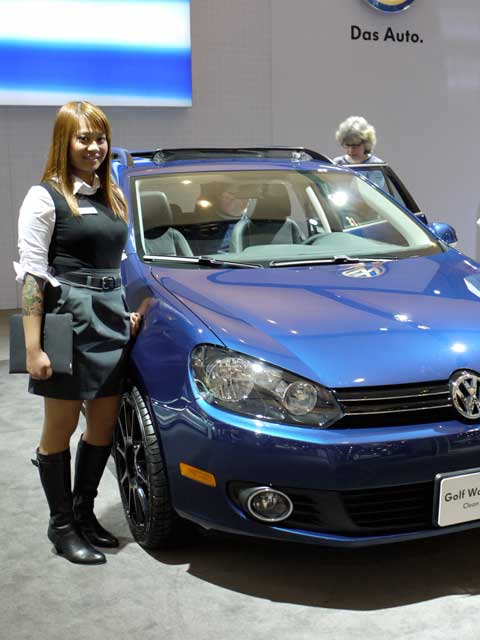 A personal favorite, Volvo, laid out their line of latest models in white. Modest to be sure, but great (and safe as hell) cars like the C30 R Design were a practical blend of performance and affordability. Still, starting at around 35 thousand these Swedes ain’t cheap. Speaking of expensive, the Granddaddy of them all, Mercedes, SLS AMG, the gull winged replacement for the not-as-great-as-advertised SLR McLaren, would cost no less than 200K+. Expect to see a few of these on the road here in Vancity in the not too distant future. It’s a perfect car for the inexperienced driving antics of a high maintenance girlfriend or over-privileged trust fund kid. The designers at Range Rover presented the new Evoque, a sleeker type of SUV designed almost exclusively for the modern soccer MILF. 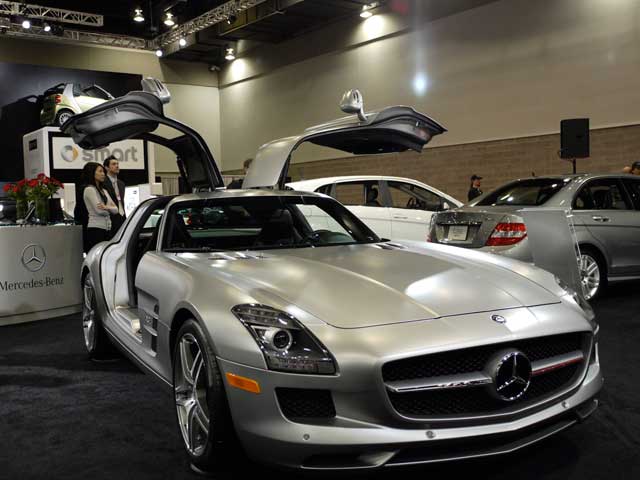 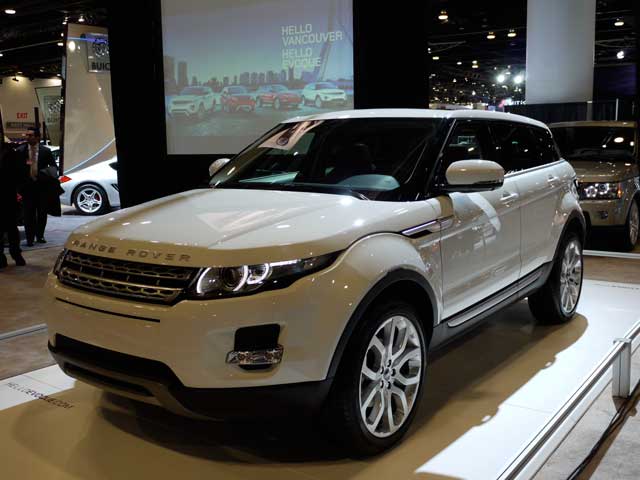 Speaking of kids and proud moms, my homeboys at the UBC Electric Car Club brought their record setting E-Beetle. With a range of up to 500 km and a charge time of only 4 hours, this badboy slays anything by the big manufacturers’ EV divisions. Of course, what it lacks in creature comforts, like multi zone climate control and a back seat, it makes up for with true automotive personality and the honour of being the first electric car to drive across Canada, coast to coast. Using existing infrastructure to juice up, there’s no need for fancy-quick-chargers, here. Just Plug and Play. And yes, BC Hydro was also at the show, featuring their as of yet unavailable to the public iMiev and Smart EV demo fleet cars which would require the user to install a dedicated charging station at home. 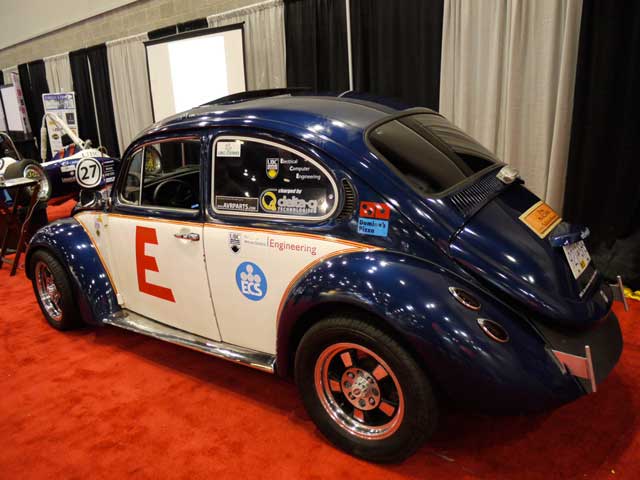 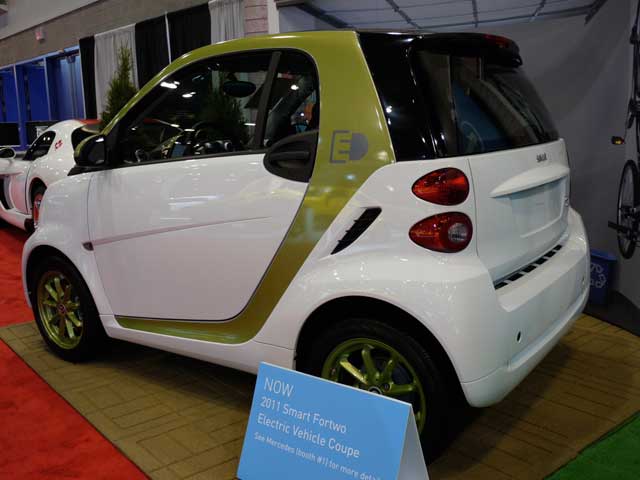 Indeed, there were some super cars, the requisite Lambos, Lotuses, Bentleys and Ferraris together with boutique brands Spyker and Canada’s own HTT Plethora, from Quebec. Magnificent examples of craftsmanship and precision engineering, but because there were no representatives from many of the actual companies, a less than exciting view. Word to the wise for next time; Less Gallardo and more Reventon, capice? Dutch automaker, Spyker, flew down the C8 Aileron.  With an aviation inspired design, this is not a car you simply buy. Every Spyker Aileron is hand built to order. Details, such as the steampunk interior, all gauges and switches on a leather and metal canvas, are emphasized. Even the tips of the exhaust are stamped with the company name. Unfortunately, as with all auto shows, there was a travesty in the room. Perhaps the ugliest car ever to roll on 4 wheels, a Lamborghini Gallardo Spyder with vinyl wrap advertising the upcoming Canadian version of the Famous BullRun luxury car rally. I really like the idea, but strongly recommend the organizer reconsiders the pizza box graphics on his car. 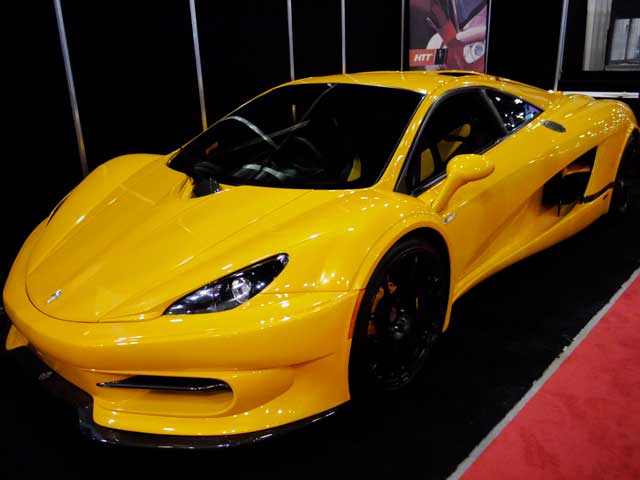 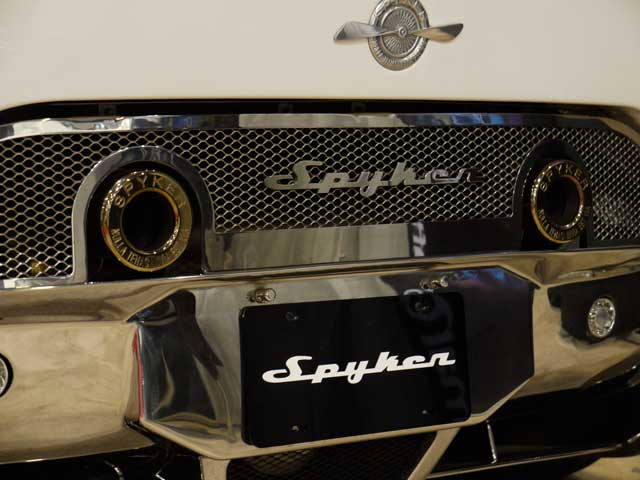 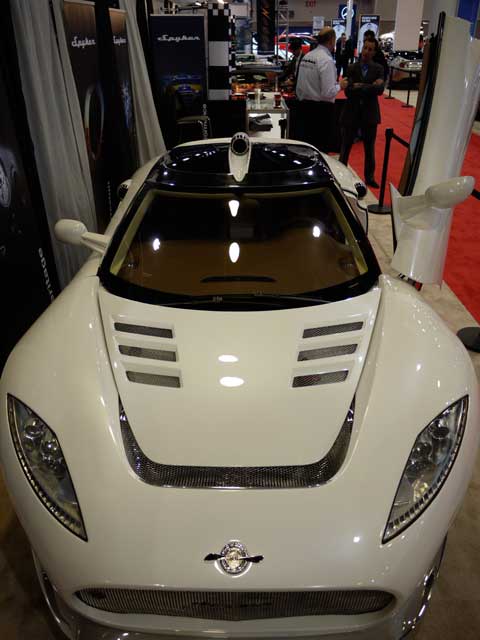 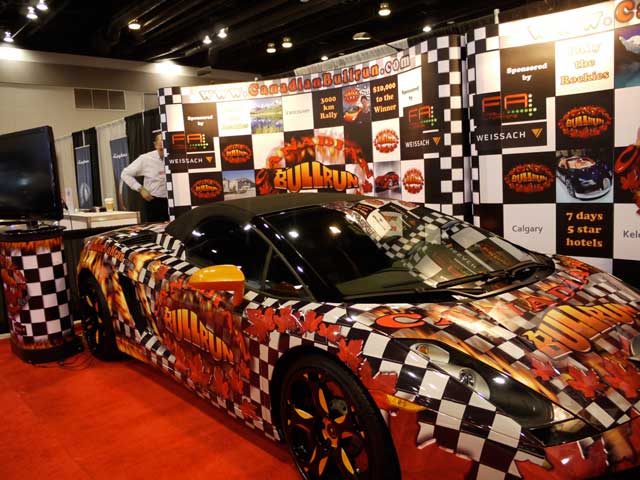 To conclude, I give the Vancouver International Auto Show (in it’s 91st year!) an “E for Effort” The cars, packed like sardines in a can, weren’t as flashy as at the larger auto shows, but there was a wide variety of wheels courtesy of the BC New Car Dealer’s Association.  A special shout out to the unsung heroes of the show; the polishers. These cats were the ones responsible for getting rid of the greasy prints left by the churning masses. They were excellent at their jobs and made the stars of the show look their best. As for the press conference, well, hopefully the major manufacturers will learn from their past mistakes and not keep making crap cars sold for bottom dollar. Also, when making a speech about how great a car company is, it would help being a little enthusiastic and engage the crowd a little more. Perhaps hiring an actor might be the ticket? Overly critical? Not at all. Good times were had by all! But hey, There’s always room for more booth babes. 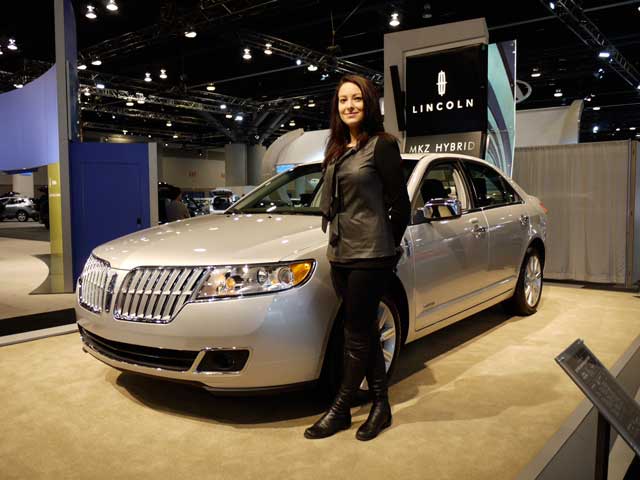 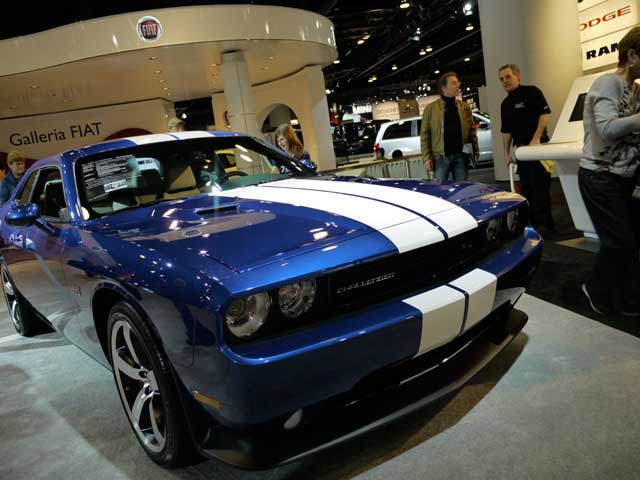 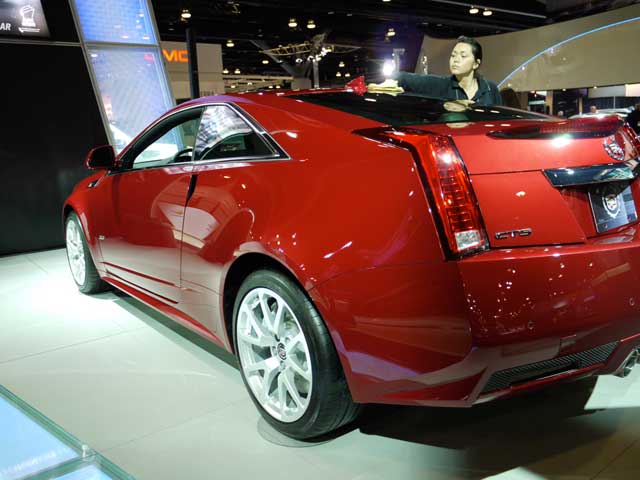