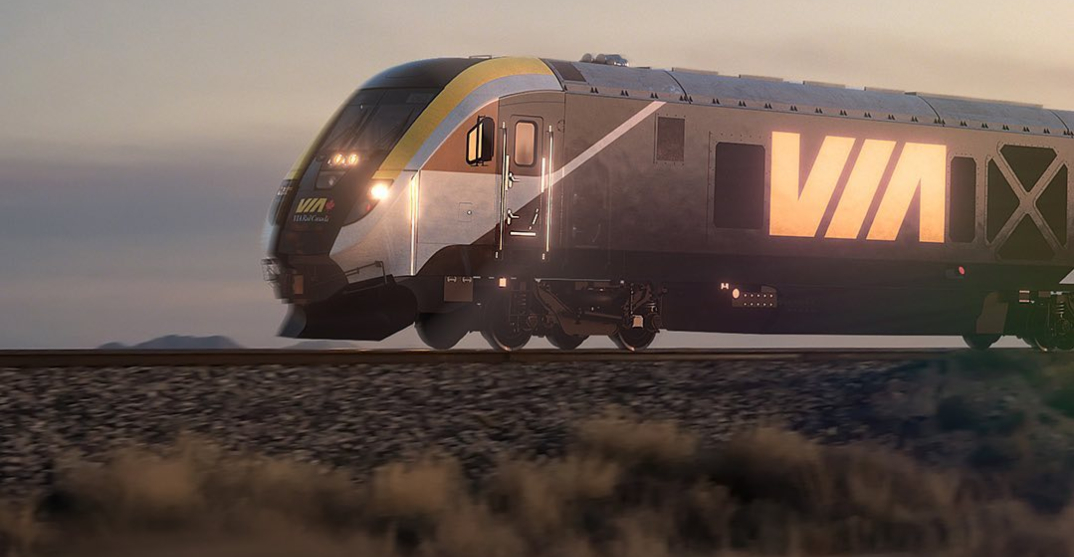 Artistic rendering of VIA Rail's new high-frequency trains for the Toronto-Quebec City corridor. (VIA Rail)

A major investment by the Canadian government into high-frequency rail between Toronto and Quebec City has re-ignited hope for an ultra high-speed bullet train between BC, Seattle and Portland.

The perpetually-electioneering federal Liberals have committed $491 million to a faster VIA Rail link in Ontario, which just so happens to roll through several battleground ridings in two provinces on the eve of what’s expected to be a snap election call this summer.

There’s no such money on the table for any Vancouver-Seattle-Portland bullet train — yet.

But the project is, perhaps surprisingly, buzzing along quite nicely behind the scenes in its early planning stages.

“There’s very much momentum at the political level,” said Greg D’Avignon, president of the Business Council of BC, who also co-chairs the Cascadia Innovation Corridor with former Washington State Governor Christine Gregoire.

On paper, it sounds like a pipe dream – a 350-km/h bullet train capable of whisking a person from Vancouver to Seattle in an hour, with the potential to go as far as Portland. The price tag? An eye-watering USD $42 billion, at least.

Normally, politicians grow wary of expensive projects that stretch over decades, preferring instead to think short-term and on their reelection bids.

But the BC and Washington State governments have put early money on the table to fund feasibility studies that are slowly pushing forward what would be a multi-decade project.

“I think part of it is governments don’t get rewarded for long term thinking anymore,” said D’Avignon.

“So this gives some space for governments that really want to do long-term thinking to do it properly. And we can’t avoid the fact our economies are really connected.”

The pitch from the Cascadia Innovation Corridor is that a high-speed rail link would help the Pacific Northwest unite into a “mega-region” similar to the San Francisco Bay area or the New York-Boston-Washington region on the east coast.

In addition to linking workers in BC, Washington and Oregon in the booming economies of high tech and life sciences, a high-speed rail line would also allow for the identification of “hub cities” along the route that could boost the supply of housing and in turn improve affordability for commuters.

The economic activity generated by the project could reach $355 billion, create 200,000 jobs and reduce greenhouse gas emissions by six million tonnes in the first 40 years, according to a December framework report into the project. The bullet train could pay for itself by 2055, the report said.

The next step is a project planning organization that would put all the governments and private sector together at the table as a single body.

“We’ve had a meeting in the last couple of weeks on this. We expect that by the fall, there’ll be some confirmation of three parties plus the private sector investing in this next stage of feasibility, then determine the viability of moving forward with the project itself,” said D’Avignon.

The BC government has contributed $600,000 to study the idea with Washington State in the past two years, and Premier John Horgan has spoken frequently in public in support of the project.

“High-speed transportation between BC, Washington State, and Oregon presents an enormous potential for job creation, economic growth, and increased tourism and environmental benefits on both sides of the border,” said Economic Recovery Minister Ravi Kahlon, who is handling the file.

“Washington State has led business case studies on the opportunity in 2019 and 2020, both of which BC supported. The province looks forward to being part of the continuing discussions with them and other partners as Washington State works to secure funding to move forward with the project.”

Despite the benefits, in reality, the future of the idea will all come down to money.

BC doesn’t have the cash flow necessary to go it alone with the Americans on a project this size, so the Canadian government would need to come to the table (along with the US federal government) to foot most of the bill as part of infrastructure stimulus.

Horgan’s provincial government already has its big-ticket transportation projects identified: The $2.83 billion Broadway Subway line (with rising pressure to just fund the whole thing straight to the University of BC), and the expansion of SkyTrain to Surrey (with a price tag of at least $3.1 billion, likely much higher).

There’s also the George Massey Tunnel replacement project, which the NDP is wildly unenthusiastic about constructing but is almost out of options on how to stall because it is the largest traffic bottleneck in the region.

Those projects are all reactive to existing pressures and will likely be full to capacity as soon as they are complete.

BC has a history of only investing heavily in transportation in response to a major event like SkyTrain for Expo ’86, or the Sea-to-Sky Highway and Canada Line for the 2010 Winter Olympics.

“I think this actually facilitates the conversation in British Columbia that we’ve been avoiding for probably 20 years,” said D’Avignon. “We get really good at building our transportation infrastructure every 20 years in BC, and it’s always around an event.”

What makes the US bullet train idea different is that it’s a proactive chance to plan transportation, housing and economic growth over decades.