The Heritage Classic has come and gone, and what we are left with is another Canucks loss. But that’s not what I want to focus on today. I’d like to focus on the event itself, which was a whole lot of fun despite the result on the scoreboard.

Leading up to Sunday, as a Canucks fan I will admit, I was excited for the Heritage Classic. The event was shaping up to be a nice reprieve from the monotony of the regular season, which felt needed even more so this year as the Canucks haven’t been playing well for the last two months. When I walked into BC Place, I made sure to check out the ‘arena’ before the seats were filled, and it was impressive. Even though the snow was fake and the roof was closed, it was still an impressive sight to see. It was even more impressive with everyone in their seats, as you could feel the buzz of the fans throughout the majority of the event.

‘Spectators Plaza’ outside of the arena (unfortunately due to transit delays, I was unable to attend) added a nice ‘festival’ atmosphere to the outside area. This festival atmosphere continued in the concourse as you could feel the anticipation of the event from the 55,000 fans that packed BC Place.

It was unfortunate that the roof couldn’t be opened for the game, but it ensured that the ice wasn’t rained on, and the ice appeared to be better than the other Stadium Series games this year. I am sure that it would’ve added to the experience, but the roof being closed didn’t take anything away from the event.

Some of the highlights of the whole event for me were:

-‘Timbits’ hockey on the side rink; These kids were bringing it! I saw kids diving to block shots, finishing their checks (not on purpose) and end to end play. After the first 12 minutes of the actual Canucks game, the Timbits game was the most entertaining hockey in the place.

-The Poutinerie, nothing is more Canadian then hockey and some poutine.

– Although both of them didn’t really come across as band that would be good at this type of event, the musical guests (Tegan and Sara and The Odds) added a nice entertainment factor during the intermissions. 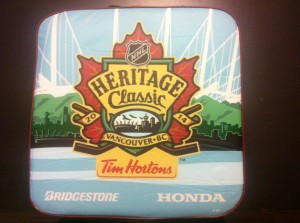 -The seat cushions were a nice touch. It was rather cold in the upper section of BC Place, so having a cushion to separate yourself from the cold plastic seats was a nice thing. Also it was a neat souvenir.

Some of the low-lights of the event were:

-The booing (or Lou-ing) of Eddie Lack. He didn’t choose to start, nor was he the one slighting Luongo. I understand the booing when he was announced before the game, but the moment he hit the ice, we should have been supporting him. There wasn’t a lot of booing going on in my section, as it was filled with quite a few minor hockey teams, but it was very loud from the rest of the stadium. I wouldn’t have found this to be a low-light but since the crowd was booing him on multiple occasions, then cheering for him when he made a few good saves, I found it be a low-light.

-No Toques! I know this is a odd one,but as mentioned before it was rather cold in the upper deck of BC Place and none of the vendors had Heritage Classic toques for sale. I know I would have bought one for the event; and after talking with some people who had bought them before the Heritage Classic, I wasn’t the only one.

In its entirety, the Heritage Classic was a success and it was good to have Vancouver as the focal point of the NHL for a day. Hopefully if there is another Heritage Classic in Vancouver, the Canucks will be able to hold the lead.

I want to thank the folks at Can-Am again for providing me the opportunity to attend this once in a lifetime event. I am glad that I went to the Heritage Classic, and will remember it for a long time. 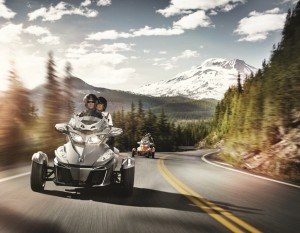 BRP and Can-Am Spyder are official partners of the NHL and throughout the season are bringing special experiences to the Coors Light NHL Stadium Series outdoor games and the Stanley Cup playoffs.
Just as the NHL is delivering open-air experiences to fans through its Outdoor Stadium Series, the Can-Am Spyder is the only vehicle that combines the exhilaration of open-air riding with confidence and control. To learn more about Can-Am Spyder visit them on Facebook (facebook.com/CanAmSpyder) and Twitter (@OfficialSpyder)
To test drive a Can-Am Spyder and learn more about its three-wheel stance and seven automotive technologies, find your local dealerships here: http://can-am.brp.com/spyder/dealer-locator.html