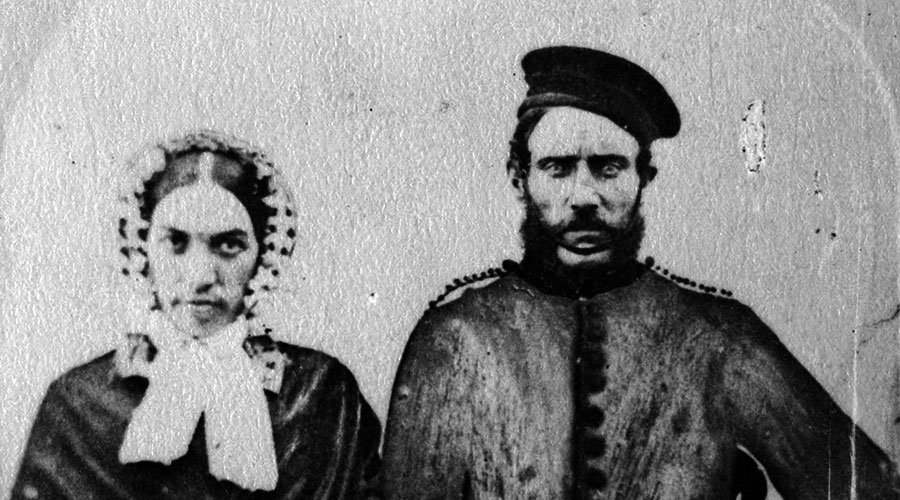 Lynn Valley on the North Shore is generally speaking a pretty quiet place. The trails that run deep into the forest nearby are a haven for dog walkers and hikers. But if you explore the forest are you likely to meet the ghost of a long dead man who was hanged for murder in 1894?

That man is Hugh Lynn.

In 1871, Scotsman John “Jock” Lynn was granted 150 acres of forested land on the North Shore as reward for his military service with the Royal Engineers. Lynn had already settled in the area two years earlier with his wife Mary and children Hugh, Thomas, Janet, Allison, Mary, and Maria. When the Crown granted him the land, his homestead became official. The Lynns had a cottage and vegetable patch, but decided against breeding pigs so as to not attract cougars. 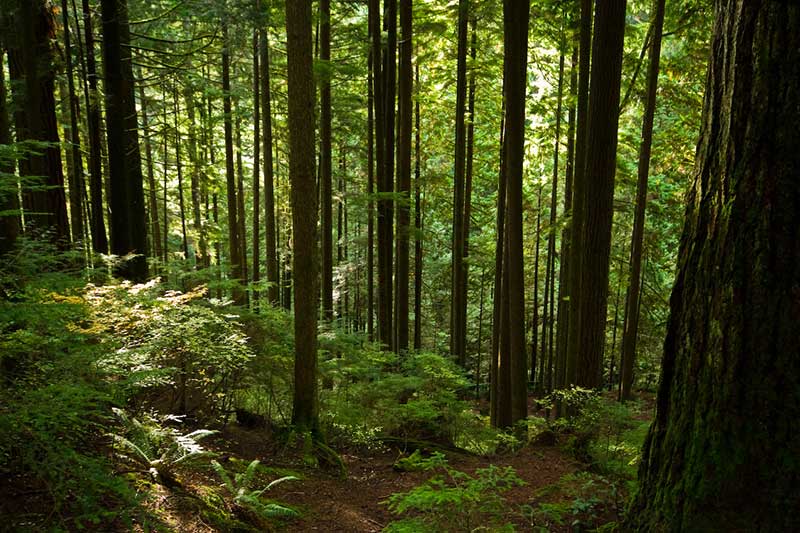 The forested slopes of Lynn Valley on the North Shore. Credit Jeff via Flickr.

John Lynn was a regular commuter to downtown – or Gastown as it was limited to in the 1870s – via a row boat across Burrard Inlet. Apparently this was a journey he mostly took in order to get blind drunk in one of the watering holes on Water Street, before embroiling himself in public slanging matches and street brawls. Legend has it his wife Mary crossed the inlet many nights herself to retrieve her sozzled husband.

Perhaps it was the notoriety he had gained from heavy drinking and fighting on Saturday nights in Gastown that led to the area he settled becoming known as “Lynn Valley.”

Unfortunately for John Lynn, he died of a stroke in 1876 at age 54, leaving Mary to care for their six children – ranging in age from 7 to 17. Although the family had been there for almost eight years, they were still over a mile from their nearest neighbours. 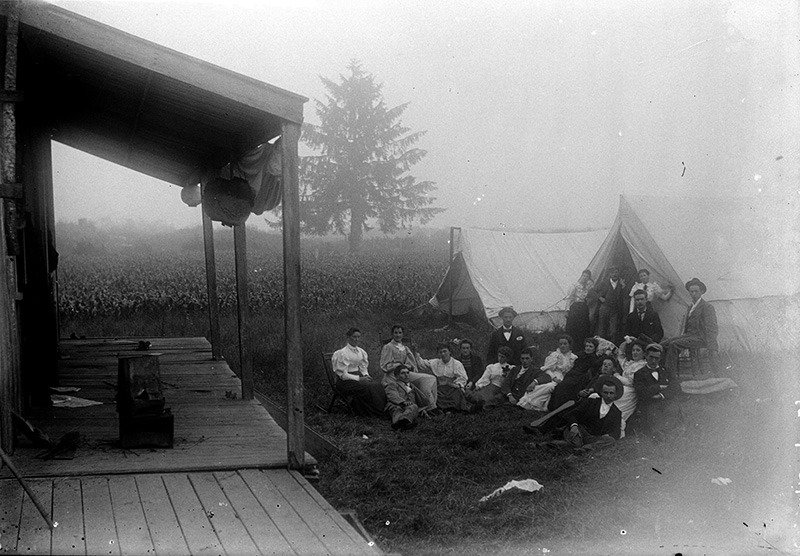 John Lynn’s cottage in 1896, after the family had moved out and now looking a little ramshackle. The cottage became a popular destination for day trippers. Credit City of Vancouver Archives #SGN-3560.

Mary Lynn might have hoped that her eldest child, Hugh, would step up after his father’s passing and take a lead role in managing the home or bringing in some money. Hugh did try his hand at various occupations, from beachcombing to trapping to fishing, but none with any success.

One associate called Hugh “an individual of weak and defective mind … little better than half-witted.” Hugh developed a sideline in selling liquor to local First Nations people, which was illegal at the time. As a result, he often found himself in jail awaiting his mother to bail him out.

Things did take a turn for the better in 1890 when Hugh began a relationship with Jenny Que-Ah-Boketo, a Bella Coola Kimsquit woman, who had a four year-old son named Louis. And any hopes Mary Lynn might have had for her son to settle down into a responsible life with his new family would be well and truly dashed following a sequence of events that took place on Savary Island.

Hugh, Jenny, and now seven year-old Louis decided to visit the island, located about 80 miles up the coast from Vancouver, in October 1893. The island was home to an elderly rancher named Jack Green, rumoured to be in possession of significant wealth and perhaps hidden treasure.

It’s not known whether Hugh was aware of Green’s reputed wealth beforehand or came upon this knowledge once he arrived there. Regardless, after gaining Green’s trust in a boozy night at a nearby bar, Hugh shot and killed both Green and Green’s employee, Thomas Taylor, before ransacking and robbing Green’s store. 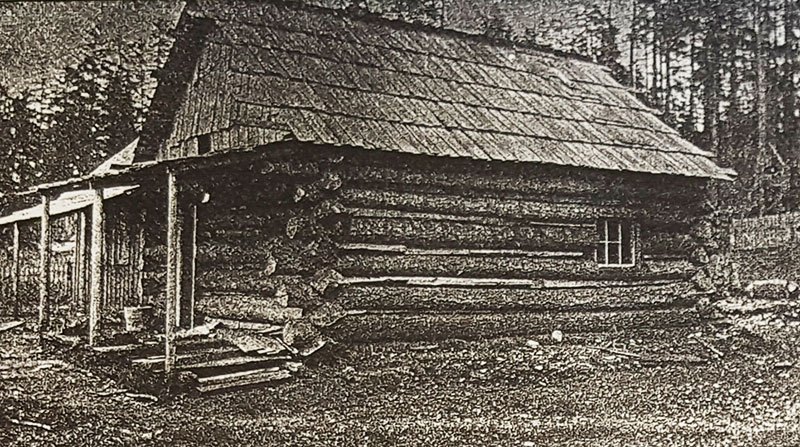 A photograph of Jack Green’s cabin, taken around the time of the murder. It was the first permanent structure on Savary Island.

Hugh arranged the bodies to try and give the impression the two victims had shot each other in a quarrel. He placed shotguns in their hands to make the ruse credible, although their bullet wounds were from a rifle and he left both shotguns fully loaded. When the police arrived it did not take them long to realize they were dealing with a murder.

Hugh fled the scene with Jenny, Louis, and a skiff full of stolen goods; but not before returning to the bar where he had befriended Green, to collect six bottles of whiskey on Green’s account. The three travelled first to Port Townsend, then to Shaw Island in the San Juan Islands. The police linked Hugh to the crime via his suspicious whiskey purchase and after six months of following leads up and down the coast, they finally tracked him down to a remote ranch on Shaw Island.

Hugh was arrested for murder and tried in Vancouver in July, 1894. Both Jenny and, remarkably, seven year-old Louis agreed to testify in court against him. According to the Victoria Daily Colonist, young Louis was apparently fluent in “English, Chinook, Siwash, and Italian” (the latter courtesy of his mother’s partner before Hugh, an Italian fisherman who had passed away). Bravely, Louis took the stand and testified to having seen Hugh shoot the men. His mother also testified against Hugh, claiming that he had threatened to kill both her and Louis if they ever spoke of what had happened on Savary Island.

The case against Hugh was made beyond all doubt when police sneaked a detective into his cell posing as a “hobo.” The man was a Cockney from east London and able to convince Hugh he was a harmless unfortunate whom Hugh could trust. Hugh recounted the entire saga to the detective, admitting fully to the double murder and even informing him where he’d hidden the remaining stolen goods – which the police then promptly located. 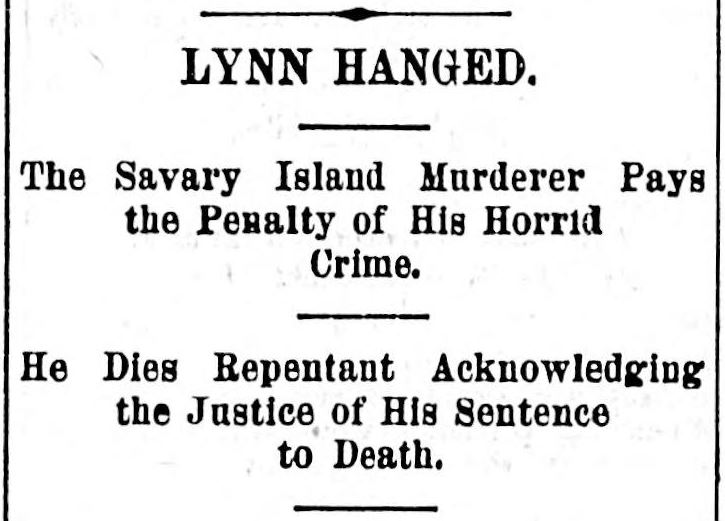 The jury found Hugh Lynn guilty of murder and he was sentenced to execution. Scarcely a month after the trial, on August 24, 1894, Hugh Lynn was sent to the gallows at the jailhouse in New Westminster.

Perhaps Hugh Lynn’s spirit was laid to rest the same day he hanged. Perhaps it still wanders the streets of New Westminster. Or perhaps it decided to go home. Back to the forest of Lynn Valley. So keep an eye out next time you’re on a walk on the trails there, and maybe you’ll see old Hugh Lynn for yourself.

With thanks to Judy Koren and the District of North Vancouver Archives.