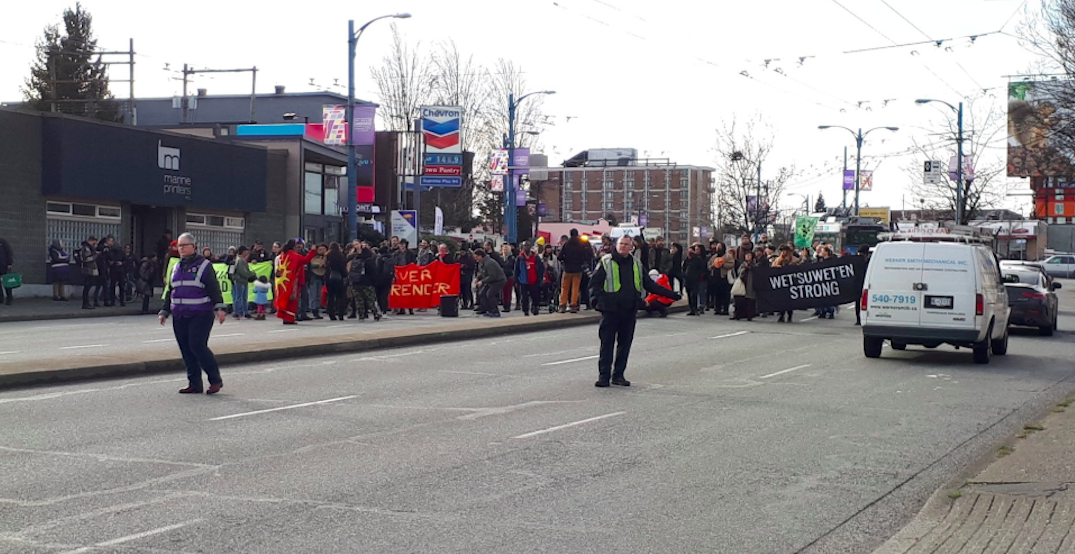 Traffic is blocked in all directions at Hastings Street and Clark Drive due to an anti-pipeline demonstration.

The rally comes after police in Ontario moved in on a Mohawk blockade adjacent to a railway in Tyendinaga (outside Belleville) Monday morning to clear protestors supporting the Wet’suwet’en hereditary chiefs in BC.

On Facebook, organizers of the event said they would be meeting at 380 East Hastings Street.

“This morning Ontario Provincial Police began an assault on the Tyendinaga Mohawk who have been acting in solidarity with the Wet’suwet’en Hereditary chiefs for nearly three weeks,” the event’s description reads. “We are hitting the streets today to express our ongoing support of Tyendinaga and Wet’suwet’en as both face the violence of the colonial state.”

The event comes after the Mohawks of Tyendinaga and other supporters set up a barricade on February 6 next to the rail tracks in solidarity with the Wet’suwet’en hereditary chiefs to stop construction of the Coastal GasLink pipeline in BC.

#VanTraffic: The intersection of Clark Drive and East Hastings Street is currently closed. Traffic is blocked in both directions. Drivers are advised to consider alternate route. pic.twitter.com/I57wTi4jWO

Vancouver Police are asking drivers to avoid the area and plan an alternate route.

With files from Eric Zimmer and Clarrie Feinstein