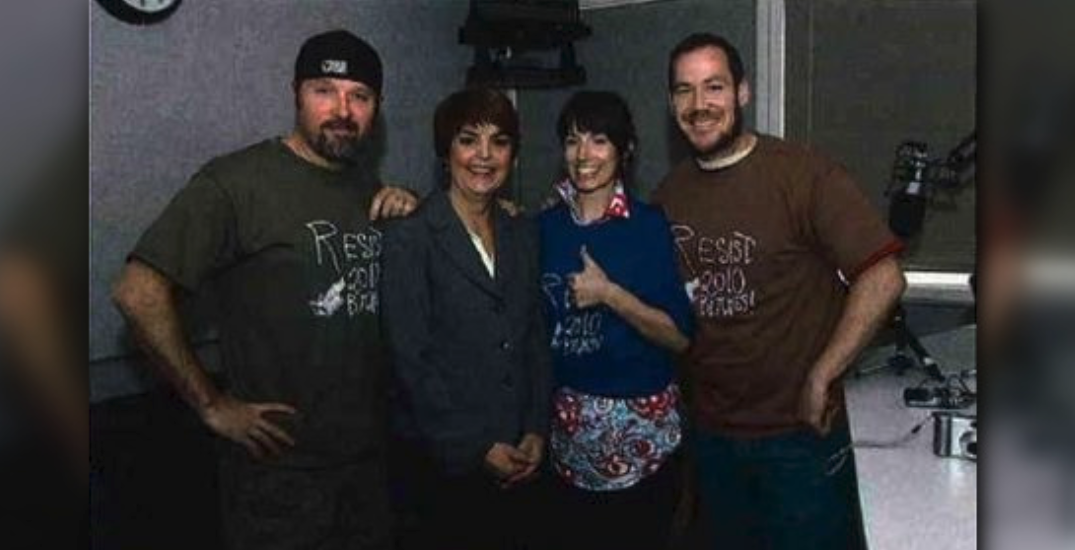 “We kinda did some crazy stuff,” recalls Charis Hogg about a decade-old photograph with now-BC Finance Minister Carole James that erupted in controversy days before the 2009 BC provincial election.

A jokester for certain, the 96.9 JACK FM morning show co-host is more known for her good-spirited pranks than being in the throes of partisan politics. However, with Canadian politicians exponentially more photographed, more online, and more vulnerable to criticism in 2020, the media coverage around this episode warrants retrospect.

In the photo, Charis  — who worked for CFOX 99.3 FM at the time — poses with a thumbs-up beside then-BC NDP leader (and current BC Minister of Finance), Carole James. They are flanked by Charis’ morning show co-hosts, Jeff O’Neil and Captain Scotty.

The photo was taken after James’ appearance on the Jeff O’Neil Show, a few days before the 2009 election. The outrage stems from the three CFOX hosts wearing T-shirts emblazoned with the words “RESIST 2010 BITCHES!” which was copied from a graffitied alley in Captain Scotty’s neighbourhood. 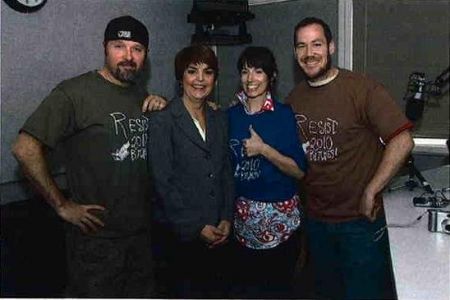 At the time, the impending 2010 Winter Olympics in Vancouver triggered local angst and anger around its fiscal impacts and the huge benefit to a small band of developers. However, with large public support for the Olympics, it was not politically viable to oppose the event.

The photo was posted on the BC NDP’s Flickr page and immediately became political ammunition for the governing BC Liberal Party. The crux of the controversy was James’ seeming endorsement of the radio hosts ironically wearing T-shirts with crude language and opposition to the Olympics. Although, in the radio interview itself, James and the CFOX hosts espoused support for the Games. Nevertheless, the media jumped at the opportunity for outrage.

On an evening newscast, Global BC’s Brian Coxford dramatically grilled James: “You want to be premier. What do you think you’re telling the world when you pose with people who have that on their T-shirts?”

To her credit, the leader of the BC NDP was unapologetic. She emphasized her support for the Olympics, the irreverent nature of the Jeff O’Neil Show, and the ironic humour of those T-shirts. Still, Brian Coxford, Steve Darling, Lynn Colliar, and other media personalities all found themselves saying the word “bitches” on television – a bizarre sequence of events that Charis now reminisces on as “magic.”

The actual substance of James’ CFOX interview received no coverage.

In an era when “snowflake” millennials are implicated as the purveyors of outrage culture, this incident is a reminder that the Gen-X and Boomer media have always been just as guilty.

With 10 years of hindsight, much more serious questions of political judgement surround the premier of Ontario and a prime ministerial candidate who have separately been photographed with white nationalists. Even the PM’s wife sparked controversy when she was photographed with a man convicted of attempted murder, Jaspal Atwal, who was somehow invited by the prime minister’s office to attend two events hosted by the Canadian High Commissioner in India.

On the stump, Canadian politicians will find themselves in precarious positions, perhaps even with unsavoury characters, providing fodder for their political opponents. However, it is the media’s responsibility to exercise fair discretion in their reporting of such incidents.

Have a listen to the full podcast episode with 96.9 JACK FM’s Charis Hogg: