Back in November of 2009 we profiled Hardihood Clothing and gave away approximately $800 worth of swag to our readers. At the time they had no women’s line, but the demand was there. Case in point, many of our entrants were female and now women will get what they want, a dedicated line from the folks over at Hardihood Clothing.

For the first time ever, Hardihood Clothing is releasing a women’s line. Playing with the concept of Tibetan Buddhist influences, the collection has fantastic fit, great colours, and will be unfolding this spring.

“At Hardihood we are always pushing the boundaries to be unique,” says Creative Director Angus Wong. “We’ve had so many requests to do women’s clothing and now that we’ve had so much success with our men’s line, we are ready to tackle this new challenge and expand the Hardihood family.”

The designs embody Hardihood Clothing’s self-assured maxim, I Am What You Are Not. “The Hardihood woman is sassy and strong – she’s the type that can change your mind without saying a word,” says Angus. This boldness is on display with the cheeky Kiss Tee ($66).

“My favourite item this season has to be the Mandala Tee,” says Angus. “It’s a Tibetan term that means ‘essence’ or ‘completion’ and I wanted to reflect karma by using the geometry of a circle.” Very apropos given that every Hardihood design means a lot more than initially meets the eye. 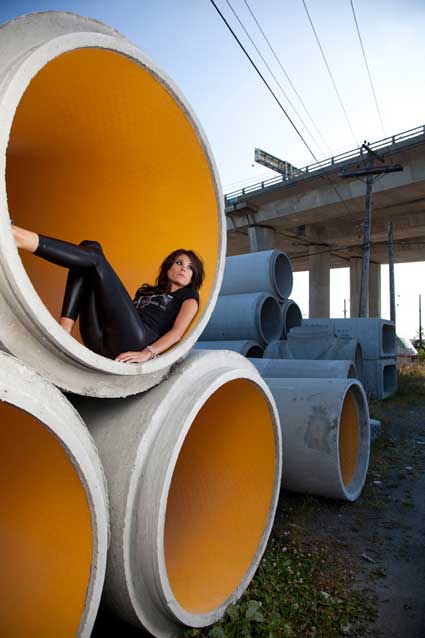 We love the Peacock Tee ($66). “According to Indian culture, peacock feathers are the enemy of poisonous creatures, able to convert primary poisons like ignorance, desire, and aversion into the nectar of wisdom,” says Angus. “It symbolizes women being able to deflect poisons of everyday life and thrive in the face of a challenge.”

Look for the City Tee ($59)! “Vancouver is one of the best places in the world to live,” says Angus. “This shirt is all about paying homage to the city that moulded me into who I am today!” Want some other options? Try the Familia Tee, Star U Tee, and Chrys V Tee.