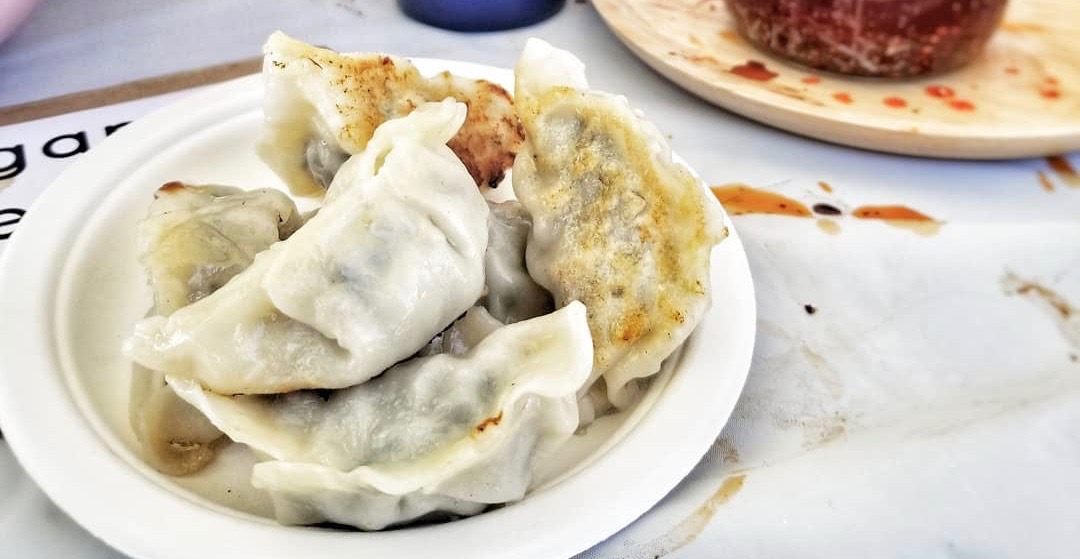 It can cure the common cold, bring a smile to someone’s face, and warm the soul. It has the power to bring people from different backgrounds together at a dinner table.

It’s a common language that everyone can speak regardless of the language barriers.

Wendy Au Yeung knows this. It’s one of the core values of Happy Woman Kitchen, the community initiative that she started in 2018.

The name came about when Au Yeung’s friends called a brand of spicy sauce “sad man spicy sauce” because the logo had a morose-looking face.

Au Yeung decided to make her own spicy sauce and call it “Happy Woman Spicy Sauce” and stick her own smiling face on it as a logo.

Happy Woman Kitchen first launched at the Strathcona Artisan Market where Au Yeung partnered up with her neighbour, a Chinese grandma affectionately dubbed Kong Tai, to sell her dumplings as well as Au Yeung’s own homemade goods like mochi cakes.

Au Yeung isn’t professionally trained; she just loves cooking and eating food, and honed her skills by living with a lot of people over the years and trying out new things.

Now at age 26, Au Yeung is hoping to turn this initiative into a place where a sense of community can be nurtured and women can feel empowered.

A source of empowerment for women

Au Yeung hopes that Happy Woman Kitchen can be a source of joy and meaning for the women she works with, which is why she helps marginalized women use and share their culinary talents as a source of economic and community empowerment.

When asked why food, in particular, empowers women, Au Yeung admits that part of it is due to social constructs.

“That’s what a lot of women do,” she said. “Some people were born to love it like me, some [women cook] out of obligation [towards their] family. So I think for better or for worse, it’s a skill that a lot of women have.”

But ultimately, she says that “food speaks really deep to who we are.”

She says that much of the initiative sprouted out of sharing meals and building intergenerational and cross cultural bonds.

“With Kong Tai, we became friends over organizing issues around Chinatown and her feeding me is out of her generosity and love for me.” Au Yeung said. And with Vella, it was “sitting on the floor in Vella’s home with her kids and trying to say ‘thank you’ in Kurdish.”

In the early pop-ups, the money that was generated from the sales went to Kong Tai, with Vella receiving an honorarium for helping out. Au Yeung says that the revenue will go back to the people.

“The hope for Happy Woman Kitchen is for it to have a structure to help people achieve what they want.” She said.

For marginalized women, especially, Au Yeung says “there’s a certain narrative” where seniors may feel like they have nothing to offer and new immigrants and refugees may feel like their culture won’t be accepted in the new environment.

“There are just many other narratives we all live by that are not true.”

She hopes that food will act as agents of hope for women to be able to live into something more than what they have imagined.

A catalyst for reconciliation

Despite not sharing the same language – Kong Tai speaks Cantonese and Vella speaks English and Kurdish – Au Yeung sees a spark between the two that transcends beyond the scope of language.

“We know people not just by what we tell ourselves but in spending time together, working alongside with each other,” Au Yeung said. “I think it’s beautiful.”

She points out how historically, rifts are often started because there is a lack of understanding.

“The first foot forward is always suspicion or rejection.” She said. “It’s easy for us to buy in the narrative of exclusion or otherness, [but] I really think that deep down in all of us, there’s a part that is able to connect over differences and want to celebrate diversity.”

This September, Happy Woman Kitchen will be at the Strathcona Artisan Market for its last function of the year which will be your last chance to try out their tasty treats.

In addition to Au Yeung’s food, Kong Tai will be there with her famous dumplings, and Vella will also be selling Syrian food.

“I think [food] has a lot of potential for being a catalyst for reconciliation,” Au Yeung said. “And I think that’s kind of how I want my life to be like – be a bridge-builder, like an agent of reconciliation.”

When: September 7 from 10 am to 7 pm
Where: 431 Princess Avenue, Vancouver
Price: Free entry