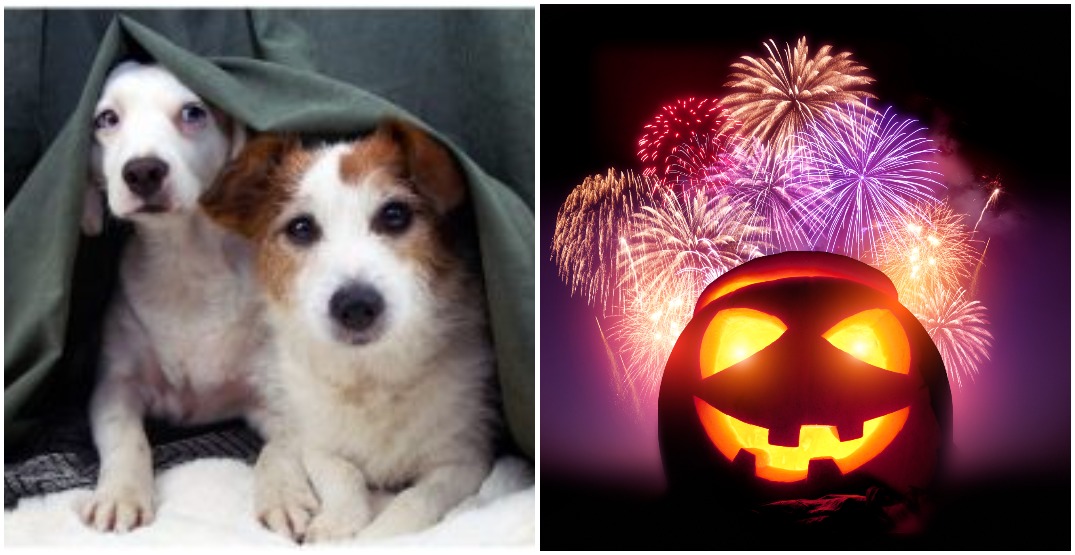 The leaves are falling, pumpkin-spice-flavoured everything is back on the menu, and Halloween is just around the corner.

This time of year can be fun for us humans, but the spooky festivities can be terrifying for animals that have no idea what’s going on.

Loud fireworks, people dressed up in costumes, Halloween candy, and pumpkins can all expose animals to danger — so we’ve gathered some tips from the BC SPCA and the Fur Bearers on how to keep animals safe during the Halloween season.

The BC SPCA has said on nights when there are fireworks, the calls pour in about pets running away because they are so scared and frantic from the loud noises, so it recommends keeping your pets inside.

The SPCA suggests taking your pet outside for its business before it gets dark, and keeping pee pads in the home, as well as being mindful when you need to open the door because cats and dogs can burst out of the home quickly.

If you need to take your pet outside when it’s dark, the SPCA warns you to make sure your pet is securely harnessed and to hold on tight — even if you are in your backyard.

A quiet, private room would be a great area for your pet to stay comfortable, and to prevent it from getting scared from trick-or-treaters at the door.

In addition, the SPCA recommends having two forms of ID for your pet in case they do go missing, such as a collar with tags, ear tattoo, and a microchip with your contact information.

Candles can be poisonous to pets

The SPCA is reminding us that candles made from paraffin wax, release synthetic oils and fragrances, or use a lead wick can be toxic to animals. Plus, animals can be susceptible to burns from the wax or the flames.

It recommends using candles that are based with coconut, vegetable, or soy wax, have an unbleached, 100% cotton wick, and keeping them out of reach of your pets.

Conservation officers are constantly reminding residents not to leave out wildlife attractants for our furry residents, and pumpkins are no exception.

The Fur Bearers says it’s best to bring those organic decorations inside for the evening, especially if you live in areas with bears, raccoons, coyotes, and other animals. The group suggests considering putting those decorations in a window temporarily instead.

As well, the Toronto Wildlife Centre has said before, it has heard suggestions that some people use bleach to preserve jack-o-lanterns, which can be fatal to all animals if that bleach is ingested. So, it suggests preserving a pumpkin using vinegar and water instead.

Suggestions have been made to use bleach to preserve jack-o-lanterns this #Halloween. Bleach is very harmful to wildlife who may feed on them, and can be fatal if ingested! To safely preserve your pumpkin, instead use a natural solution of 1 part vinegar to 10 parts water. pic.twitter.com/y9muE1tsXP

Chocolate is toxic for pets as it contains caffeine and theobromine, which dogs and cats can not metabolize.

The artificial sweetener xylitol is harmful to dogs and can cause liver damage. It is found in candy, mints, and gum.

Also, be careful not to leave small pieces of candy out because they can be a choking hazard for animals.

You can still treat your furry family member over Halloween by getting them goodies from a dog bakery or pet supply store instead!

Watch out for any litter on the ground outside as well. The Fur Bearers say if birds or animals take a bite out of any wrappers or bits of candy, it can cause damage to their sensitive digestive systems.

While many of us enjoy pumpkin spice, the SPCA warns there are ingredients that can be toxic to pets if ingested, so it’s best to keep those foods and drinks away from animals.

While it’s fun for kids, and kids at heart, to dress up, the SPCA says putting your pet in a costume is not a good idea because it inhibits the animal’s ability to move around and communicate through body language (like wagging a tail) and can also cause them to overheat.

Keep your eyes on the road

While it’s common sense to keep your eyes on the road while you’re behind the wheel, make sure to be extra alert during Halloween and if there are fireworks going off, children and animals could get spooked and run out on the road scared.