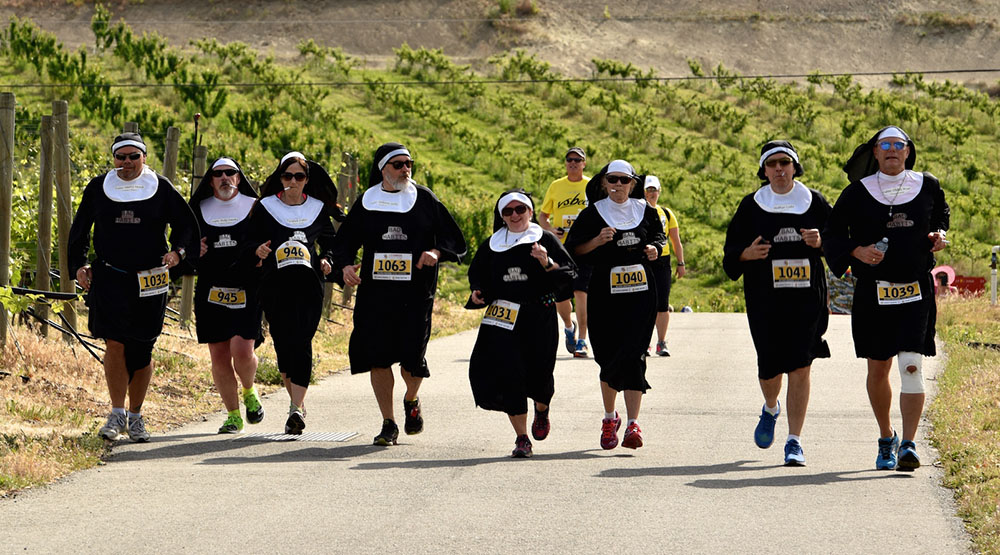 Costumes are encouraged at the Half-Corked Marathon (Kieran Frey)

OLIVER, BRITISH COLUMBIA – After seven editions, the Half-Corked Marathon has become so popular that more than 4,000 people apply for the approximately 1,000 spots available to participate each year.

A lottery draw determines who will receive the opportunity to pay $165 to make their way from vineyard to vineyard, where winemakers pour an ounce or so of their favourite bottles to the runners.

The race course spreads out the vineyard stops, so the runners never have to go more than a couple of kilometres between tastings. The point of the event is to sip at every station, get to know the winemakers and other participants, and hopefully share the memory of the experience once you’ve crossed the finish line. 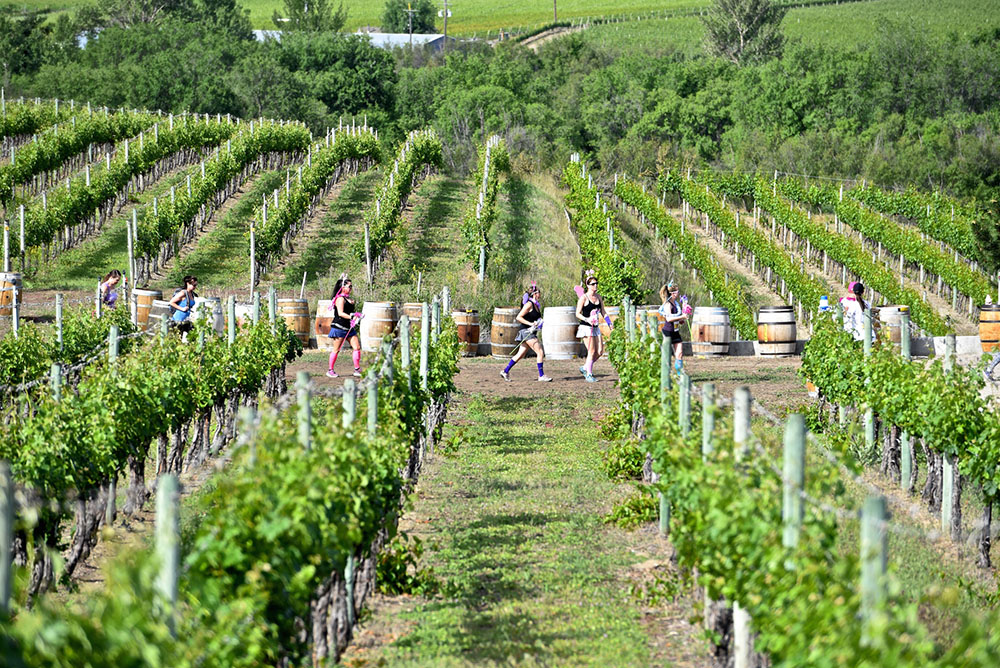 Tony Munday, executive director of the Oliver-Osoyoos Winery Association, was on a high after the 2016 race wrapped up in May.

“It was a near-flawless event and that just makes you feel so good, and keeps the adrenaline going,” Munday, who organized the race, said after receiving praise from participants for how well the course was laid out.

The race brought about 3,000 people — including runners, onlookers, and media — into the sparsely populated area near Lake Okanagan.

Each year the race’s route directs participants to about one dozen wineries and ends in a park where more wineries are present, pouring from booths as the post-race party begins.

“The Half-Corked is a beast,” says Derek Uhlemann of Covert Farms, who also helps to organize the half-marathon. “This year’s race will be busier for local businesses than the May long weekend. I think it’s been a great initiative because it adds value to the area. I want the people who are coming to the Okanagan to be spending their money in my community and this event helps that happen.” 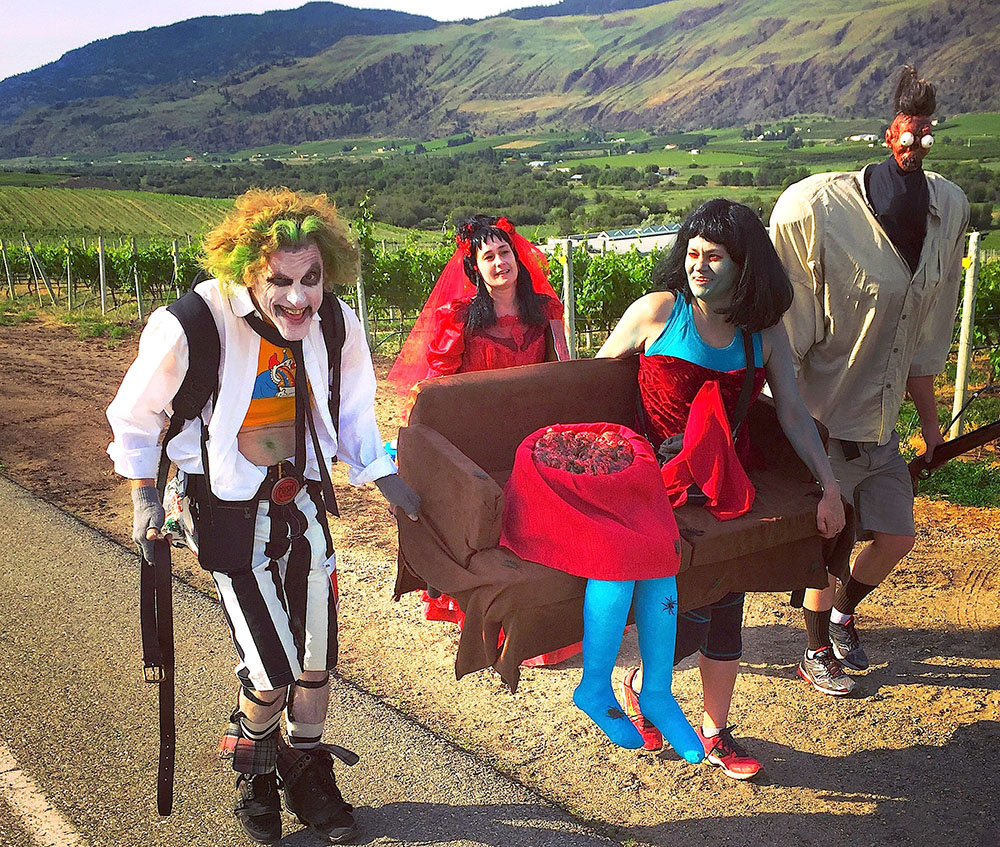 Lilija Berngards travelled five hours by car from Vancouver to don a costume resembling a Beetlejuice character, whose severed body occupies two ends of a couch. She was joined by three friends, each wearing campy outfits from the classic Tim Burton dark comedy. Their creative attire and funny antics won them many fans along the Half-Corked Marathon route, and one of the prizes for best costume.

“It took us about a month to put the costumes together. We started thinking about it back on Halloween,” Bernards says.

One of the most captivating costumes for 2016 was created by Terrie Faulkner and her husband, Jason Broome, who designed an outfit themed on the film Up. Faulkner was decked in balloons and a suit, while Broome wore a Boy Scout’s uniform to resemble the character of Russell in the much-loved Disney movie from 2009.

“Every year we try to do something that is hard to run in and that we think will make an impression,” says Faulkner, who has participated in the run every year since it started. She says the changes in the race and the level of participation have been remarkable since the first edition. 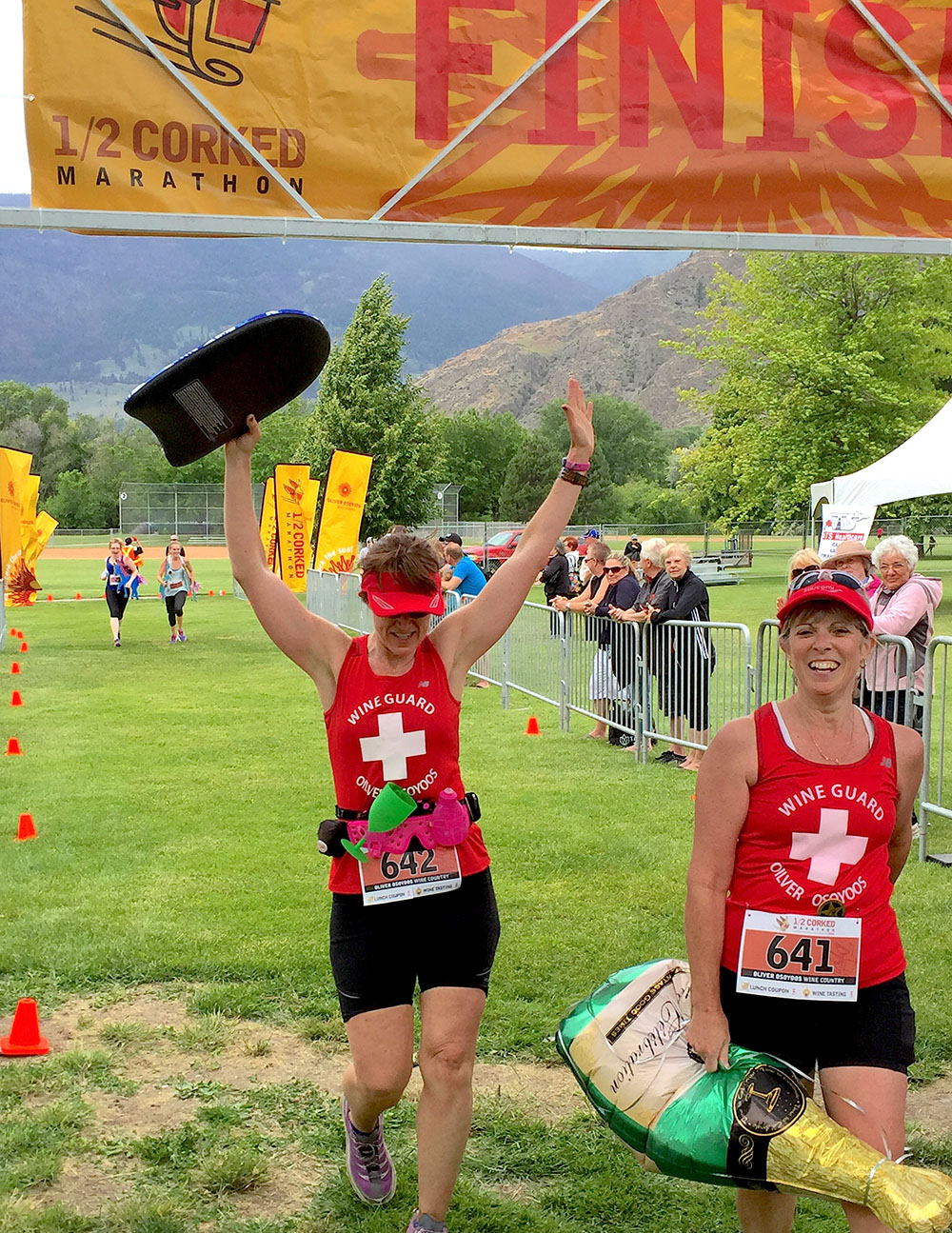 Crossing the finish line at the Half-Corked Marathon (Adrian Brijbassi)

More costumes, fewer hills and more fine-tuned organizing have turned the race into a delight and a cultural event that accomplishes its goal of raising awareness of the Oliver-Osoyoos wine region and bringing an economic lift during a slower time of year for tourism.

What makes the Half-Corked Marathon so appealing is how the runners embrace the idea of a laid-back race. Despite being avid distance runners, Faulkner and Broome embrace the easygoing spirit of this race, where people pay more attention to the number of ounces they drink than how fast they complete the course.

Prior to Saturday, I had never run anything longer than a five-kilometre race and was dreading not being able to finish this event, but it turned out to be more of a fast walk or a slow jog than a challenging contest.

After the three and a half hours it took me to complete the course, I didn’t feel exhausted — a condition no doubt helped by the 15 ounces of wine, plus tasty food, I consumed on the route.

“It’s meant to be a fun event and it succeeds because the people come out here ready to enjoy themselves, not see how fast they can go,” Munday says. “You may still see someone looking to beat his best time, but that’s really not the point of this event.”

Getting there: You can fly into Penticton airport north of Oliver and Osoyoos and drive one hour to the area, or drive five hours east from Vancouver along Highway 3.

Tickets and registration: To apply for the lottery for tickets to run in the race, you need to fill out the application form on the website. The 2017 form will be available in the fall. The cost to participate in the race is around $165.

Food and wine: Runners can purchase a ticket to the Primavera dinner on the eve of the race. The dinner is held at a participating winery and served family style on a long table. If you don’t want to run, but want to have fun or cheer on participants, you can purchase a $20 ticket that gives you access to the picnic grounds at the finish line, where wineries pour tasting-size portions from 11 am to 4 pm.

Where to stay: The Spirit Ridge Vineyard Resort and Spa (1200 Rancher Creek Road, Osoyoos) has North America’s only aboriginal-owned winery (Nk’Mip Cellars) on its premises, as well as a cultural centre to learn more about the Osoyoos Indian Band. Nightly rates for a weekend stay in June start at $169, according to the resort’s website.