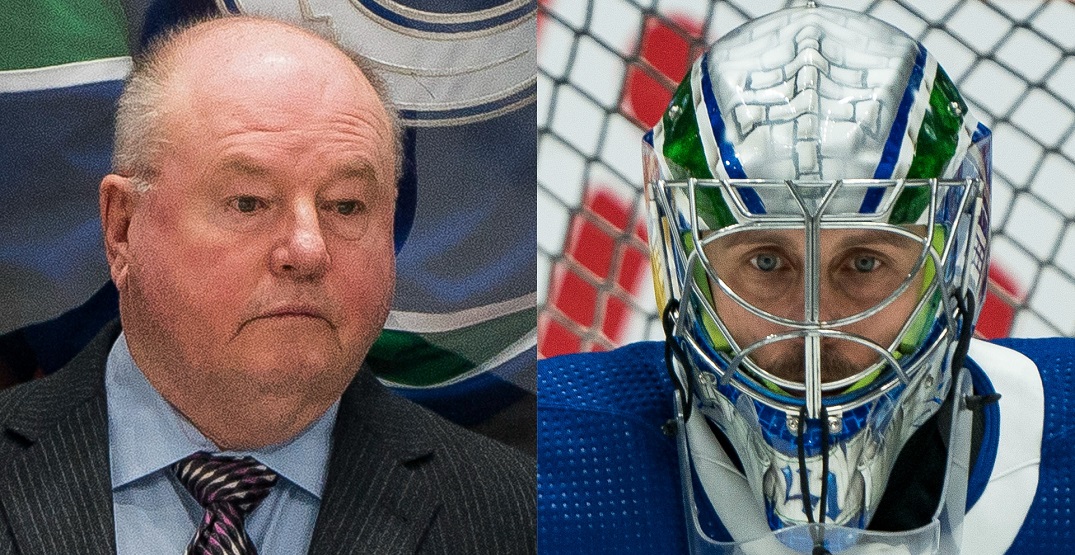 Vancouver Canucks goalie Jaroslav Halak hasn’t had the easiest stretch of his career this season.

In 13 appearances after signing this summer, Halak has put up just an .886 save percentage to go along with a 2-6-2 record. At 36 years old, Halak’s best days look like they’re well behind him, with his days in the NHL looking numbered. He hasn’t played a full 60 minute game in nearly two months, with his last complete appearance coming on January 31.

During Saturday night’s loss to the Calgary Flames, Halak was thrown into the Canucks’ net in relief of Thatcher Demko with his team down 4-0 heading into the third period.

With Halak the probable starter on the second half of today’s back-to-back game, a disagreement with coach Bruce Boudreau began when the goaltender was notified he’d be playing the third period on Saturday. The pair appeared to jaw back and forth at each other a little as they exited the bench following the conclusion of the second period.

Here is the video HNIC showed after the game of Halak being told by Boudreau he was going in for the third. Unfortunately I missed Bieksa's commentary at the end. Again super tough look from Halak. #Canucks pic.twitter.com/BmoycwzEuI

Former Canuck and current Hockey Night in Canada analyst Kevin Bieksa offered up an explanation for the incident, which was Halak’s first appearance since February 28.

“You guys know I can read lips,” Bieksa said. “He said, ‘I’m going in? What, me?’ And then he looked at [Canucks trainer Brian Hamilton] and said, ‘Why am I going in?’ He obviously wasn’t happy about it. He’s thinking about [Sunday]… ‘am I not going to get to play [Sunday]?'”

Asked about the clip postgame, Boudreau wouldn’t offer much of a reaction.

“I don’t know. You saw the clips, I didn’t,” Boudreau said. “I wanted to save [Demko], the poor bugger’s in there and facing breakaways after breakaways, and he didn’t deserve — he doesn’t deserve that, he’s been too good for us.”

The Canucks are slated to host the Buffalo Sabres this evening, with puck drop set for 7 pm PT. No starter has been announced yet.