Hacksaw Ridge is one part faith-based flick, two parts war hero biopic, and one thousand parts being blown to pieces. America is going to love it.

Welcome back, Mel Gibson. Drunken stupors aside, the man knows his way around a movie set having made and starred in some incredible films over the years. His newest project is a biopic about American war hero Desmond Doss, the first conscientious objector to ever earn the Congressional Medal of Honor.

Films like these can be nice reminders of the price that many soldiers paid for our freedom. It’s fitting that it opens just before Remembrance Day here in Canada, and Veterans Day in America. The film stars Andrew Garfield, Teresa Palmer, Sam Worthington, Vince Vaughn, and Hugo Weaving. 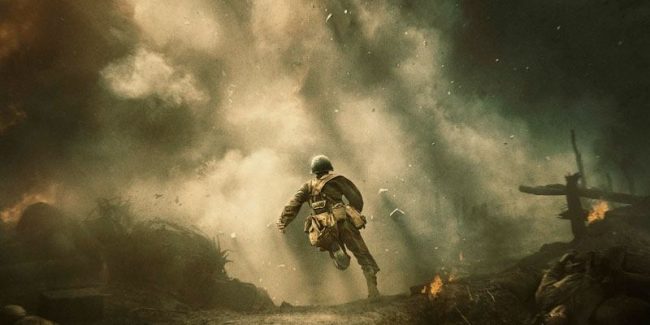 This wartime epic provides a grim reality check of the ugliness of war and what the US Military encountered in Okinawa during WWII. Soldiers had to ascend a jagged 350-foot ridge called Maeda Escarpment (AKA Hacksaw Ridge due to the amount of men they lost) and then immediately defend their position against an onslaught of Japanese soldiers who were deeply entrenched on the island.

Doss spent most of his time in the military ducking bullets of a different variety. All the man wanted to do was serve his country and remain true to his Seventh-day Adventist beliefs by not carrying or using a weapon. What he got in return was predicted abuse and brief prison time, but in the end, they gave him his opportunity to be a medic and a chance to run straight into battle to save lives opposed to taking them. 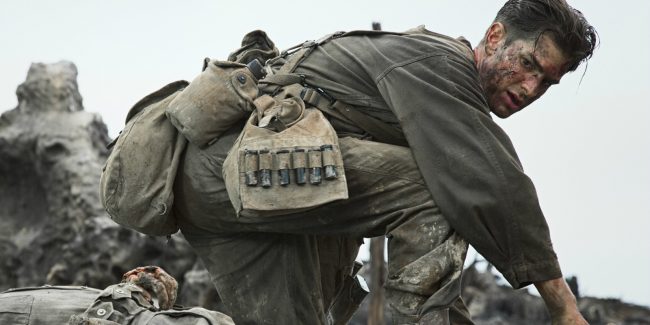 It’s such a fascinating story, and who better to direct than Mel Gibson who has no problems inserting a few Bible verses into his films right alongside someone being decapitated. Gibson’s movies are usually violent, and Hacksaw Ridge spares no expense in that department with some of the most gruesome battle scenes you will see on screen.

Hacksaw Ridge showed up on my radar when I started to hear some online buzz about it during its festival run, and let’s be honest, Mel Gibson’s comeback is equally as fascinating. However, there were rumblings this film got standing ovations and some critics were calling this an Oscar candidate. So, unfortunately, I went into this film with high hopes and came out slightly disappointed. 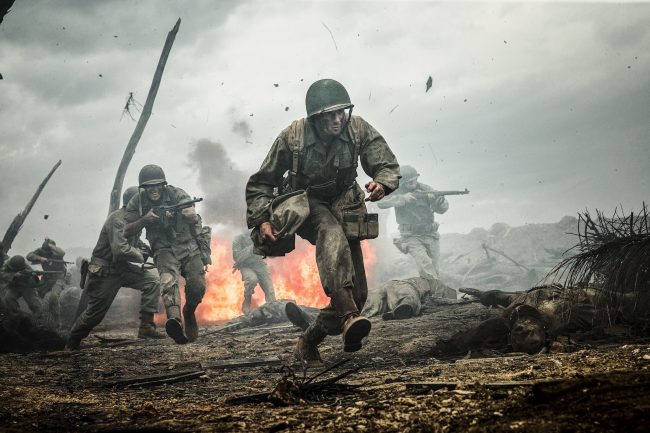 This is not an Oscar candidate (at least in my humble opinion), but it’s a film that will do well in the United States and amongst the evangelical crowd. This is a faith-based movie and I’m not going out on a limb when I say that, but some of the religious crowd might have a problem seeing those limbs being removed. But, nonetheless, I’m okay with the graphic violence and subtle Bible thumping if the story delivers.

The first half of the film moves at a slow pace and feels very “oh shucks” as we get to know the good ol’ Christian boy Desmond Doss played beautifully by Andrew Garfield. If you can get past some of the corny dialogue and the religious undertones, you can survive this film.

Don’t take my disappointment as me saying this is a terrible film. It’s definitely worthy of having eyes on it as it’s a pretty incredible true story. Even Hollywood couldn’t “Hollywood’ize” the atrocities that this man went through.

Whether you agree with his religious views or not, the fact that Doss had the courage to stand up for his beliefs is rather inspiring. But what shouldn’t be lost in all of this is the time he spent saving badly injured soldiers that most would have left for dead on the battlefield. 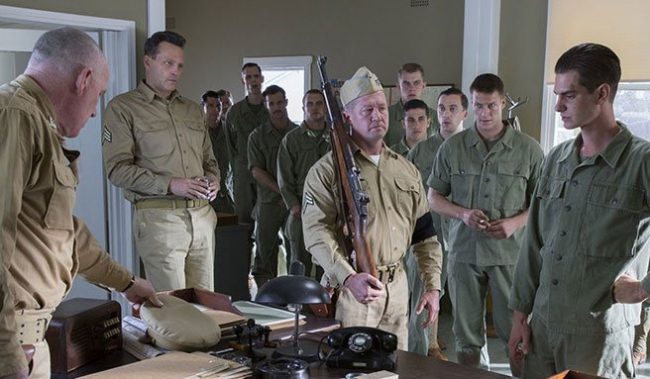 As far as individual acting performances go, Both Hugo Weaving and Vince Vaughn were standouts for me. Vaughn actually gave one of his best performances of his career and it’s Desmond’s father (Hugo Weaving), a WWI vet, which gives us another grim reminder of the after effects of war that we now know as PTSD. Andrew Garfield was great too, even if things at times felt a tad melodramatic.

Small nitpick, there was some CGI that didn’t work either and you’ll notice it during the battle scenes. It’s probably why Mel Gibson has stated he doesn’t like to use a lot of effects in his movies.

Like I said above, if you can get past all the usual Hollywood tropes you get with these types of films, it’s not a bad movie to check out.

There is a niche audience for Mel Gibson’s faith-based movies, it’s why he makes a small fortune. There is even a Passion of the Christ 2 in the works (insert your clever sequel titles here). 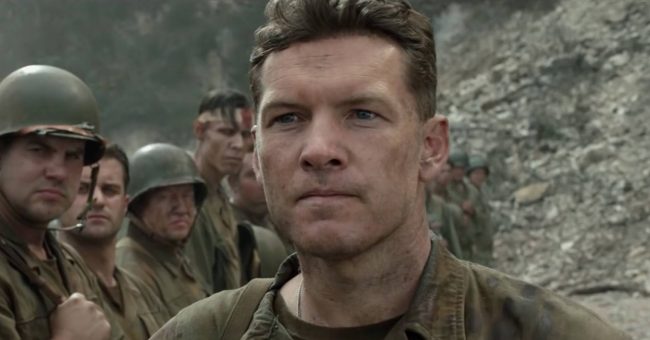 Hacksaw Ridge is entertaining enough, action packed enough, and God fearing enough that you’ll at least appreciate the story. I had some issues with the cheesiness, and formulaic storytelling to say this is a great film but go check it out for yourself. You don’t need to see it in a theatre setting like I suggested with Doctor Strange.

Giving this 3 battle-scarred popcorn pieces out of 5.

Film plays at a theatre near you, Rated R, 131 minutes