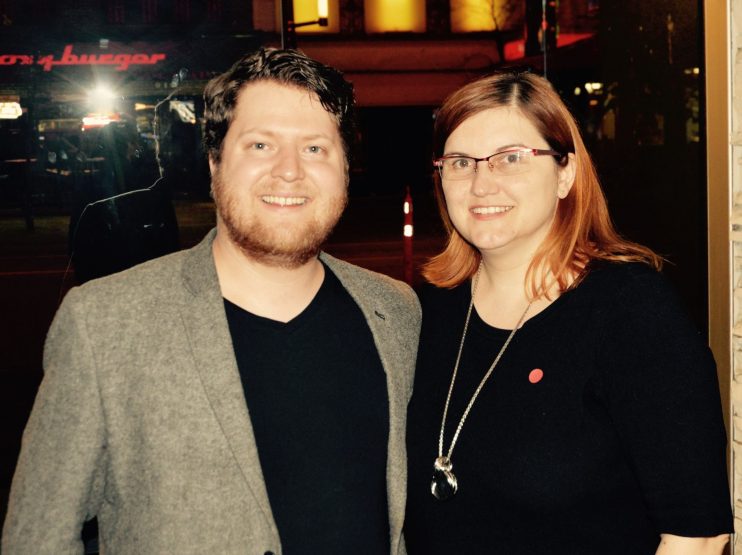 Ever imagined trekking through the Himalayas? Perhaps you are heading to Mount Everest base camp with some Sherpas carrying your gear. You will be in Nepal surrounded by the majesty and beauty of some of the highest peaks in the world. Now you are on Davie Street and find the Gurkha Himalayan Kitchen located on the second floor up a long set of stairs.

You can ascend to find the food of Nepal. The owner/chef Shiva Marahatta will carefully prepare for you the tastes of Nepali cuisine home-style. Nepali music will be playing to add to the experience. Vegetarians will love Nepali food, but meat eaters will enjoy this cuisine even more. 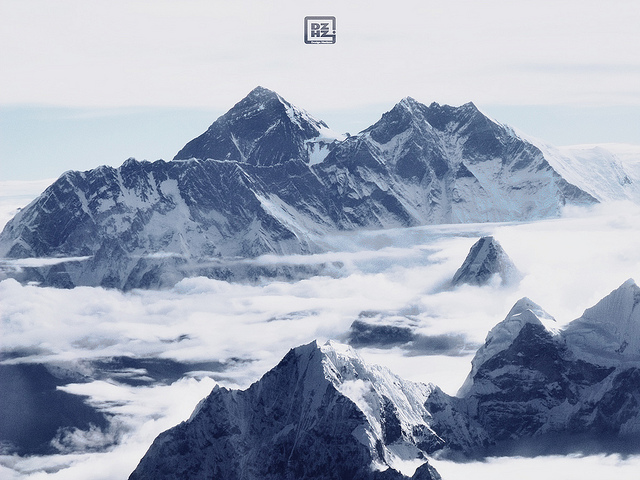 Geographically, Nepal is nestled between India to the south and west, Bhutan to its east and Tibet located to the north.  Shiva indicated that Nepali cuisine “is influenced by India and Tibet.” Gurkha Himalayan Kitchen provides authentic Nepali cuisine. Only one other Vancouver restaurant provides this cuisine, Café Kathmandu, but it covers other influences.

Owner/chef Shiva was born and raised in Nepal and opened his restaurant in March 2012. A number of spices and seasonings are used with most coming from Nepal and unknown to our chefs. The most used spices that North Americans would recognize are coriander, parsley and Szechuan peppers. All ingredients used in every dish are fresh. This appeals to many diners.

We decided to focus most of our eating on the Nepali dishes. As advertised, the dishes are much less spicy than its neighbour India. We ordered medium spicy and the results were some heat, but definitely tolerable and much less spicy than Indian cuisine. Shiva confirmed that they utilize “light spices” in Nepali cuisine.

Very extensive menu divided between Shuruwat (appetizers), Soups and Salads, Mukhya Khana (Entrées), Desserts and Beverages. Each dish is fully described so it is not intimidating to make your choices. The traditional sweet Mango lassi drink is yogurt-based, delicious and thick. It provides some relief from the spicier dishes.

We began with the appetizers. Aalu Achaar is a potato salad garnished with lemon juice, mustard oil and mixed with Himalayan herbs. Flavourful and much like similar Indian potato dishes. 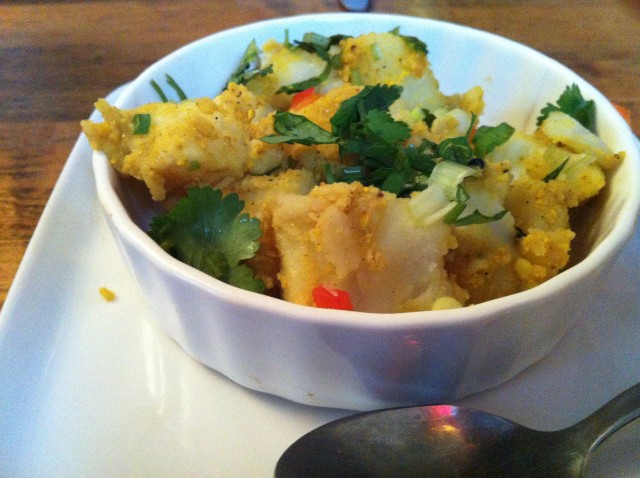 Gurkha Platter comprised four of the appetizer dishes. Chatpate made up of chickpeas and potato mix. Choila with diced char-boiled chicken, marinated in Nepali spices and herbs and served with cheura (beaten rice). Taas is grilled lean lamb meat, cucumbers and spices. The fourth dish was Piro Shrimp marinated in ginger-garlic and chili paste served on a skewer. Some tang, tartness, heat and huge variety of flavours. Lots to eat with each dish providing a unique taste profile. Great introduction to Nepali food and easy to share. 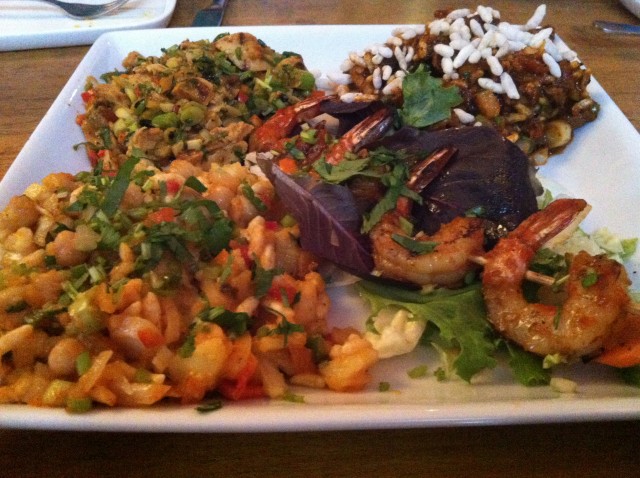 Most Asian cultures have dumplings. Tibetan Momos (dumplings) are so yummy! Basically, comfort food served with chutney sauces. A number of choices, inclusive of vegetarian and meat-based momos. We indulged ourselves in the steamed dumplings known as Dalai Lama Momo and Tenzing Momo. 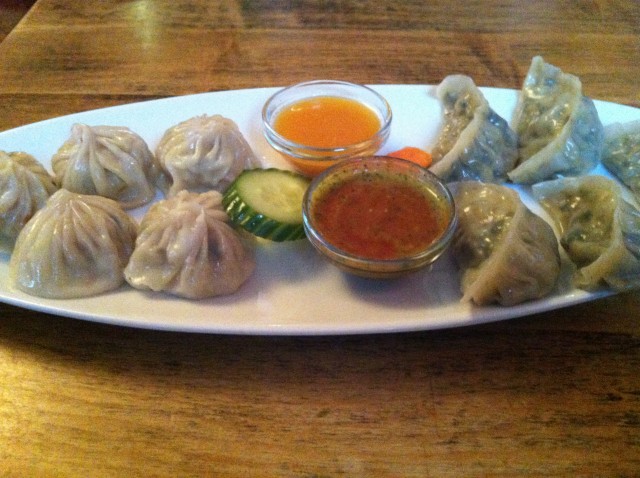 Another plate of Haku Momo (pan fried in special sauces and served with chutney). Our preference was the pan-fried momos. Again, we had vegetarian and meat-based momos with this order. This is an entrée dish and is quite filling. 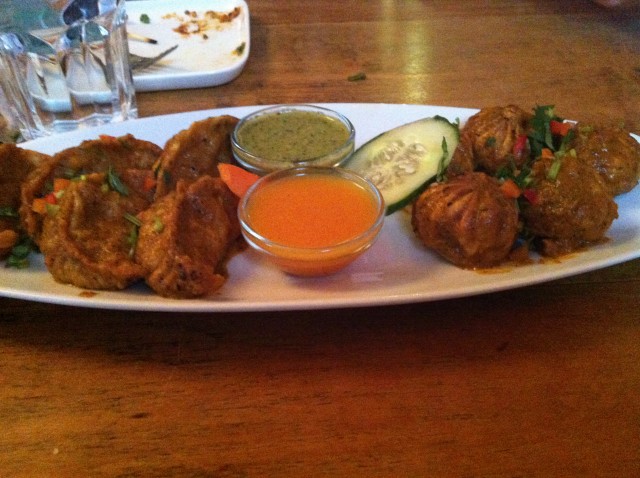 Next dish was the Pokhara Lamb. Boneless lamb marinated in yogurt, ginger-garlic paste and Nepali spices. It came on two skewers with dipping sauces. Wow! The meat was juicy, the barbeque spices divine and the dipping sauces enhanced the tastes. Got to learn this recipe for the next time we barbeque. 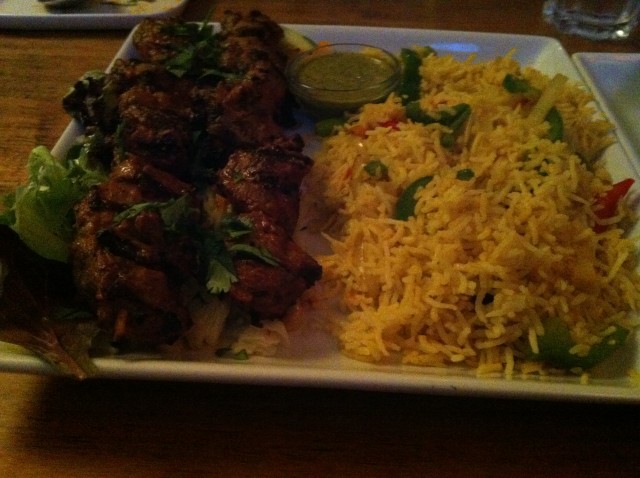 Gorkhali Khasi comprised of goat sautéed in various spices and Nepali curry sauce. This was recommended by Shiva as a great representation of a traditional Nepali dish. While the meat was tender and its sauce tasty, it did not inspire us like the other dishes. Looking for a remarkable taste, but it didn’t compare to the other dishes. 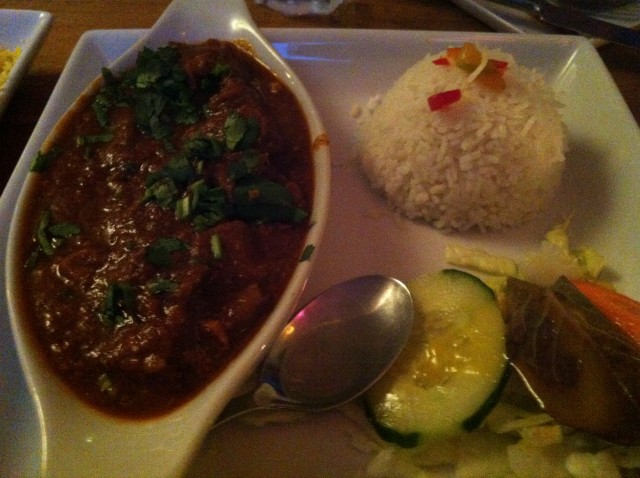 To ensure you have an authentic Nepali experience Shiva recommended the Nepali Bhojan (The Works). A full course meal including three vegetable dishes served with basmati rice, roti (bread), chutney, salad and raita (yogurt sauce). Similar to Indian vegetarian meals minus their spices and curries.  A lot of tastes that appeal to the vegetarian diets. Again, each vegetable dish was flavoured and unique. Great to compare each taste and try to figure out the spices being used. 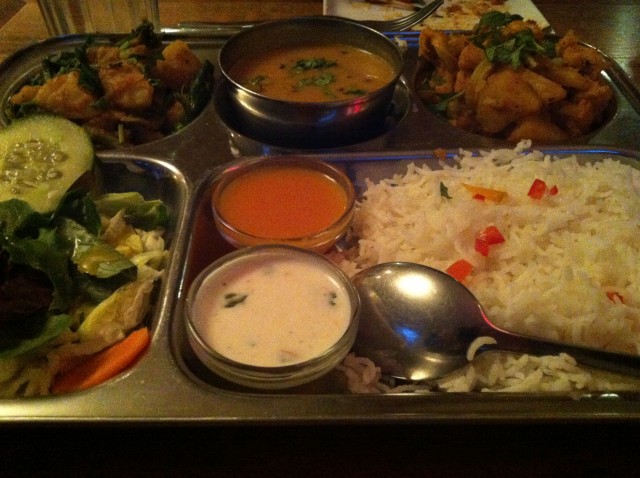 We were served a dish not on the menu. Tingmo is a yeasty Tibetan whole wheat steamed bread. It is slightly sweet and a texture that is not found in North American breads. Give it a try. It will complement some of the dipping sauces. 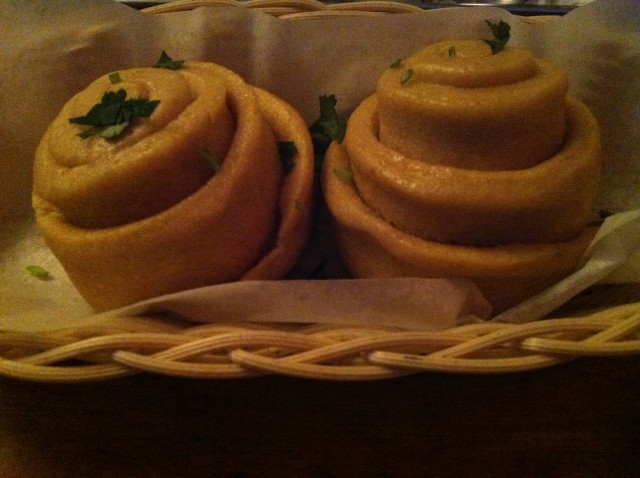 The favourite dessert at Gurkha Himalayan Kitchen is the Chai flavoured Crème Brulée. As you can see from the picture below, it arrived as a flambé exciting everyone in the restaurant. The chai spices dominate the flavour, but in a good way. Crust softer than its French equivalent, but it was scooped up pretty quickly despite the fact we were all pretty satisfied and full. 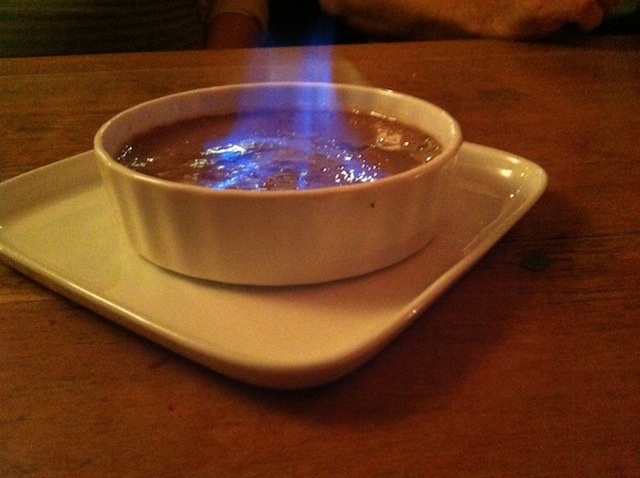 Nepali cuisine is unique from its neighbours, yet influenced in many ways by the spices and curries. Relatively small place with about thirty seats and a small bar. Prices for entrees range from $11 to $15 with very healthy portions. Parking on the street or next door at Shoppers Drug Mart. They do delivery for downtown residents and take out.