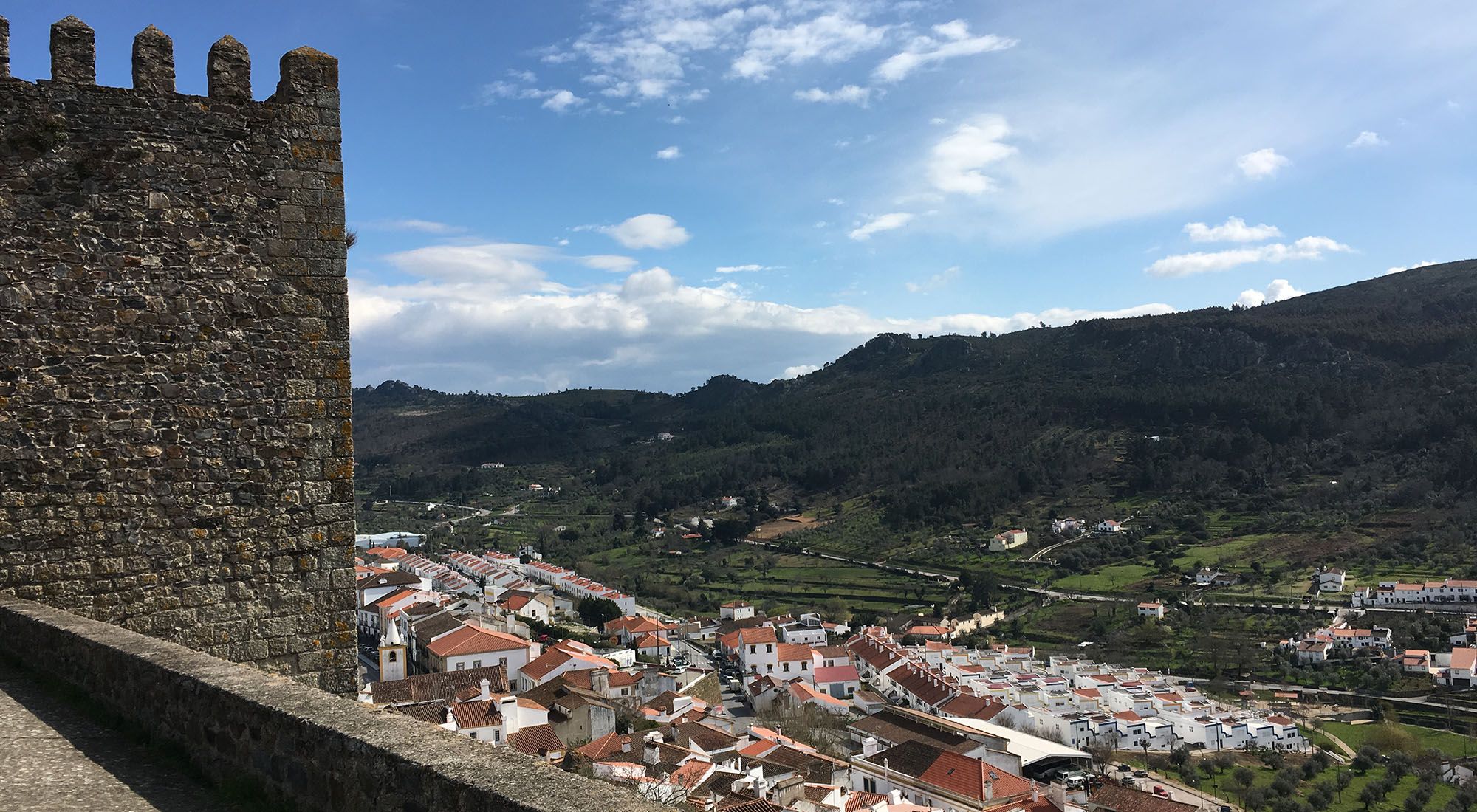 Alentejo is still underappreciated by visitors to Portugal, seeking Fado performances in Lisbon or perfect beach days in the Algarve.

And yet it’s a welcome relief from tourist crowds.

Only two hours out of Lisbon, Alentejo bears the remnants of its Roman and, later, Moorish inhabitants. Driving through the region one’s eyes are filled with soft green hills that occasionally erupt in granite and livestock lazing in the shadows of cork trees. (Their bark is harvested every nine years, and the trunks of freshly stripped trees look like pantless stick figures.) Other fields are strafed by tidy rows of vineyard grapes and olive trees.

Everything we eat and consume on our trip comes from its sun-dappled fields and pastures. Even the pink marble used in castles is sourced locally from quarries that can be seen during our drive. Forget about any farm-to-table crazes in Portugal’s bread basket. Here, lodgings are quarry-to-castle. 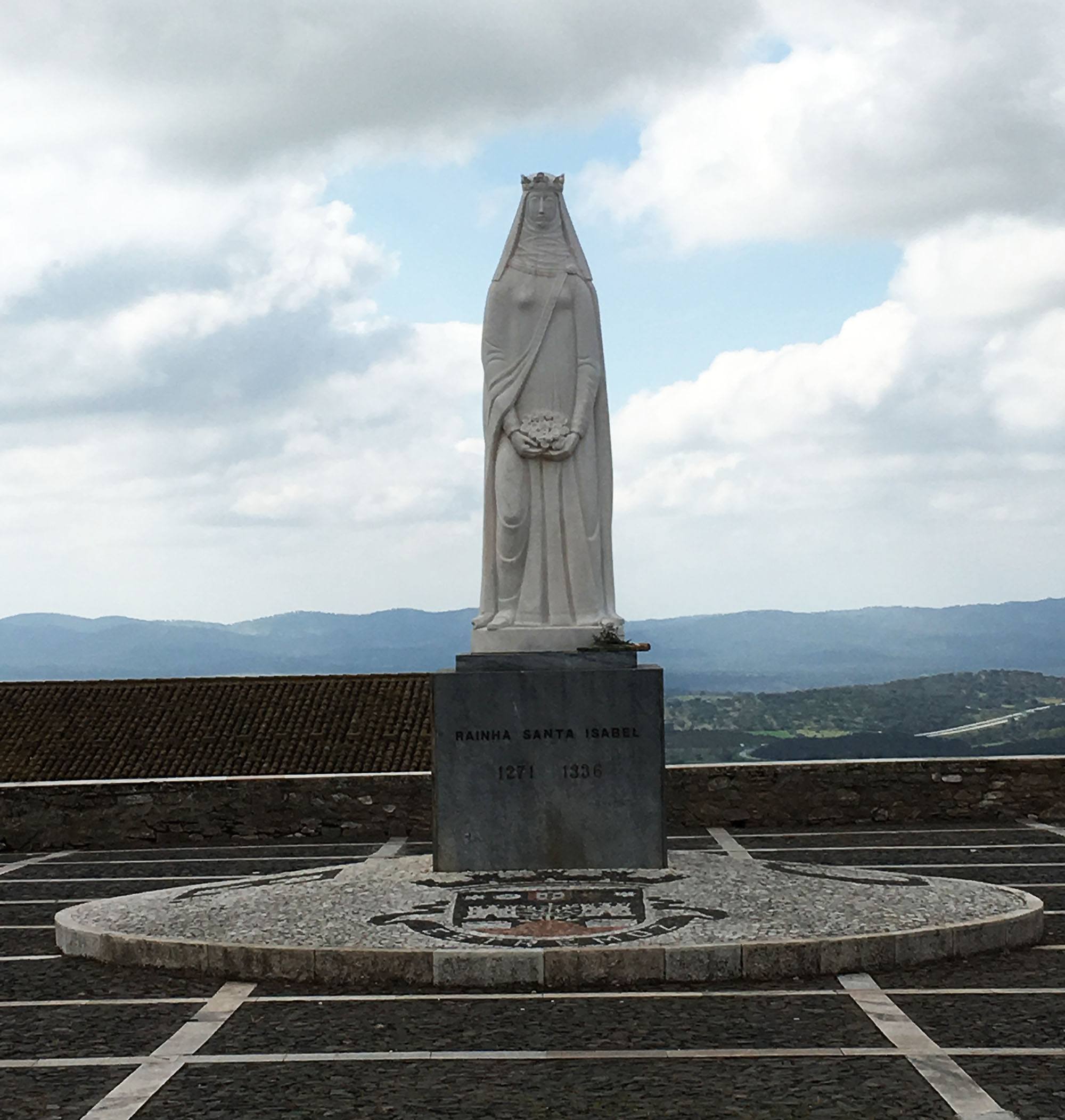 Outside of Estremoz Castle is a statue of Queen Isabel, for whom the castle was built. (Kevin Chong)

Built in the 13th century as a stronghold from Spanish attacks, Estremoz Castle contains a palace that King Dinis gave to Queen Isabel, who died here in 1336. Since 1970, it’s served as a pousada (a guest house converted from a historic building).

While the cramped elevator can barely fit one person and two pieces of luggage, your room will be predictably spacious. Ours came with a separate sitting room with a fainting couch and a gymnasium-sized bedroom adorned with religious oil paintings.

Once you’re settled in your room, check out the premises – a set of stairs will lead you to a billiards room. Continue until you find the marble Tower of Three Crowns (named after the three kings that built it). Climbing several storeys, you’ll reach a crenellated balcony that overlooks the countryside and whitewashed buildings—a storybook vista for any wannabe royal to scope their domain.

In a small room that shows off an expansive wine selection, this local eatery offers innovative, eye-catching renditions of Portuguese comfort food.

Their caldo verde is a good example. A standard menu item on most Portuguese menus, here a server decants the creamy kale and potato soup layered with crispy pieces of presunto (the Portuguese version of prosciutto).

Next to the restaurant is a deli where visitors can purchase local wine, bread, sausage, and cheeses.

9 am: Visit the Municipal Museum

After breakfast in the castle, stop next door at the Municipal Museum, where you will find local ceramic pots and figurines from the 18th and 19th centuries.

Drive an hour north to Marvao. This sleepy town is still enclosed by the stone walls built in the 13th century. From a gate, wander along a narrow lane until you reach the castle perched at one end of the village of 150 people.

The town’s main tourist attraction features a landscaped garden, a cistern from which a recording of Gregorian chants play, and wraparound views of the Spanish border and the Serra de Sao Mamede – all with free admission.

Another short drive will take you to Castelo de Vide. Avoid some of the tourist-y eateries around the main plaza and find lunch up a narrow side street. Service is slow and the friendly proprietor doesn’t speak English, but this locals-only eatery offers regional classics like beans with chorizo in set meals that include generous carafes of house wine.

Now that you’re full, explore the town’s castle, including its brick tower and the small garden and village contained within its walls.

Wander around the town’s historic Jewish quarter, which contains Portugal’s oldest synagogue. Down a cobbled street, in a square, take a drink from the Fountain of Vila. Built in the 16th century out of marble, the covered fountain offers the same mineral water that’s used in a popular brand of bottled water of the same name. In a country where restaurants only serve bottled water, this might be your only free drink.

7 pm: Dinner at Solar Do Forcado 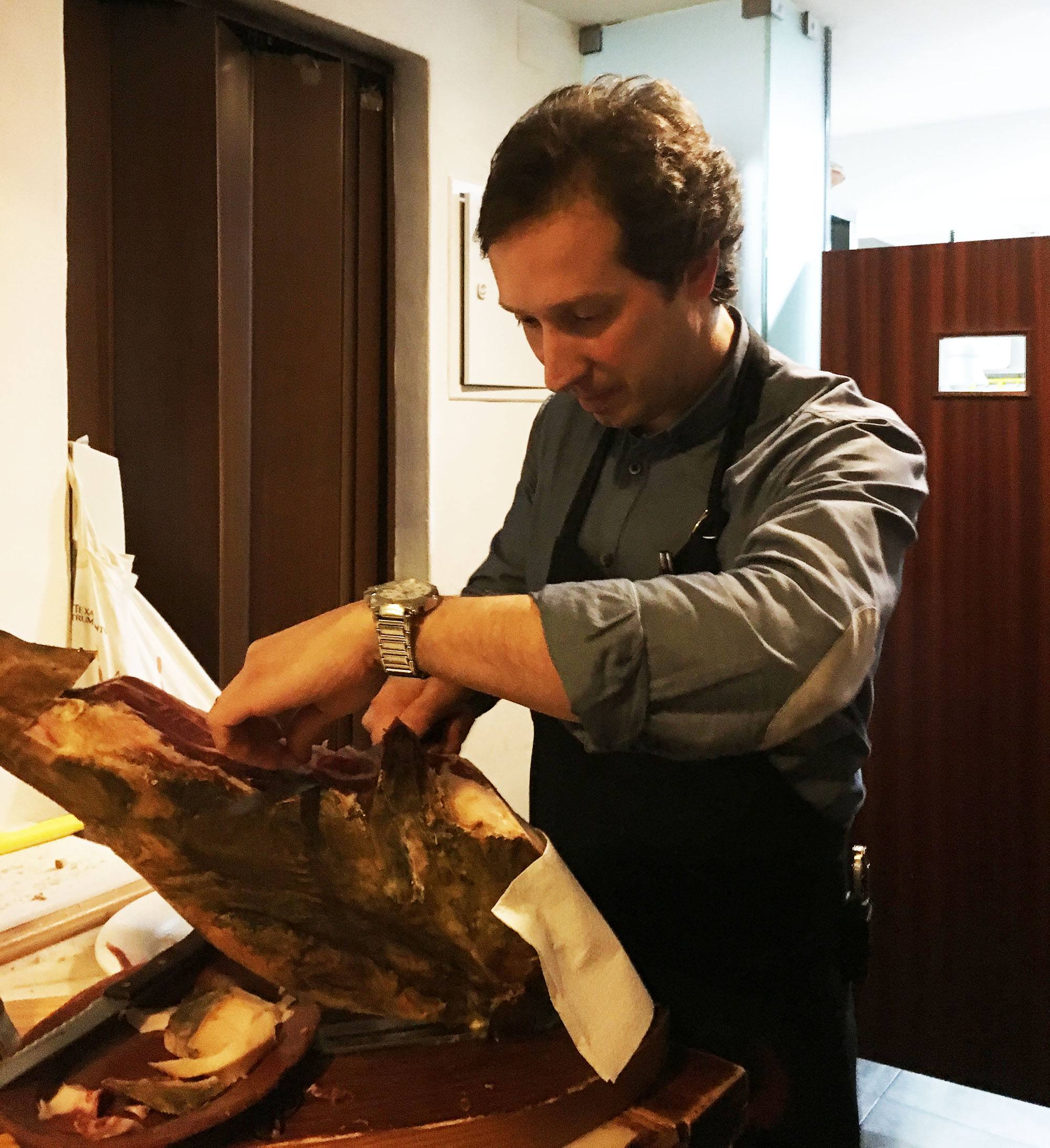 In nearby Portalegre, circling the type of cramped city centre that justifies Europe’s fixation on glorified golf carts as vehicles, seek out Solar Do Forcado.

The low-ceilinged room, bedecked with paintings of bullfighters (the restaurant’s owner was a forcado, the Portuguese version of a matador), is both a rustic eatery and a cozy temple for carnivores.

Behind a window, a man whittles slices of presunto from the leg of a black-footed pig (the sumptuous, free-range swine that lolls along this countryside), with the care of a sculptor. Skewers of meat arrive at table, dangling vertically from metal racks.

10 am: Coffee at the Roman Temple

Close out your visit to Alentejo with a stop in Evora. The biggest town in Alentejo, Evora has the most restaurants, gift shops, and buskers playing Pink Floyd during our visit. Guidebooks in Dutch and Spanish sit on the coffee tables in the outdoor cafe near the Corinthian columns of the Roman Temple (ca. second century CE). Once you arrive there, enjoy the views of the garden with a galao (coffee in warm milk) and pastel (pastries).

11 am: Visit the Chapel of Bones 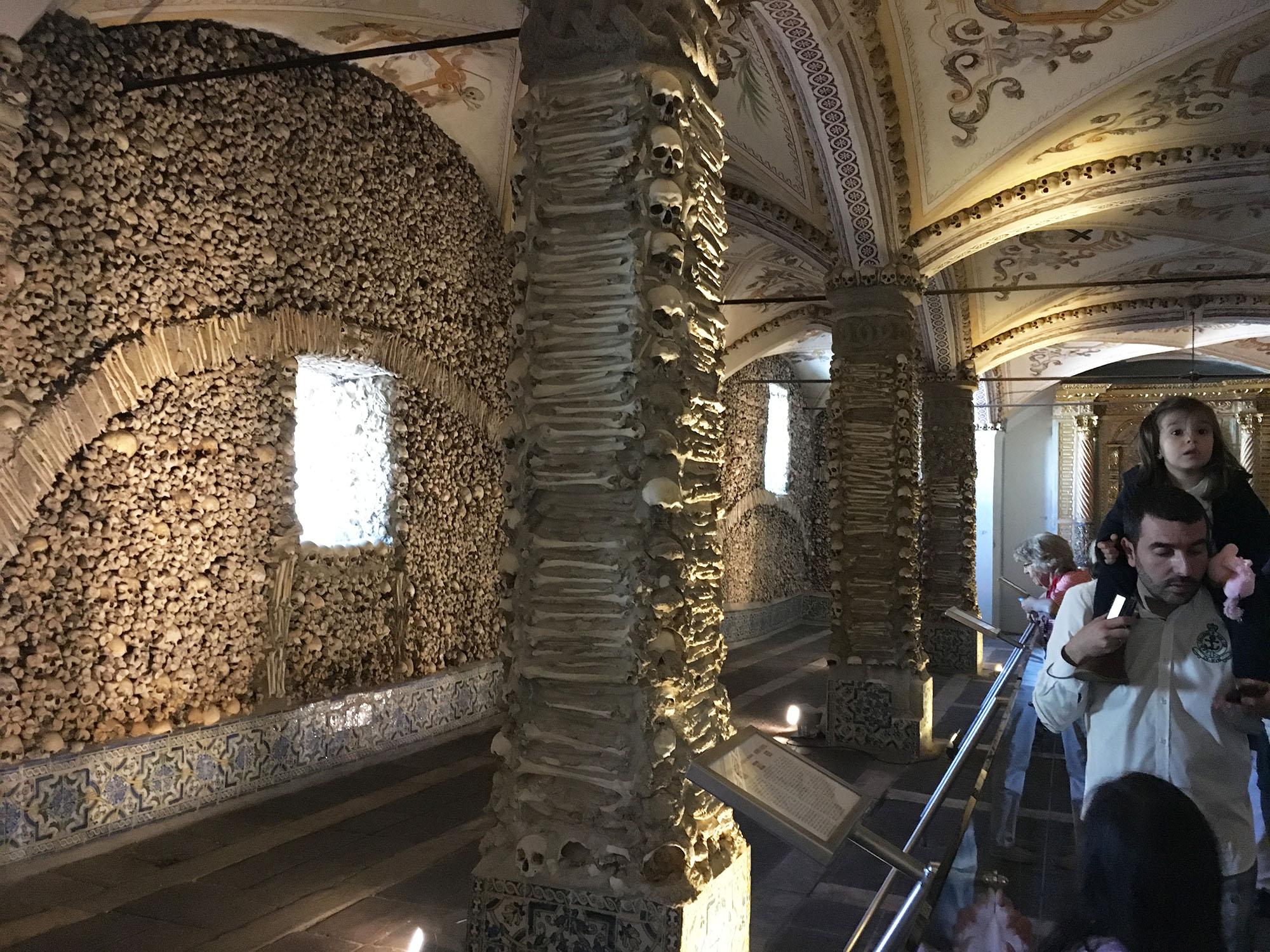 The Chapel of Bones was built from human remains. (Kevin Chong)

Visits to Europe involve too many trips to cathedrals, where one’s sense of wonder is dulled by repetition. This place is different.

The Chapel of Bones was built from human remains by a Franciscan monk in the 16th century. The entrance to this morbid holy place contains the inscription that translates to “We bones that here are, for yours await.”

Warning: don’t go here if you have nightmares easily. 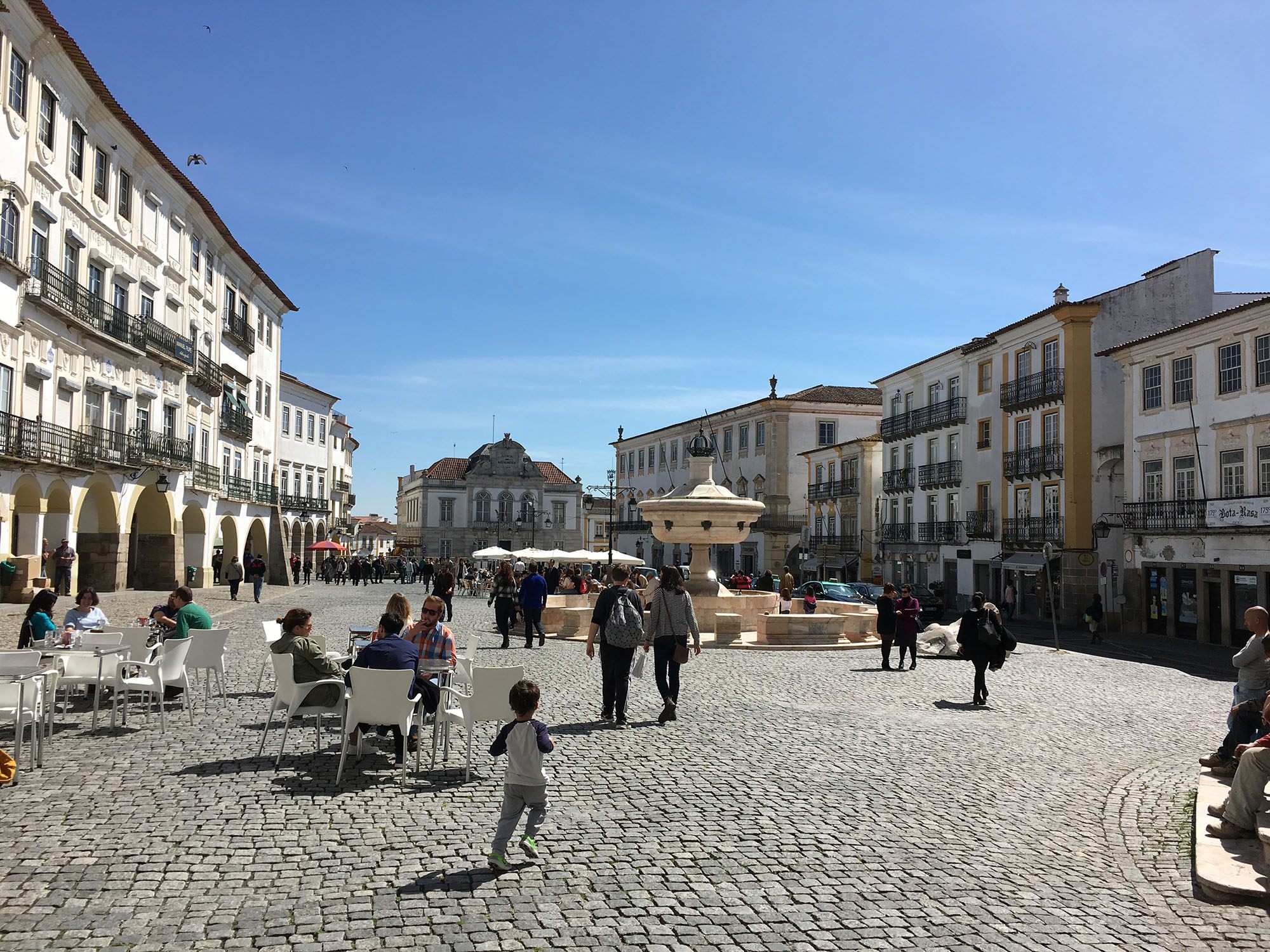 The Praca de Giraldo is Evora’s main square and the home of many shops and restaurants. (Kevin Chong)

In the 15th and 16th centuries, Evora’s main square was a focal point for the Spanish Inquisition and the site of the beheading of the Duke of Braganza.

Sit at Henriquina Fountain and people watch. Or have lunch outside at one of the main eateries. At Cafe Arcada, you can have a savoury snack or meal or try out a dessert, like a pastel de nata (egg custard tart), one of Portugal’s most famous desserts.

Located in what used to be an archbishop’s palace, Evora Museum offers more than 20,000 pieces of art, statuary, and archaeological relics from Evora’s millennia-spanning history. Highlights include Roman-era relics and a 13-panel series of Flemish paintings entitled Life of the Virgin.

Get your local handicrafts and trinkets on this shop-lined pedestrian street. At Montsobro, you’ll find the cork stripped from Alentejo’s trees used to make locally designed hats, purses, wallets, lampshades, umbrellas, and shoes.

Located outside the old city, this hotel is popular with families because of its indoor pool, daycare, and breakfast buffet. 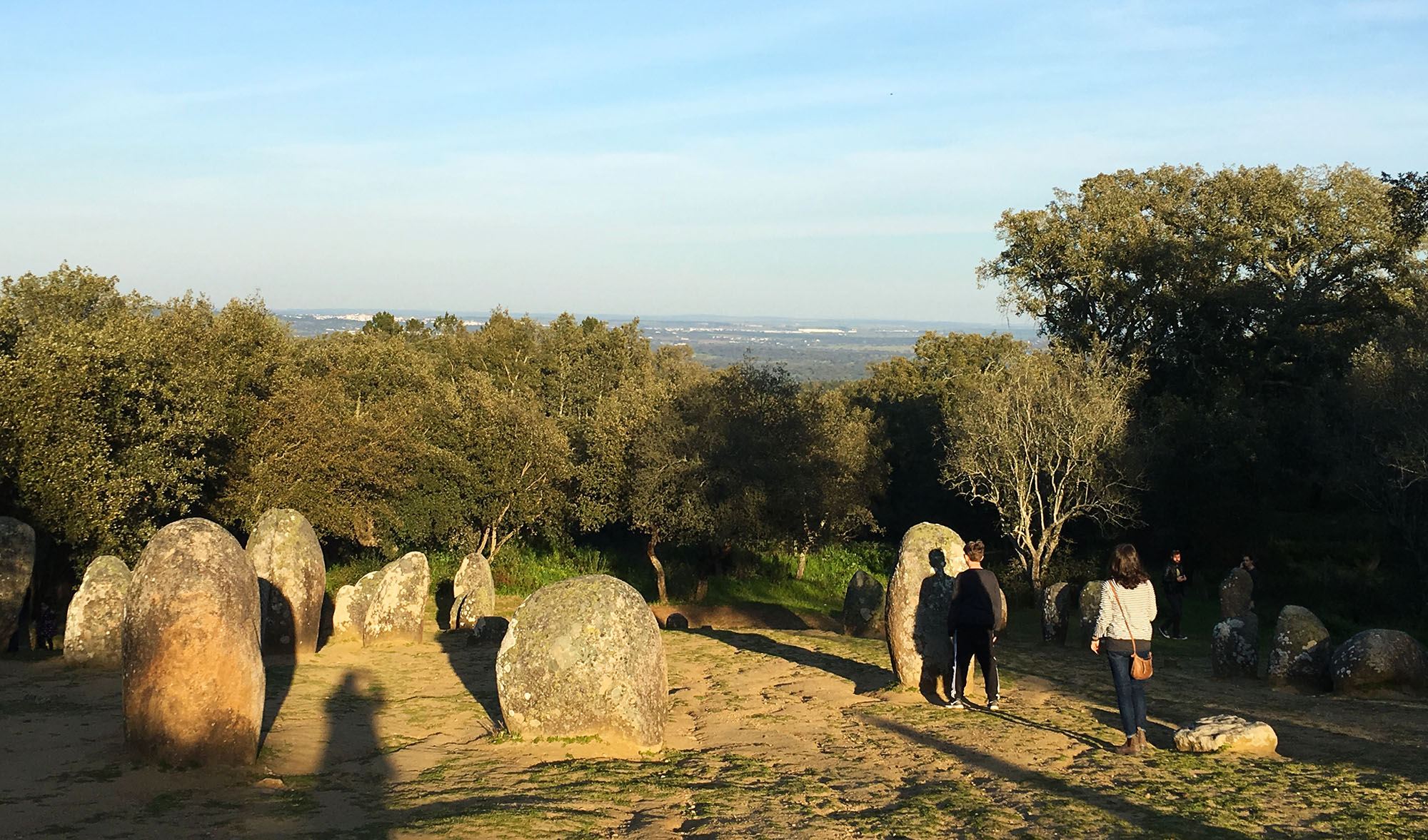 End your day outside the city in the Almendres Cromlechs, Portugal’s equivalent to Stonehenge. Watch the sun set on the circular formation of metre-high stones, located in a clearing surrounded by oak and cork trees, and which date back as far 5000 BCE.

On our visit, my wife and pre-teen stepson snapped photos of the full-sized shadow puppets they make on the granite monoliths, some still bearing faint carvings, as the sun set.

10 am: Visit the Cathedral of Evora

If you found the Chapel of Bones too much like the church Stephen King built, then this might be more your speed. The Cathedral of Evora was built out of granite in the 13th century in the Gothic and Romanesque style. Its subsequent additions and facelifts also highlight Baroque and Manueline motifs.

Imagine a historical site in the same place you go to get your dog permit. That’s what happened in 1987 when Evora workers found Roman-era baths in Evora’s City Hall. Stop for a quick visit, where you’ll see the circular laconicum (sauna room) well-preserved.

Outside the historic city, Cartuxa Winery is built on the site of a Jesuit retreat house. In a room that once served as the priest’s dining room, French oak barrels age the winery’s top brands, including the historic Pera-Manca label, which was used as a commerce product in Brazil in 1500.

Alentejo’s blazing summers and variety in soils produces an abundance of spicy red wines with fruity overtones. Our wine tasting prompts us to dash off to the gift shop, where we meet our customs alcohol quotas for the trip home.