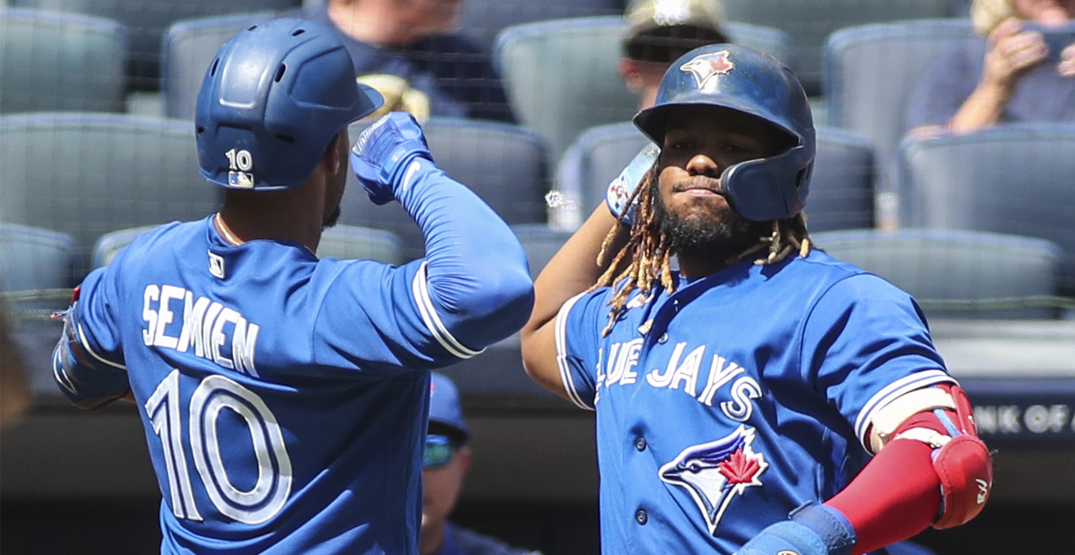 Two of the biggest bats for the Toronto Blue Jays proved why they’re two of the best hitters in the American League this season.

Both Vladimir Guerrero Jr. and Marcus Semien set new franchise records for the Blue Jays during their eight-run rout of the Yankees this afternoon in New York. Vladdy crossed the 40 home run threshold, and Semien contributed a pair of homers, reaching 37 long balls on the season.

At 22 years old, Guerrero is the youngest Blue Jays player to hit 40 home runs in a single season, and he’s only the 10th player in club history to surpass the 40 home run mark.

By the way, Guerrero is one of only 10 players in MLB history 22-years-old or younger to hit 40 home runs in a single season.

Next up is Semien, who along with Guerrero, should garner plenty of American League MVP conversation in the coming weeks. The Blue Jays second baseman clubbed his 36th and 37th home runs on the season, setting a new franchise high for home runs by a Blue Jays middle infielder.

Aaron Hill previously held this franchise record, as he broke out for 36 home runs as a second baseman during his 2009 season with the Blue Jays. With three-plus weeks left in the 2021 campaign, there’s a chance for Semien to cross the 40 home run threshold as well.

The Blue Jays haven’t had multiple 40-home run hitters in a single season since Jose Bautista and Josh Donaldson both went yard 40-plus times during the team’s magical 2015 run.

With their latest victory over the Yankees, the Blue Jays inched further up the Wild Card standings and sit 3.5 games behind the Bronx Bombers for the first Wild Card spot.