Mason is an “ancient and battle-scarred” cat that is one of the oldest surviving feral cats the Vancouver-based group Tiny Kittens has ever seen.

Removed from a derelict barn with about 60 other feral cats, this old soldier had a broken tail, teeth that required surgery, multiple infections and was diagnosed with terminal advanced kidney disease. 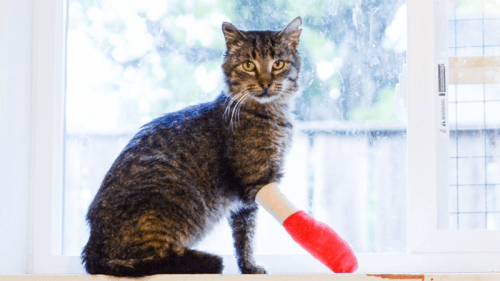 Mason after being rescued.

Knowing it was unlikely he would survive the winter, the group had two options: euthanize him, or give him a chance to adjust to life in a home and provide hospice care for as long as he had left.

They chose the latter.

“Mason’s many scars told us how hard he had fought to survive this long, and we were determined to give him a chance to experience comfort, safety and freedom from pain during his sunset months,” said founder Shelly Roche, who brought Mason into her home.

Mason considered all humans predators, and avoided all contact with everyone he met, including Shelly. But a change awakened in the grumpy old man when Shelly brought home a litter of kittens on a “field trip” to socialize them.

The kittens invaded Mason’s personal space, and he just “melted,” even cuddling up together for a nap. Shelly filmed the interaction, which has now been viewed nearly a million times. 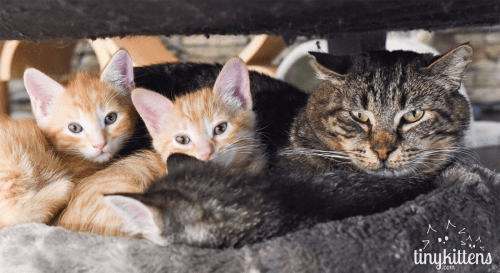 “I was right there next to them, holding my breath and expecting him to hiss or growl and then slink away to hide under the couch. But when Scrammy (ginger kitten) started licking Mason’s ear, and Mason leaned into it, I completely melted. The one thing missing for Mason had been contact with another living being, and while he didn’t want that from me, he had clearly been craving it from his own kind,” she said.

The kittens now do daily field trips with “Grandpa Mason” now, and get lots of snuggle and play time together. They chase each other around the house, and he gives them tongue baths before flopping on the floor like a giant kitten. 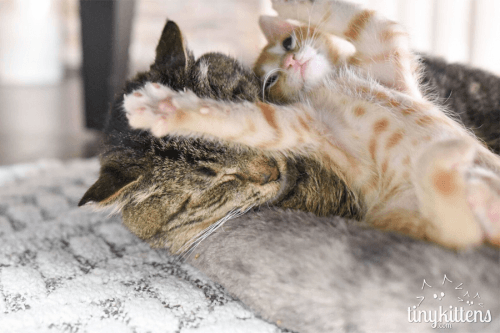 Mason’s kidneys are continuing to decline, and he likely only has a few months left, although they will be very happy ones with his new adopted kiddos.

Tiny Kittens is using Mason’s story to help raise awareness about the thousands of feral cats in the region – the hardships they face, the love they have to give – and the fact spaying and neutering is an easy way to prevent the suffering that results from cat overpopulation.

“He shows us that old, broken, ferocious, ‘lost cause’ cats still have value and are worthy of compassion,” Shelly says.

The group believes that by rescuing feral cats and telling their stories through their wildly successful social media streams, they can spark conversations about responsible pet ownership and compassion across the world.

Grandpa Mason continues to melt hearts with his foster kittens! Mason is an ancient, battle-scarred feral cat who is spending his sunset months in our care. He has adjusted remarkably well to the life of luxury indoors, but his ferocious feral instincts with humans are too strong for him to be adopted. We were not expecting him to be such a marshmallow when he met our foster kittens, but they just adore each other! We’re so happy he can still experience love and companionship on his terms, while he gets the medical care he needs to keep him comfortable. Mason has advanced kidney disease, which is terminal. He wouldn’t have survived the winter in his feral colony, so we’re happy to be able to give him a comfortable life for as long as we can. He’s getting the best medical care, a special diet, and we’re monitoring him very closely for changes. <3 More about our rescue work: TinyKittens.com Watch rescue kittens LIVE 24/7: TinyKittens.com/live. See more #adorable videos of them on our Facebook page – Facebook.com/TinyKittens

Today’s ridiculous adorableness with Grandpa Mason and his foster kittens 😍