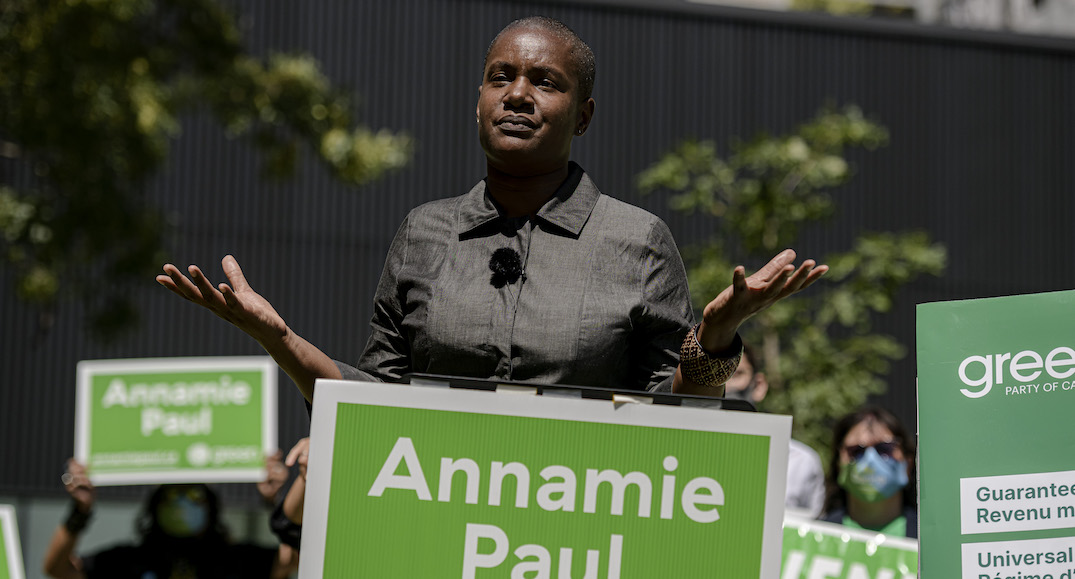 The Green Party lost ground in Monday’s election, with Leader Annamie Paul losing her third bid for a seat even as the party elected its first candidate in Ontario.

Paul had seen a swell of support in last year’s byelection, when she drew 33 per cent of the vote and came in second behind Liberal Marci Ien. But that support appeared to deflate on Monday, with Paul falling far behind her main rivals.

“Certainly I am disappointed. It’s hard to lose, no one likes to lose,” Paul told a modest crowd of supporters early morning hours Tuesday.

“But I’m so proud of the effort, the creativity, the innovation that our team brought to this race.”

The Green Party leader also lauded her party’s victories in Saanich-Gulf Islands, where her predecessor Elizabeth May was re-elected, and in Kitchener Centre, where Mike Morrice secured a landmark win for the Greens.

Incumbent Paul Manly was defeated  Tuesday in Nanaimo-Ladysmith, one of the two seats the Greens held when Parliament dissolved.

The party also failed to regain the Fredericton seat it lost when Jenica Atwin defected to the Liberals this summer. Atwin crossed the floor in June after clashing with the Greens and their leader over the Israeli-Palestinian conflict.

The Greens failed to gain momentum during the campaign even though climate issues were a key topic. The party also didn’t run a full slate of candidates, with Greens on the ballot in only about two-thirds of the country’s 338 ridings.

Paul acknowledged during the campaign that infighting within Green ranks — which included a failed attempt to oust her weeks before the election was called — has helped erode the party’s support at the polls.

The party requires a vote on the leader within six months of an election, making Paul’s position even more precarious following Monday’s vote.