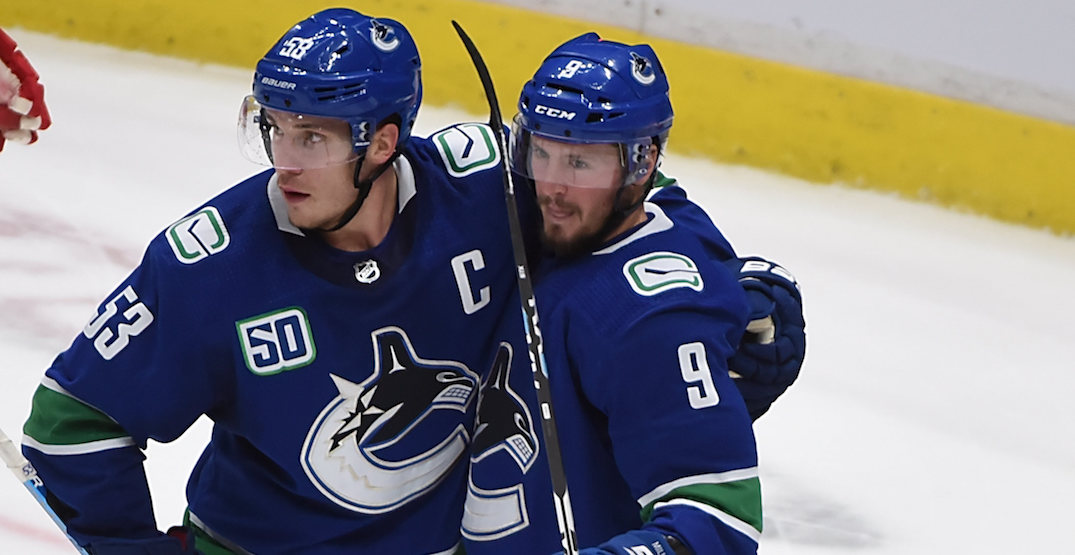 Prior to Friday night’s game against the Columbus Blue Jackets, the Vancouver Canucks were united in their belief that any suggestion that their room isn’t united is untrue.

A report this week suggested that the Canucks dressing room was divided, with players siding with Bo Horvat or J.T. Miller — or neither. The report was qualified by saying it was unclear if there was any sort of personal conflict of campaigning going on between Horvat or Miller.

Either way, it was a bad look for a team that has fallen apart this season.

Travis Green came out strongly against any suggestion that there’s a rift between his players, and specifically described Horvat and Miller as “good friends.”

“We’ve heard a lot of things lately that are going on inside our locker room,” Green told reporters in Columbus. “They’re fabricated, they’re made up… They’re lies.

“We’ve got a close group in there. I heard something about Horvat and Miller yesterday, which is ridiculous… They’re good friends, they get along, they care for each other. There’s zero rift at all between anyone on our team. They’re a close-knit team. They want to win. They don’t like losing.”

The Canucks have done a lot of losing this season. With only six wins in their first 20 games, they’ve started slower than any other Canucks team since 1997. That’s the same year the Canucks dressing room was divided by those that sided with Mark Messier and others that were in Trevor Linden’s camp.

Green was convincing, however, in his assertion that Horvat and Miller are good buds.

“They’re very good friends. They hang out a lot. I see them together a lot,” said Green. “When I heard a story was floating around about the two of them being separated, I couldn’t help but laugh and think about how things like that can get started.”

Myers, who also met with the media, was very believable with his answers.

“They’re complete nonsense,” Myers said about the rumours. “It’s annoying when you hear things like that just based on how untrue they are. It’s just more noise that you hear about and you just ignore… It’s frustrating just because there’s no truth to it at all…

“Let’s just put that to bed. It’s complete nonsense. There’s just no merit to it at all.”